Perspecta's View: Six Steps for DES to Capture Innovation
Skip to Content
Get all our news and commentary in your inbox at 6 a.m. ET.
Ideas
The Americans Who Volunteer to Fight ISIS

'A lot of people come over here thinking they’re going to be Rambo. It’s not like that.'

By Roc Morin
Journalist based in New York

The village had no name. Everyone who had known the name of the village was now dead or had fled. When the Kurdish peshmerga fighters had recaptured the settlement from ISIS that spring, it was so full of booby-traps that they just torched the place rather than deal with it. The town was abandoned now—just somewhere for the men to come scavenge.

“This one’s my house,” Christopher Smith grinned. The former Marine corporal gestured with his battered AK-47 toward a fire-gutted jungle-green villa. All the buildings were like that—vibrant non-sequiturs of blue, yellow, purple. “It’s like Super Mario World,” the 25-year-old remarked.

While thousands of Europeans and North Americans have joined ISIS, at least a hundred Westerners have enlisted as fighters against the terrorist group. Compelled by reports of the Islamic State’s gruesome activities, the first volunteers came in the fall of 2014. They have enrolled in a number of regional militias including the peshmerga—the government-backed army of Iraqi Kurdistan under which Smith currently serves.

The village we walked through was slowly turning back into desert—disappearing by the truckload as its wreckage went to fortify the Mullah Abdullah frontlines two kilometers away. The end of Kurdistan is marked by a dull earthen rampart studded with the bright dreamland fragments of the nameless village. Seven hundred meters beyond, across a minefield, is the Islamic State.

Two months before that day in December, Smith had been a brick mason living in Vermont with a fiancée. That was all over now. “I took the wrong bus to Miami,” he joked. In fact, the American had flown to Sulaymaniyah, Kurdistan, on a one-way ticket. With his military papers in hand, the veteran had walked into the Ministry of Peshmerga Affairs and enlisted.

While there is no specific U.S. law against fighting with a force like the peshmerga, the State Department has explicitly discouraged it. After he left, Smith said he called the FBI, notifying the agency of his whereabouts. “They knew I was here,” he insisted, “but they still felt the need to wake up my mother in the middle of the night and give her a heart attack.”

The American spoke of ISIS atrocities, the stories that had troubled his sleep back home: the beheadings and crucifixions, the slave markets, the rape camps—an evil that overwhelmed his senses. It was the reason he had come to fight, and like many of the volunteers I met, he was not here just to kill Daesh (a derogatory term for ISIS)—he was here to send Daesh to hell. The foreigners hunted wild boar to supplement their rice rations and made sure that every round fired in anger was coated in the animal’s unholy blood.

Hell is real here. The black inferno rages just beneath our feet, my translator warned. Everything is known from scripture. The flames have been measured, he insisted, and they are 69 times more painful than terrestrial flames.

There were always two wars going on—the one we could see, and the one we could not. Over 1,300 years ago, the prophet Muhammad spoke of the world’s final hour. The armies of Rome, he said, will be lured to the plains of Syria and annihilated. Only then will the Mahdi, the messiah, descend from heaven to defeat the cycloptic antichrist, Dajjal. Every phenomenon here is infused with mystical significance. ISIS distributes photographs of one-eyed babies, and the pesh commander at Makhmour, a hundred kilometers away, reports recurring nightmares of Kurdistan’s capital underwater—a city of corpses carried deep into the earth by an inescapable current. 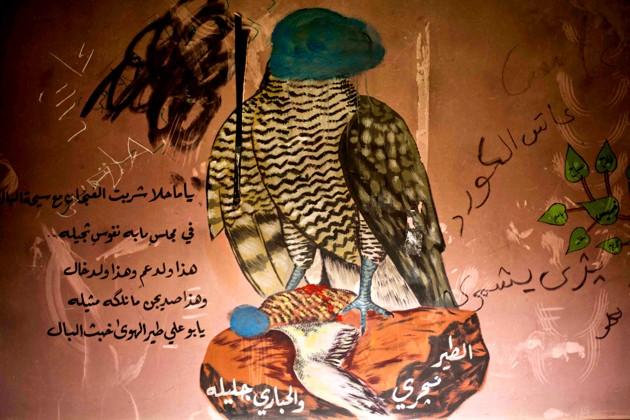 A censored mural of a raptor (Roc Morin)

There were always remnants of that other ethereal war. The Shia mosque here had once been decorated with murals of humans and animals, until the jihadists came to paint blue circles over every face. Depictions of living things are considered by radical Sunnis to be idolatry. On this wall, men with blue orbs for heads ride off into battle and a blue-headed raptor perches victoriously above his dead blue-headed prey.

“Angels do not enter a place where there are images,” my translator informed us. Then he started rapping, “I got my angels on my shoulders and a quarter of that angel dust.” The 30-year-old alternated continually between Quranic verse and Lil Wayne lyrics. “When I listen to Lil Wayne, I feel my faith decrease,” the pious Muslim lamented. “Sometimes I forsake him, but I always go back.”

Azad, a volunteer who identified himself only by his nom de guerre, had departed the land of Lil Wayne eight months prior. He left his family, his job, and his given name back in Texas. The 46-year-old said a prayer one night and the Lord directed him to join the YPG—a group of communist guerrillas in Syrian Kurdistan, separate from the peshmerga.

“You show up in [Iraq] at four in the morning with a $150,000 [ISIS] bounty on your head,” Azad recalled. “You’re supposed to meet someone in an airport parking lot, but you don’t know who. You’re in the back of a car, and every time it stops, you’re afraid you're going to end up on a milk carton. When you get to the safe house, you’re feeling a little bit better, but only when those guys go to sleep—only when you hear them snoring, can you kind of relax a little bit.” In his sleep-deprived mind, Azad conjured up a series of frightening scenarios. Maybe terrorists had killed his intended hosts and taken their place. Maybe his hosts were planning to sell him to ISIS themselves.

After being smuggled into Syria, the Texan was sent directly to the front. “I was never combat trained,” he confided, “so I worried that I wouldn’t be good enough. When I got there though, I realized that just by being an avid hunter I knew more than most of them did. My first thought was, ‘Great, I’m not the weakest link.’ Then I thought, ‘Fuck, I’m not the weakest link.’”

Azad recalled fighting with the YPG alongside former members of the French Foreign Legion and the American military. There was also a man, the Texan said, who claimed to be Special Forces but was actually a child molester. There was a Canadian lingerie model, and a Muslim convert who liked to kiss dead Daesh on the lips.

“It's turned into a fan club,” Azad grumbled, explaining why he had crossed back into Iraq and joined the pesh. “A lot of people come over here thinking they’re going to be John Wayne and Rambo running and gunning. It’s not like that.”

Nicholas Barrett, a former combat medic and self-described “proud American infidel,” detailed a typical day in Kurdistan. “You’ll have these commanders from different tribes who hate each other, and they’re just klicks apart across no-man’s land. They’re both on the same radios that they bought at the same bazaar in Dohuk. They have their morning prayers, drink chai, talk about each other's mothers, and then lob mortars for a few hours.”

The men have to find their own entertainment. The morning I arrived at Mullah Abdullah, Christian Österman was cursing. A teenaged pesh soldier had stolen one of his boots as a prank. With virtually no translators available, communication between the volunteers and their hosts was mostly hand signals and a smattering of Kurdish Sorani. “I told this guy that ‘asshole’ is a sign of respect—like ‘sir,’” Smith said, waving at the boot thief. “Hi, asshole!”

The men kept busy building redoubts, scavenging firewood, spray-painting graffiti of Daesh soldiers copulating with goats, and caring for what remained of a litter of puppies birthed by a local stray. A rival bitch had been sneaking onto the base to kill the puppies one by one, and now there was only a single scrawny mutt left.

At night, you could tell exactly where ISIS was by the glow of their cooking fires in the distant town. The Westerners would wait until all the little lights were glowing before flashing the positions with a laser pointer. They would laugh hysterically as the jihadists, fearing snipers, frantically doused the flames. 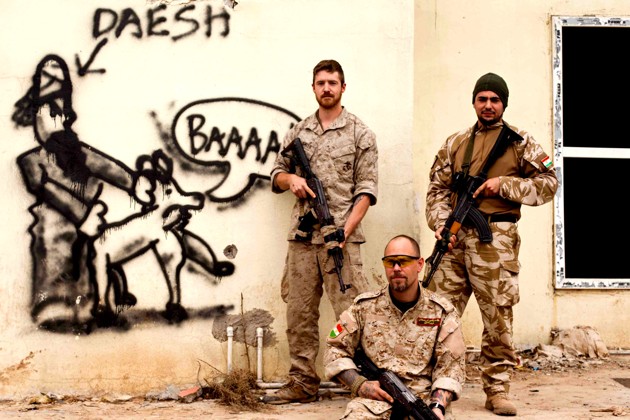 In the daylight, the town looked dead. There had been a black flag flying from a rooftop as recently as a week before, but it had vanished in a storm of French airstrikes. Today, the only sign of life came in the form of shrieking mortars, sent over at irregular intervals.

“You can tell generally where they’re going to land just by the sound,” Österman explained. The Swede had been in country for nearly five months. “When you hear that deep tone you know it's going to be pretty close.”

The men were so attuned to the signature trill that they sensed it through everything—conversation, engine noise, gunfire. By the time I heard it that morning, they were already on the ground waiting for the explosion. There was only silence. We raised our heads and looked around. It was a dud. The mortars are often bad and the ground is supple.

That evening, Smith and I hauled ourselves 100 feet up a radio tower to observe the enemy positions. The structure we climbed had been thoroughly scrapped of its most valuable metals by the pesh who had not been paid in four or five months. The men used to have a telescope, but the volunteer who brought it had taken it home with him to America. Now, we just peered through the jumpy optics of Smith’s AK at the floodplain stretching out before us, a still-life landscape of overgrown farms and ruined villages.

“If I was in charge,” the American reflected, “I'd bring in an EOD [Explosive Ordnance Disposal] team to clear a path and send everyone up in one straight line as fast as we could go. We’d take that spot beyond the river, and from there we’d be golden. I’d set up a .50 cal right in this tower, because from here we could hit everything. Unfortunately, we only have about 100 rounds in the truck. We just don't have the resources.”

As we prepared to climb down, Smith stood, chambered a round, and fired his AK into the vastness. The Westerners all had to buy their own bullets from the local arms market, and that shot had cost the American one dollar—about the same as a pack of Kurdish cigarettes.

When we hit the ground, the Frenchman Angelo Sammantano strode over. “That bitch ate the last puppy,” he reported, shaking his head.

Of all the men in that place, the American had loved those puppies the most. He had even made arrangements for an NGO to vaccinate one of them so he could bring the animal back to the States.

Smith patted his AK and glared at the contented killer lounging by the road. “We’re going on a walk tonight,” he swore.

On the Marine’s forearm was a tattoo of Atlas, straining to bear the impossible weight of a world engulfed in flames.

“Is that you?” I asked, pointing to the Titan.

NEXT STORY: Want Peace in Syria? Put Women at the Negotiating Table