Next Generation Interceptor: The Nation’s Next First Line of Defense Against Ballistic Missile Threats
Skip to Content
Get all our news and commentary in your inbox at 6 a.m. ET.
Threats
Global Carbon Emissions Rose in 2018 — A Lot

Three studies show the world is losing the fight to reduce greenhouse gases by 2030.

While it’s true that renewable energy is now cheaper than fossil fuels in some parts of the world, it’s also clear that this hasn’t happened at the scale needed. As a result, 2018 will see global carbon emissions rise by at least 1.8%, and potentially by as much as 3.7%. That’s because the growth in energy demand outpaced the growth in clean-energy supply, forcing the world to use more fossil fuels instead.

“The growth in global CO2 emissions puts the goals set out in the Paris agreement in jeopardy,” write a group of researchers from around the world who published three separate studies accounting this year’s emissions in the journals Nature, Environmental Research Letters, and Earth System Science Data.

The increase’s main culprits are growing use of coal in China and India, as well as oil and gas use in most of the world. Notably, the rich world, which has in recent years seen a decrease in emissions, recorded a small jump this year instead, according to a separate study by the International Energy Agency. 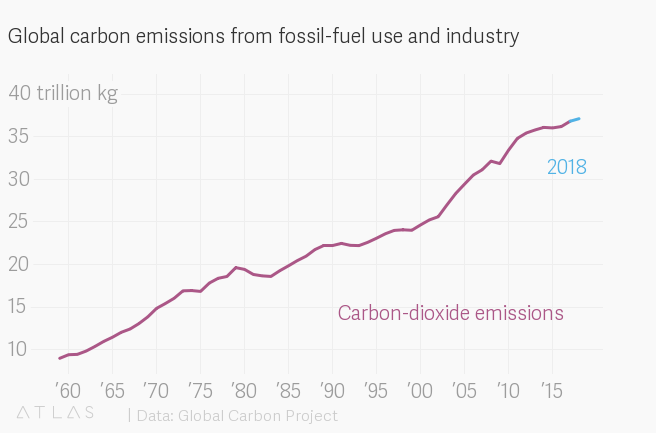 Although the difference between the two goals doesn’t seem substantial, the reduction in damages wrought by climate change in a 1.5°C world vs a 2°C world is huge. In financial terms, the planet would save $30 trillion in global economic growth by achieving the more ambitious target.

While meeting either goal seems increasingly challenging, there are some positives. “We are at the beginning of new exponential curves on renewable energy, electric vehicles, and green finance, so while progress seems slow now, it is on track to deliver a very different decade and century ahead,” notes the report.

As policymakers meet in Katowice, Poland at the UN climate-change summit, the authors also shared this message: “Our task now is to ensure the exponential curve of solutions outpaces that of climate impacts, and drives net emissions to zero by 2050. It’s necessary, desirable, and achievable.”