Inside the Disaster Zone
Skip to Content
What you need to know about the defense industry - in your inbox.
Business
How US Military Structure Overcomes the Gender Pay Gap

While sexual harassment remains an issue, military pay is non-negotiable and all troops must 'lean-in'.

On Dec. 3, US Defense Secretary Ashton Carter announced his intention to open up all military occupations to women. The military isn’t typically thought of as leading the charge for women’s equality, but in at least one way it is. There is no pay gender gap, even if there are fewer women: at every rank, men and women are paid equally.

The military is notorious for sexual harassment. But what makes the military workplace different—for better or worse–is that its structure inherently overcomes the many sources of the pay gap. Here are some of the reasons why:

There’s no room for negotiation. Women often don’t demand to be paid what they’re worth. And when they do, it’s poorly received. Since military pay is pre-determined, there’s no scope for men to ask for, and receive, more.

Everyone must lean-in. Women are often paid less because they value flexibility more, especially once they have children. They are willing to take a less high-powered career path and choose less lucrative occupations because it means they can be there for their children. Flexibility explains the pay gap between male and female OB-GYNs: Male doctors get paid 15% more than women, despite the fact there are more women in the field and patients often prefer female doctors. But studies show the pay gap is due to the fact that male doctors are willing to work more obscure hours, deliver babies in the middle of the night and weekends. There is no room for flexibility in the military—either you’re all in, go where you are told, and sometimes put yourself in grave danger—or you leave. Soldiers and sailors, of both genders, sometimes spend months away from their kids.

But complete equality in the military presumes women are promoted at the same rate as men. That makes Secretary Carter’s announcement significant. Serving in combat offers women more avenues to more forward.

Right now women aren’t promoted at the same rate men are. A significant female presence has already been growing in the military ever since 1993, when Congress made it possible for women serve on ships and squadrons and opened up more paths to promotion. The figure below is the share of women in the military, by rank, in 1998 and 2015: 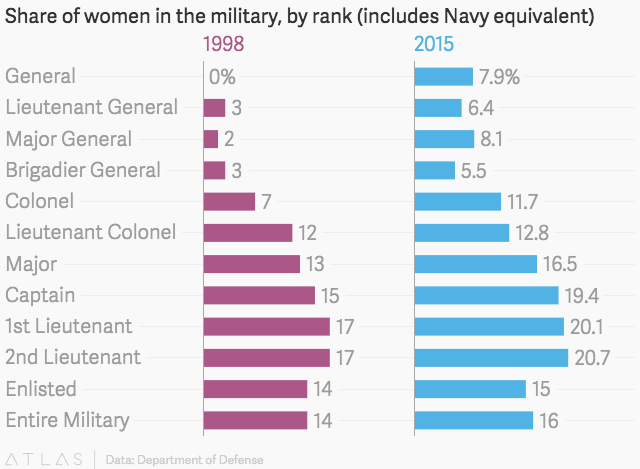 But women aren’t moving up the way men are. In 1998 about 17% of lieutenants, the entry point for officers, were women. If women rose through the ranks at an equal pace to men, more would be at least lieutenant colonels by now. A study from the RAND Corporation estimates that women are less likely to be promoted than men at most levels. About 45% of white men become majors in their careers, but only about 31% of white women do. It does not necessarily mean women are being passed over. The RAND study also found women are also more likely to leave the military. Their high rates of attrition could reflect discrimination or any number of professional and personal reasons. The lack of flexibility may be part of why the military achieves equal pay, but it also probably leads to higher rates of female attrition.

The military is trying to accommodate women with families. The Coast Guard offers two year sabbaticals in an effort to encourage young mothers to stay in. The Navy recently extended the length of its maternity leave to 18 weeks, more generous than many private sector jobs. But the nature of the work often means long deployments away from home, and there is not good way around that.

It is striking that the differences in promotion rates between men and women in the military are fairly modest, only a couple of percentage points. What’s happening at the top is also remarkable. The RAND study suggests once women in the military break through the glass ceiling, they are promoted at a faster rate. It is worth noting that in 1998 there was not a single woman general; now there are 38, which is 7.8% of all generals. Among Fortune 500 companies, only 5.2% have women CEOs, suggesting that even if women aren’t moving up the ranks of the military as fast as men, it may still be better than the private sector.

Retired Vice Admiral Sally Brice-O’Hara rose through the ranks in her 37-year-career in the Coast Guard. Unlike the rest of the military, all positions in the Coast Guard have been open to women since 1978. She observed more women dropping out, and says it was due to a number of reasons. The most cited was family concerns, but people often leave because they want more control of their lives and hate the frequent moving.

She admits when it comes to women, the Coast Guard isn’t perfect though. “I’ve encountered plenty of men who were not ready [to work with and see women as leaders]. I learned from it and was able to shake it off. Some peers had worse experiences and couldn’t shake it off.”

NEXT STORY: Putting Civilians in US Troop Support Jobs Could Save Billions, Report Says