What’s in the Iran deal; U.S. to train Ukrainian army?; JIEDDO’s new name; Mil suicides are down; And a bit more.

Historic Iran deal reached. After nearly a decade of fits and starts capped by 20 months of negotiations and another two weeks of extensions, Western and Iranian diplomats have at last arrived at a “Joint Comprehensive Plan of Action” to curb Tehran’s nuclear program, AP’s George Jahn and Matt Lee report this morning from Vienna.
What Iran conceded: An arms embargo on Iran—which Western diplomats feared, if lifted, would have exacerbated tensions in Syria, Yemen and Lebanon—remains in place for up to five years, though a clean bill of health from nuclear inspectors could shorten that; a UN embargo on the sale of ballistic missile technology to Tehran also remains in place, for up to eight years.
“Another significant agreement will allow U.N. inspectors to press for visits to Iranian military sites as part of their monitoring duties,” AP reports. “However, access isn’t guaranteed and could be delayed” as “Tehran would have the right to challenge the U.N. request and an arbitration board composed of Iran and the six world powers would then decide on the issue.”
The document runs more than 80 pages, the New York Times’ David Sanger and Michael Gordon report, “outlining in painstaking detail how much nuclear fuel Iran can keep in the country for the next 15 years; what kind of research and development it can perform on centrifuges and other nuclear equipment; and the redesign of both a nuclear reactor and a deep-underground enrichment site that Israeli and American officials feared could be invulnerable to bombing.”
What the U.S. had to accept—and what Congress is most apt to grumble about during its 60-day review period: “an understanding that essentially left in place most of Iran’s infrastructure at the country’s main nuclear sites, though much of it would be disassembled and put in storage. Skeptical U.S. lawmakers “have already complained that the deal being discussed would only delay the day when Iran would have the ability to build an atomic weapon.”
And a final admin note: “The accord will be a political agreement, not a legally binding treaty,” Sanger and Gordon write, adding, “Mr. Obama’s chances of ultimately prevailing [in the face of skeptics in Congress] are considered high. Even if the accord is voted down by one or both houses, he could veto that action, and he is likely to have the votes he would need to prevail in an effort to override the veto…” Read the rest here.

Two U.S.-trained Iraqi army brigades are among the hodgepodge of Baghdad forces in the new offensive to push Islamic State militants out of the Anbar provincial capital of Ramadi, Military Times reported yesterday.
The graphics team at the NYTs updated their visualization of the fight against ISIS to reflect the new offensive.
The Pentagon unit born out of America’s IED nightmare in Iraq gets a new name: The Joint IED Defeat Organization is reinventing itself to tackle new and increasingly diversified threats and challenges. Defense One Global Business Reporter Marcus Weisgerber explains why JIEDDO is now JIDA and what’s next for the specialized cell, here.
A dismal tally in Iraq: Some 15,000 Iraqis were killed and another 30,000 wounded between the start of 2014, when ISIS ramped up their offensives, and April, the UN says in a new report. Another three million have been displaced during that period, nearly half of them children.
And ISIS has a chief singer-songwriter. Or they did, because he’s dead now. “Maher Meshaal, also known as Abu Hajar al-Hadrami, a Saudi National, was killed Saturday in airstrikes south of the city of Al Hasaka,” CBS News reported yesterday. “Meshaal is the author of jihadi hymns such as ‘Saleel al-Sawarem’ and ‘Halomoo Halomoo O’ lions of war,’ which are regularly played as background music in combat and execution videos released by ISIS.”

The U.S., which currently trains Ukrainian national guard troops, may start with Kiev’s broader army, Lt. Gen. Ben Hodges, commander of U.S. Army Europe, said yesterday. “The training plan is being reviewed now,” The Washington Post reports Hodges as saying. “I expect it will look similar to what we’re doing now: basic tactical tasks, a lot of emphasis on combat life-saving and how to survive and operate in a heavily contested electronic warfare environment.”
“About 305 U.S. troops are currently in western Ukraine conducting training for Ukraine’s Interior Ministry forces, called national guardsmen, who operate checkpoints and perform other military tasks but are not front-line combat troops,” AP reports.
“While Hodges thinks a renewed separatist offensive, backed by Russian troops and equipment, is unlikely, he hasn’t it ruled it out…Instead, Hodges said, [Russian President Vladimir] Putin is content with keeping Ukraine ‘bubbling’ in a state of constant unrest,” WaPo reported.

Wisconsin Gov. Scott Walker has entered the 2016 presidential race at last, but he’s struggled to close his national security gap. “To prosper, however, we need to live in a safe and stable world. That’s why I’m for true safety,” he said, using his preferred “safety” as stand-in for national security. “The commander-in-chief has a sacred duty to protect the American people.” But like the wide Republican field before him, Walker hasn’t yet elaborated how he would do that. Our Politics Reporter Molly O’Toole has the story.

What the fighter of the future will look like: The next 15 years will change troops’ gear in virtually every respect, from body armor to communications to robot interactions. Defense One’s Technology Editor Patrick Tucker looks at some of the most important ways, here.

Suddenly, everyone wants the NSA’s cyber defense technology: After the OPM hack, orders are rolling in from banks and agriculture companies alike for the spy agency’s newly available commercial products. NextGov’s Aliya Sternstein has the story.

What are the two existential threats to the U.S.? Nuclear war and climate change. “A newly released report on the issue of climate change begins with a warning that countries should view it as they once viewed the specter of nuclear war.” Quartz’ Gabriel Fisher has more, here.

On Thursday, July 16—join us for a discussion on the DOD Insider Threat Program. Technology Editor Patrick Tucker will sit down with Patricia Larsen, co-director of the National Insider Threat Task Force, and Mark Nehmer, deputy chief of implementation at the DOD Insider Threat Management and Analysis Center with the Defense Security Service. The event begins at 8 a.m. EDT, at the CEB Waterview Conference Center in Arlington, Va. Register for your spot here.

For a backgrounder on insider threats, grab a copy of our newest e-book that leaps headlong into the subject here.

Welcome to Tuesday’s edition of The D Brief, from Ben Watson and Brad Peniston. Want to share The D Brief with a friend? Find our subscribe link here. (And if you want to view today’s edition in your browser, you can do that here.) And please tell us what you like, don’t like, or want to drop on our radar right here at the-d-brief@defenseone.com.

Big day for equality in the U.S. military as Defense Secretary Ashton Carter announced yesterday a six-month review “aimed at formally ending one of the last gender- or sexuality-based barriers to military service,” AP’s Lita Baldor reported.
“The Defense Department’s current regulations regarding transgender service members are outdated and are causing uncertainty that distracts commanders from our core missions,” Carter said in a statement Monday. The Pentagon’s Acting Personnel Secretary, Brad Carson, will lead the study, which will include cost and uniform considerations—as well as any “insurmountable problems that could derail the plan,” Baldor wrote.
The number of transgender people in the military could be as many as 15,000, the NYT adds, noting many maintain a “precarious existence in the ranks.
“‘I don’t think it’s been as hard as some people thought it would be’ to allow gay men, lesbians and bisexuals to openly serve in the military,” a defense official said, “arguing that the gradual approach to lifting the ban eased the transition and led to the success with which it is viewed today.”

The Department of Veterans Affairs laid out an ominous series of workarounds to lawmakers yesterday for its $2.5 billion shortfall: Shut down hospitals, furlough workers and temporarily stop hiring new employees. Why the sudden loss of money? Among other reasons, “Deputy VA Secretary Sloan Gibson told Congress that VA health care sites experienced a 10.5 percent increase in workload for the one-year period since the [wait list] scandal erupted in April 2014.” AP has more, here.
Lots of military-related action on Capitol Hill this week, including the House Foreign Affairs Committee talking Iran at 10 a.m. EDT; and the Senate Armed Services Committee’s hearing for the nominations of Air Force Gen. Paul Selva as the new vice chairman of the Joint Chiefs of Staff, and Air Force Gen. Darren McDew for his nomination as the new head of U.S. Transportation Command. Catch the rest here, thanks to Military Times’ Leo Shane III.

What’s on the mind of CJCS nominee Gen. Joseph Dunford? Seabasing, for one thing. The Marine Corps commandant spoke last month about recent and upcoming experiments aimed at allowing Marines to strike from the sea with vastly more ease and lethality. Vice News’ Ryan Faith explains what’s the big deal, here.
Destroyer’s top enlisted sailor fired. From Navy Times, which far more often highlights the relief of commanding officers: “Command Master Chief (AW/SW) Ralph Crowder was relieved of his duties aboard the USS Pinckney ‘due to loss of confidence in his ability to fulfill his role and responsibilities,’ Naval Surface Force Pacific said in a news release Monday.” Staff report, here.

In the world of war tech—and a warning to take this with a grain of salt since it comes from an al-Jazeera interview with a Syrian pilot allegedly captured by Jabhat al-Nusra—Syrian troops are reportedly using iPad apps to drop barrel bombs, IHS Janes reports. “The captive pilot admitted that the Syrian regime allowed the use of barrels containing chlorine when bombing areas that are completely controlled by opposition groups… However, he added that some crews dropped chlorine bombs without knowing their contents.”
And for a good tech tale this morning, we have a hacker whose six hours of work led United Airlines to award him 1 million free air miles: he pinpointed a vulnerability that would have allowed an outsider to surreptitiously insert new code into the airline’s system. The site Naked Security has all the nerdy details right here. 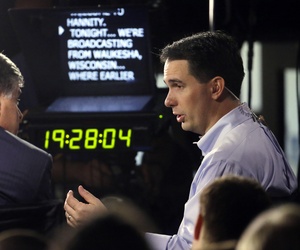 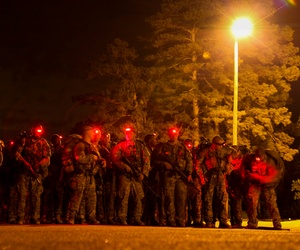 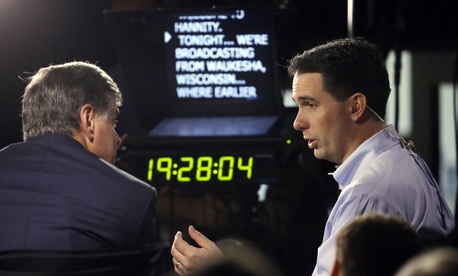 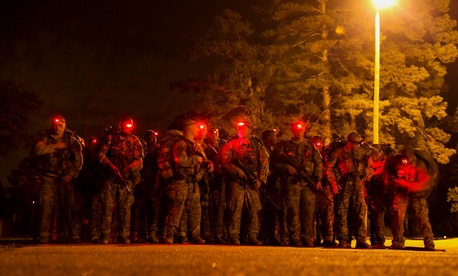