There was more panic in Paris this morning when a 7-hour police raid resulted in the deaths of two suspects, including a woman who detonated a vest of explosives, in the historic north Paris suburb of Saint-Denis. The target of the raid, a Belgian man named Abdelhamid Abaaoud, is said to have been the chief planner for the Paris attacks that killed nearly 130 on Friday night. His whereabouts are currently unknown.

“Phone taps and surveillance operations” led police to the apartment, which is near the soccer stadium attacked Friday night, Reuters reports, noting “investigators believe the St. Denis group had been planning an attack on the French capital’s La Defense business capital.”

“The raid came after footage from the scene of one of Paris attacks revealed a ninth suspect may have taken part,” Agence France-Presse reports. “Police also carried out multiple raids in southwest France. The operations were part of an anti-terrorism strategy but not directly linked to the Paris attacks,” an investigator said.

Police believed Abaaoud was with “five other heavily armed people as the raid started” at 4:20 a.m. local. Police entered the building only to be met with “unexpectedly violent resistance” that killed a police dog and injured three police and a pedestrian, the Associated Press reports.

One witness described the fighting as “continuous, it didn’t stop…from 4:20 until 5:30. It was a good hour. I couldn’t say how many shots were fired, but it was probably 500. Hundreds, definitely. There were maybe 10 explosions.”

Parisian SWAT teams eventually arrested seven people in the raid: three men holed up in the apartment and another four nearby, including a quite oblivious man who rented the besieged apartment to two strangers only just last week.

All 129 victims of Friday’s attacks have been ID’d. And AFP has created an interactive database of the “lives cut short,” here.

Meanwhile, France’s post-Paris airstrikes on ISIS have national-security observers wondering, as the New York Times writes: “Why, if there were confirmed Islamic State targets that could be hit without killing civilians, were they not hit more heavily long ago? And what, in fact, was being hit?” Read on, here.

Beijing must stop its land reclamation in the South China Sea, U.S. President Barack Obama said after a meeting Wednesday with Philippine President Benigno Aquino in Manila. The two leaders “discussed the impact of China’s land reclamation and construction activities on regional stability,” Obama said. “We agree on the need for bold steps to lower tensions, including pledging to halt further reclamation, new construction, and militarization of disputed areas in the South China Sea. As President Aquino indicated, disputes need to be resolved peacefully. That’s why the United States supports the Philippines’ decision to use arbitration under the U.N. Convention on the Law of the Sea to peacefully and lawfully address differences.”

Like the Group of 20 meeting this past weekend in Turkey, this year’s APEC gathering was supposed to focus on the economy, but “has been overshadowed by global security threats, chiefly the recent terrorist attacks in Paris and Egypt by Islamic State, and by the confrontation between the U.S. and China over the South China Sea,” the Wall Street Journal reports. China’s foreign ministry hit back at the U.S. for flagging the SCS disputes yet again, saying, “If there is something that should stop, that is that the United States should stop playing up the South China Sea issue, stop heightening the tension in the South China Sea and stop complicating the dispute in the South China Sea.” More here.

And in Manila, Obama said the divisive rhetoric from the GOP on Syrian refugees “needs to stop….We are not well-served when, in response to a terrorist attack, we descend into fear and panic. We don’t make good decisions if it’s based on hysteria or an exaggeration of risks.”

As the Associated Press writes, “Republicans in Congress and on the 2016 presidential trail have urged an immediate closure of America’s borders to Syrian refugees, but the Obama administration has shown no sign of backing off its plans to bring an additional 10,000 Syrians fleeing civil war into the U.S.”

Obama said “tough talkers” on the issue are guilty of hypocrisy. “These are the same folks oftentimes who suggest that they’re so tough that just talking to Putin, or staring down ISIL, or using some additional rhetoric somehow, is going to solve the problems out there. But apparently, they’re scared of widows and orphans coming into the United States of America as part of our tradition of compassion….They’ve been playing on fear in order to try to score political points or to advance their campaigns. And it’s irresponsible. And it’s contrary to who we are. And it needs to stop, because the world is watching.”

Count the U.N. among those who say halting the reception of Syrian refugees is a terrible idea, Vice News reports. “It’s not the refugee outflows that cause terrorism, it is terrorism, tyranny and war that create refugees,” said the U.N.’s High Commissioner for Refugees, Antonio Guterres, on Tuesday. That, here.

Even Lawfare’s Benjamin Wittes (“I do not hang out, intellectually or emotionally, in the human rights clubhouse”) has had enough. “But turning our backs on refugees? Count me the heck out,” he writes. Read that, here.

Back stateside, Senate Intel Chairman Richard Burr, R-N.C., said ISIS militants have a foothold in 30 countries, the WSJ reports. He also said U.S. officials believe it “likely that end-to-end encryption was used to communicate in Belgium and France and Syria” to plot the attacks in Paris on Friday.

A bit more on the “going dark” problem of encryption: Despite what intelligence officials say, limiting information security would do little to thwart terrorism, reports The Atlantic’s Kaveh Waddell, here.

Today in DC: Defense Secretary Ash Carter will roll out his long-awaited “Force of the Future” personnel-policy reforms, a swath of changes meant to entice those out of uniform to join up, those in uniform to stick around, and the military generally to make better use of everyone. Stay tuned for coverage at Defense One.

Brussels has become Europe’s jihadist capital of Europe. In the last few years, one particular suburb has been at the heart of a thriving black market where military weapons can be bought in record time. Quartz’s Aamna Mohdin reports, here.

Do the Democrats have a strategy against ISIS? If so, it’s time to lay it out, says The Atlantic’s Peter Beinert: “In the next presidential debates, Democrats should try laying out a plan to defeat the terrorist group instead of changing the subject or issuing vague platitudes.” Read that, here.

It’s time for a frank talk with Pakistan’s army chief. The White House will devote substantial attention to Gen. Raheel Sharif when he arrives in Washington this hectic week. This will prove a wise use of precious time and energy — if Obama administration officials seize the opportunity. Daniel Markey of SAIS makes the argument, here.

Brain implants to boost memory and heal PTSD. “If work being backed by DARPA goes according to plan, we one day will be able to implant chips into our brains that will make sure we never forget anything,” reports Quartz’s Mike Murphy, here.

Don’t miss this Dec. 7 event: Defense One Leadership Briefing with Jeh Johnson: Is an ISIS attack on Washington next? How prepared is the U.S. to prevent, defend and respond to it? Department of Homeland Security Secretary Jeh Johnson sits for an intimate conversation with Defense One, on Monday, Dec. 7, to discuss how threats are transitioning from the battlefield to the homefront, and how DHS is working with the military, Defense Department, intelligence community, and other agencies for a whole-of-government defense against terrorism, cyber attacks, and more. Defense One Executive Editor Kevin Baron moderates the event, 8 a.m. EDT at Washington’s District Architecture Center. Register for your spot here.

Welcome to the Wednesday edition of The D Brief, from Ben Watson and Bradley Peniston. Tell your friends to subscribe here: http://get.defenseone.com/d-brief/. Want to see something different? Got news? Let us know: the-d-brief@defenseone.com.

In the wake of the Paris attacks, expect a battle of national security speeches. Tonight at The Citadel in South Carolina, former Florida Gov. Jeb Bush will try to revitalize a languishing campaign with a speech that was originally focused on rebuilding the military, but now — campaign officials said — will be more broadly on his strategy for taking on ISIS and (cue buzzphrase!) “radical Islamic terrorism.” But former Secretary of State Hillary Clinton announced that she too will be making her big national security speech this week, on Thursday at 92nd St. Y in New York. Campaign officials said she would outline her strategy for defeating ISIS, as well as her plan for combating radical jihadism more broadly.

Former Defense Secretary Leon Panetta’s son, Jimmy, is entering the political fray. “With the historic Custom House and the Monterey Bay serving as a backdrop, Monterey County Deputy District Attorney Jimmy Panetta announced his campaign for Congress on Tuesday morning,” the Santa Cruz Sentinel reports. “Panetta, 45, was joined by his wife, parents and in-laws as he announced he is running for the 20th Congressional District seat being vacated by Rep. Sam Farr, D-Carmel, in January 2017.”

Panetta played up the U.S. military’s presence in the area, “saying decisions will have to be made to ensure the Naval Postgraduate School, the Defense Language Institute and Fort Hunter Liggett survive another round of base closures. Because the military has a presence on the Central Coast and may be of interest to our enemies, Panetta said, “we should always be diligent. For now it is embodied by what happened in Paris.”

He also used his time to speak up about the counter-ISIS fight, saying, “We have to be careful with boots on the ground. We must find, fix and eradicate high threats. We’ve done it in Afghanistan, Pakistan and Iraq…I support using our intelligence. We need to confront them where they are now. It’s important to confront ISIS, but it can be done without boots on the ground.” That story, here.

Lastly today—the Islamic State has taken a tech-y turn toward the bureaucratic with a 24-hour help desk “to help its foot soldiers spread its message worldwide, recruit followers and launch more attacks on foreign soil,” NBC News reports. “The relatively new development — which law enforcement and intel officials say has ramped up over the past year — is alarming because it allows potentially thousands of ISIS followers to move about and plan operations without any hint of activity showing up in their massive collection of signals intelligence.”

The desk jockeys reportedly keep tabs on everything from the latest in encryption to enforcing OPSEC, and they “produce materials to train others in how to use them. The [the Combating Terrorism Center, an independent research organization at the U.S. Military Academy at West Point] has obtained more than 300 pages of documents showing the help desk is training everyone from novice militants to the most experienced jihadists in digital operational security.” More, here. 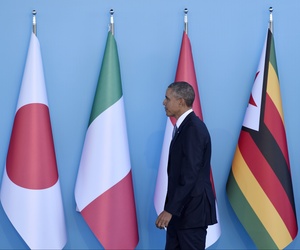 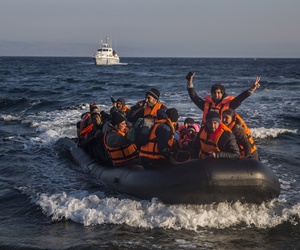 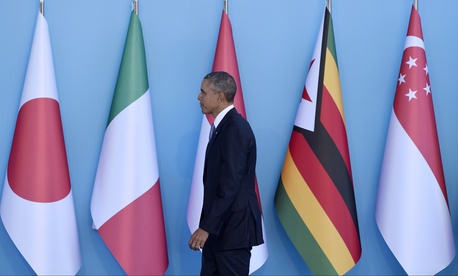 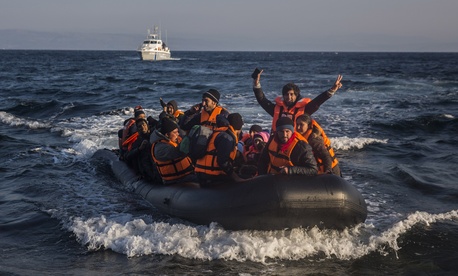