Ash Carter heads to Europe, seeking help in Paris, Davos. The U.S. defense secretary will meet counter-ISIS allies in France, then join Joe Biden, John Kerry, and Bono at Switzerland’s swanky — and controversial — World Economic Forum. His purpose: to take stock of the fight, describe the U.S. plan, and devise ways to get more help from more countries, reports Defense One’s Kevin Baron, who is traveling with Carter. “There’s a feeling that there’s momentum on the ground…and we want to build commensurate momentum diplomatically,” a senior U.S. official told reporters Friday. Read Baron’s dispatch, here, and watch this week for more dispatches from Carter’s European swing.

The meeting in France will build on a bilateral counterterrorism relationship that deepened after the Paris attacks in November, reports the Washington Post: “U.S. and French officials in Washington formed what they call the Lafayette Group: A joint team that reviews how the two countries share intelligence, and how that effort can be improved…The team, which has met twice so far, gives the French a way to make Carter aware of problems quickly, said a senior U.S. defense official, speaking on condition of anonymity to discuss policy issues.” Read that, here.

After this weekend’s historic prisoner swap with Iran, the next big hurdle for the Obama administration’s final stretch in office—finding some resolution to the conflict in Syria—is almost certainly a bridge too far, writes the Wall Street Journal. Why? Unsurprisingly, “Political pressure at home and concerns from U.S. allies in the region.”

Indeed, UN officials fear the Jan. 25 date for restarting Syrian peace talks may be pushed to the right. That’s because the 17 nations backing the agreement “have yet to decide which of the many opposition groups fighting in Syria will have representatives at the negotiating table,” reports Voice of America.

And here’s the BBC with a brief backgrounder on the new sanctions the White House imposed on Iran over its ballistic missile program immediately after the nuclear deal took effect this weekend.

So who were the Iranians the U.S. released in exchange for the five Americans held? “One was an aerospace expert convicted of helping Iran launch its first satellite into space. Another was a maritime engineer found guilty of providing navigation technology to the Iranians. And three men had ties to a company accused of illegally exporting millions of dollars in American technology with military applications to Iran,” writes the New York Times.

For what it’s worth: “In remarks at the White House on Sunday, Mr. Obama stressed that the seven men had not been charged with terrorism or other violent crimes, and he called their release a ‘one-time gesture to Iran given the unique opportunity offered by this moment and the larger circumstances at play.’” More on that delicate but hardly futile diplomatic front, here.

Gunmen reportedly kidnapped three Iraq-born U.S. contractors from an apartment awfully close to a Baghdad brothel this weekend, the Washington Post reports. “The three Americans appear to have been seized by Shiite militiamen in the Dora neighborhood in southern Baghdad, the police colonel said. The area from which they were taken is controlled by Shiite militias, including Iran-backed Asaib Ahl al-Haq, or League of the Righteous, he said.”

According to the Iraqi colonel, “the group had been invited to the home of their Iraqi interpreter. But a resident of the apartment building where the Americans were reportedly seized said they were taken from a second-story apartment that he described as a well-known brothel. The police major general also said the apartment was a brothel. The resident said the apartment is subject to frequent raids by Asaib Ahl ­al-Haq, although typically the men found inside are simply told to leave. He said that he witnessed part of the raid but that it happened late at night and was over quickly. The Baghdad Operations Command described the apartment as ‘suspicious’ in its statement.” Read the rest, here.

Close to 19,000 Iraqis were killed between Jan. 2014 and Oct. 2015, the UN says in a new report. “The numbers are mind-boggling,” CNN notes. “In the 21-month period: At least 18,802 civilians were killed, about half of them in Baghdad alone; another 36,245 were wounded; about 3.2 million people were internally displaced, including a million school-aged children.”

And in Syria, three days of fighting between the Islamic State and Syrian army troops have left nearly 200 dead in the country’s east, “near the city of Deir al-Zor after attacking the towns of Ayyash and Begayliya,” Reuters reports. The Syrian Observatory for Human Rights also claims ISIS captured 400 civilians during a Saturday assault in Ayyash. More on all that, here.

“Defeating ISIS will take decades,” writes WaPo’s David Ignatius in this warning about the “ugly truth” of the U.S. and the West’s struggle against the group. His rather disturbing bottom line: “The next president is going to inherit an expanding war against a global terrorist adversary. The debate about how best to fight this enemy hasn’t even begun.” More here.

The U.S. thinks China may have stolen military robot designs. U.S. officials have ordered an investigation into whether China might be gaining an unfair competitive advantage in the robotics race. NextGov, here.

Obama is about to launch a new nuclear arms race. Despite his anti-nuclear words, the president is about to cave to the nuclear arms priesthood. there’s a better way, argue Gordon Adams and Richard Sokolsky, here.

Al-Qaeda is still exploiting weak governments in West Africa. The group has targeted Algeria, Niger, Mali and now Burkina Faso—killing people and carrying out kidnappings for ransom, all to stop what they perceive as the corrupt influence of the West. Quartz, here.

In Pakistan, the Taliban claim one of their suicide bombers was behind this morning’s attack at a crowded police checkpoint outside Peshawar that killed nearly a dozen and wounded 21 others, the Associated Press reports.

The specs: “The A-29 features two internally mounted .50 cal machine guns (one in each wing), and has five hardpoints under the wing and a fuselage that can carry up to 1,500 kg of additional weapons. These can include .50 cal or 20 mm gun pods, rocket pods, short-range air-air missiles of the AIM-9X class, and conventional or smart freefall bombs. The aircraft’s inboard stations, as well as its ventral one, are also ‘wet’-configured for underwing fuel tanks.”

U.S. Central Command laid out a timeline of what happened last Tuesday before 10 U.S. sailors were taken into Iranian custody near Farsi Island in the Arabian Gulf.

Answered: what some of the contributing factors were. Those included “poor navigation, failed communications equipment and a stalled engine,” writes the Wall Street Journal’s Gordon Lubold.

Not answered: “why the sailors were detained after what appears to have been a legal transiting of Iran’s territorial waters,” writes Lubold.

Oh by the way: Iran seized SIM cards from two of the sailor’s sat phones, the L.A. Times adds.

After three months of delay, Sen. John McCain is finally cool with Obama’s pick for new Army Secretary, Eric Fanning, reports the Huffington Post. McCain had held up the post on fears Fanning’s interim appointment as acting secretary violated federal law—a gripe that compelled Fanning to step down from the acting job to prepare for his confirmation hearing. “Fanning will appear before the Senate Armed Services Committee, which McCain chairs, on Thursday. If confirmed by the full Senate, he will make history as the first openly gay person to fill the post.” More here.

And speaking of Washington, there are numerous “key cybersecurity recommendations still pending for [the] nation’s capital,” writes Chris Castelli for Inside Cybersecurity. “These recommendations aren’t rocket science,” said one security analyst. “They are the nuts and bolts of a basic cybersecurity program which any large organization should embrace. Corporate CEOs and heads of federal departments have been fired for doing far less.”

Lastly today—will the former CIA director once referred to as “P4” be knocked down a star? The Daily Beast reports that retired Gen. David Petreaus could be the face of the Pentagon’s effort to clamp down on misbehaving generals.

Why now? Defense Secretary “Carter is said to be concerned that because he has recommended other generals be reduced in rank for actions not becoming an officer, he’ll be seen as inconsistent if he doesn’t do the same for Petraeus. The decision is as much about timing and politics as it is Petraeus’s own transgressions.”

A word on precedent: “The U.S. military has, on several occasions, demoted generals, increasingly for improper personal contact and not for poor battlefield decisions. But rarely does it demote four-star generals, in part because there are so few of them.” Read the rest, here. 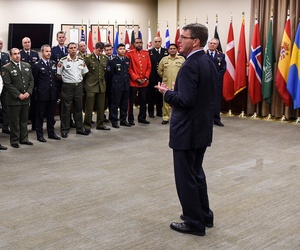 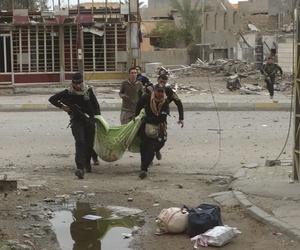 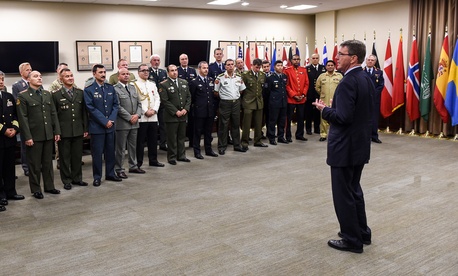 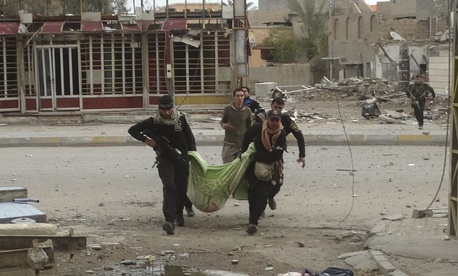