The U.S. is tripling the number of its troops operating inside Syria from 50 to 300, which—when you tack on the 217 the U.S. added last Monday—add up to nearly 500 new troops for President Barack Obama’s counter-Islamic State fight in a week. And most of them are special operations forces, The Wall Street Journal reported Sunday.

Said Obama of the new troops: “They’re not going to be leading the fight on the ground, but they will be essential in providing the training and assisting local forces,” he said this morning in Germany after a weeklong trip that took him to Saudi Arabia and the U.K.

Sitrep on Syria: “U.S.-backed forces in Syria, led by Kurdish units, have taken back about 16% of the territory which Islamic State seized in Syria,” U.S. officials told WSJ.

Room for improvement: “Some 60% of the local forces which retook [the northeastern Syrian town of] Shaddadi [in early March] were Kurdish, while Sunni Arab units made up about 40%, according to U.S. officials. But the officials said the Kurds did most of the fighting, underlining the need to bolster Arab contingents before the U.S.-led coalition moves on Raqqa.”

Obama on America’s allies “across the pond”—“Europe and NATO can still do more,” he said this morning in advance of a meeting later “with the leaders of Great Britain, Germany, France and Italy to ask those nations to step up their contributions to the air campaign against IS and to training local forces,” in addition to developing some sort of next steps for Libya, the Associated Press reports. He also pushed for Europe to stick together in the face of the compounding economic and migration crises that test the continent’s unity. More here.

In Syria this morning, a car bomb detonated near an army checkpoint in southern Damascus, killing at least a half dozen people, Reuters reports.

To the north in Aleppo, at least 60 people have been killed in the past three days from government airstrikes. That, here.

The Saudi-led coalition says it killed 800 al-Qaeda fighters from its Yemeni branch’s “main stronghold” in the south-central coastal city of Al Mukalla, where al-Qaeda in the Arabian Peninsula had “established [an] unprecedented level of governance” after more than a year of holding the city and gaining the acquiescence of the locals. The offensive on Mukalla began early Sunday with a hail of airstrikes as Saudi and Emirati special forces, along with supporters of President Abd-Rabbu Mansour Hadi, advanced into Mukalla. “Yemeni and U.A.E. troops advanced to the outskirts of the city of some 300,000 Sunday before mediation by Islamic clerics led to a withdrawal by AQAP fighters who fled westward,” the WSJ reported.

Gloating. “A coalition-allied commander in Al Mukalla told Saudi-owned Al Arabiya television later Sunday that the forces ‘made progress in record time’ against AQAP, considered one of al Qaeda’s most dangerous branches. The commander, Maj. Awad Salmeen, said the forces had taken over the local airport and an oil terminal, and that the city’s seaport was close to being under control.”

Let’s do the numbers: “The United Nations estimates that more than 6,200 people have died as a result of the conflict. Millions more have been forced to move from their homes, and the U.N. considers much of the country to be on the brink of famine,” WSJ adds.

Homeland, ISIS, and security Abroad. European and U.S. counterterrorism officials said they are just beginning to get a better handle on what turns a citizen into a terrorist, but are convinced they’re making (various levels of) progress against the Islamic State’s ground forces in Iraq and Syria, spreading ideology, and financial networks. But there’s much work to be done. Bottom line: there will be more attacks on Western cities before this thing is over many years from now. White House counterterrorism chief Lisa Monaco and 10 Downing Street counterparty, Deputy National Security Advisor Paddy McGuinness spoke with Defense One’s Kevin Baron Saturday at the new Aspen Security Forum: Global, in London.

Baron also is tracking President Obama’s Eurotrip. Look for more to come on the state of the ISIS war on the homefront, later this week.

Want more F-22s? Here’s what that would take. Congress is inquiring about restarting the Raptor production line, cold for almost five years now. That would be even more complicated than you probably thought. Global Business Editor Marcus Weisgerber reports, here.

Meet the small Iraqi town that breeds jihadis. No matter where you turn when covering the Islamic State’s two years of terror in Iraq and Syria, one name repeatedly crops up: Tal Afar. The Atlantic explains why, here.

U.S. spies want a laser gun that can detect bombs from 100 feet away. If the device can be produced and later miniaturized, it may end up resembling a gun…or perhaps just a grocery-store scanner. From NextGov, here.

Welcome to the Monday edition of The D Brief, by Ben Watson and Bradley Peniston. On this day in 1915, British and allied troops invaded the Gallipoli peninsula. Rattle your friends with this link: http://get.defenseone.com/d-brief/. And let us know your news: the-d-brief@defenseone.com.

Four-fifths of the U.S. senate tells Obama not to shortchange Israel. 83 of 100 U.S. senators “have signed a letter urging President Barack Obama to quickly reach an agreement on a new defense aid package for Israel worth more than the current $3 billion per year,” Reuters reports this morning.

However, the letter, whose lead signatories are Republican Lindsey Graham and Democrat Chris Coons, does not “provide a figure for the suggested aid. Israel wants $4 billion to $4.5 billion in aid in a new agreement to replace the current memorandum of understanding, or MOU, which expires in 2018. U.S. officials have given lower target figures of about $3.7 billion. They hope for a new agreement before Obama leaves office in January.” More here.

Where Ukraine and Trump intersect. You may have noticed word of Republican 2016 front-runner Donald Trump’s new, more calm turn on the campaign trail. It’s a deliberate shift from his abrasive, shoot-first mentality of the past nearly year on the stump. But his new look comes from a man the Financial Times says honed his “dark” arts supporting Ukraine’s ousted former Prime Minister Viktor Yanukovich. As you might imagine, the accused, Paul Manafort, didn’t take kindly to FT poking around on his Yanukovich work. “Asked by the Financial Times at Mr Trump’s victory party whether he thought his work in Ukraine would compromise him in any way, Mr Manafort batted away the suggestion. ‘No, I don’t. I helped bring Ukraine into Europe,’ he reiterated. In interviews, half a dozen former associates of Mr Manafort in Ukraine provided a more nuanced picture of his work there.” Find that, here.

North Korea launched another rocket on Saturday, this one from a submarine off its east coast. And it appears to have traveled about 30 kms before plummeting back to earth—which is well short of the range for submarine-launched ballistic missiles of the type Pyongyang claims to have fired, South Korea’s military chief said. As before, the North said these launches will continue as long as the U.S. and South Korea keep up their joint military exercises. And as before, that’s a condition the U.S. is not interested in. The North “will have to do better than that,” Obama said on Sunday.

(Reminder: here’s why we should expect more such flights through May.)

ICYMI: A-10s are headed to the South China Sea, which turns the airframe best known for close-air support to ground troops into a maritime patrol plane, War Is Boring’s David Axe reported. “[T]he Pentagon has sent four A-10s and their crews and maintainers to fly sea patrols west of The Philippines, in a mineral-rich region of the South China Seas that Manila and Beijing both claim,” Axe writes, adding: “[I]t’s also possible the A-10s’ Luzon deployment is part of a sales pitch. Boeing, which maintains the Warthogs, wants to sell any A-10s that the Air Force prematurely retires. And coincidentally, or not, Philippine airmen have expressed interest in acquiring them.” That, here.

The world’s first drone aircraft carrier is coming. That’s the word after the U.S. Navy announced it had “installed the first command center for unmanned aerial vehicles” aboard the USS Carl Vinson, UPI reported on Thursday. The move supports the Navy’s MQ-XX program, whic seeks “to deliver a high-endurance unmanned aircraft that will replace today’s F/A-18E/F aircraft in the role as the aerial tanker for the Navy’s carrier air wing, and will preserve the strike fighter’s flight hours for its primary mission. The Navy said it will also leverage the range and payload capacity of high-endurance unmanned aircraft to provide critically needed, persistent, sea-based ISR capability in support.” Read the rest, here.

There was a world speed record for “magnetic levitation” and the U.S. Air Force just broke it (twice). On March 2, airmen from the 846th Test Squadron at Holloman’s Air Force Base in New Mexico sent “a 2,000-pound, magnetically levitated, rocket-powered sled down a nearly frictionless track at 513 mph,” breaking the previous record. “But that record only stood for two days, when the 846th set a new one at an incredible 633 mph.”

How fast was that? The sled covered about seven football fields in two seconds. More here.

In the video, a woman “strides nonchalantly across a field as mines explode all around her, emerging unscathed from balls of flame, smiling as she removes the suit’s facemask,” TDB writes. “Russian deputy prime minister Dmitry Rogozon, he called the Terminator ‘a sad excuse’ when compared to the ‘girl testers of the military industrial complex of Russia,’ adding rather ominously, ‘if we have that kind of girl, imagine what the guys are like.’” All that, here. 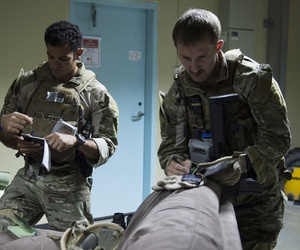 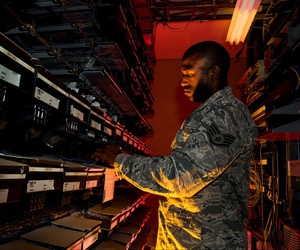 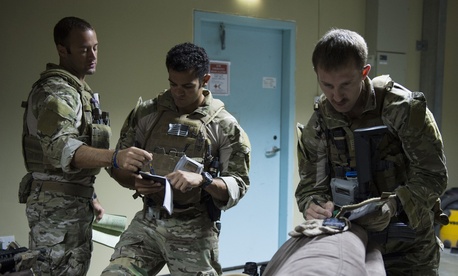 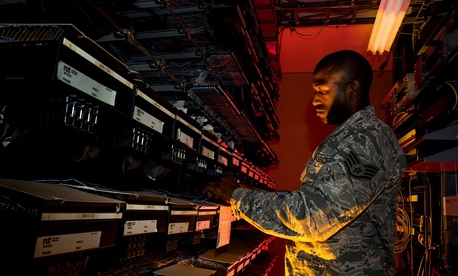