Iraq on the brink; US pounds away at ISIS in Syria; India, US talk anti-sub warfare; The futuristic aircraft that may replace the Black Hawk; and a bit more.

Iraq is on the brink of political catastrophe as three bombs detonated in Baghdad this morning, killing at least 13 and deepening the fraught situation in the Iraqi capital over the weekend. “The largest blast, which Islamic State said it was behind, came from a parked car bomb in the Saydiya district of southern Baghdad that killed 11 and wounded 30,” Reuters reports. And to the north: “Explosives planted on the ground in Tarmiya, 25 km (15 miles) north of Baghdad, killed two and wounded six, while a roadside bomb in Khalisa, a town 30 km (20 miles) south of the city, left one dead and two wounded.”

Over the weekend, protesters overran parts of Baghdad’s Green Zone “for the first time since it was established in 2003,” sending hundreds of supporters of cleric Muqtada al-Sadr to ransack Iraq’s Parliament, demanding an end to corruption, the Soufan Group and Washington Post report.

The protests receded on Sunday after Sadr “directed his followers to leave the Green Zone in an orderly fashion, to chant for Iraq and not a sect, and to help clean the space they had occupied,” The New York Times reports.

The struggle ahead: “The pullback by Sadr gives Iraq’s embattled prime minister, Haider al-Abadi, some breathing space, but the task ahead of him is a thorny one. The cleric has called for an end to the quota system that apportions Iraq’s cabinet positions along sectarian lines and is demanding a technocratic government. But such changes would probably be obstructed at every turn by those who think they would lose power,” the Post writes.

Before departing the Green Zone, protesters presented a list of demands: “Create a technocratic government or they will demand the ouster of the prime minister, the president and the speaker. If that doesn’t happen, they will demand early elections, and if all else fails, they will storm the headquarters of political leaders.”

The reality: “Can he achieve a reshuffle? The answer is no,” said Kirk Sowell, an analyst based in Amman, Jordan. “Sadr knows that. It’s all a game.”

Is Sadr good for Iraq? ask the folks at War on the Rocks. At a minimum, he’s “become a counter-balancing force to provide checks and balances against powerful elites, such as Maliki, who have been ruling undemocratically and unconstitutionally for many years.” Worth the click, here.

It was only a matter of time before ordinary Iraqis stormed the walled-in palaces of their corrupt politicians, Middle East expert Emma Sky writes in Politico. Her warning: “Under the right circumstances, Iraqi forces, with U.S. support, can smash the Islamic State. But Washington should not kid itself: If the root causes that created the conditions for the rise of the Islamic State are not addressed, then some son-of-ISIS might emerge in the future—and the cycle will continue.” More here.

Need some background and history on the Baghdad political crisis? The Institute for the Study of War has you covered, here.

America is in a “desperate bid” to save peace in Syria as State Secretary John Kerry begins his second day of Geneva talks focused on the cluttered Syrian battlefield. “Kerry’s meetings in Geneva came as Syria’s state news agency said the military has extended its cease-fire around Damascus and opposition strongholds in the eastern suburbs for another 48 hours,” AP reports. “It said the cessation of hostilities that was declared Friday around the capital and the coastal Latakia region, following two weeks of escalating violence around the country.”

But that sort-of ceasefire does not include Aleppo, where fighting has killed more than 250 in the past week and where the U.S. is now mulling a “safe zone” map of the city co-authored with Moscow. One U.S. official told AP that under such a scenario, “‘hard lines’ would delineate specific areas and neighborhoods.”

Critical caveat: “It was not immediately clear whether Russia would accept such a plan or if Moscow could persuade the Assad government to respect the prospective zones. Some U.S. officials are skeptical of the chances for success, but also note that it is worth a try to at least reduce the violence.” More here.

On the bright side, there has been a lull in fighting in Aleppo over the weekend, AFP reports this morning.

Elsewhere in Syria, the U.S. and Turkish militaries are going to town on ISIS near the Syrian-Turkish border, using artillery and drones to kill more than 60 fighters, Turkish state-run new said this morning. “The offensive started on Sunday when four rockets fired from Syria hit the Turkish border town of Kilis and wounded eight people,” AP reports. “Four drones deployed from the Incirlik air base, a launching point for U.S.-led coalition forces in southern Turkey, took part in the operation and killed 29 militants…The remaining 34 IS fighters were ‘neutralized’ by rocket fire and artillery shelling from Turkey, according to Anadolu Agency.” That, here.

Groundhog Day continues some 2,000 miles south in Yemen, where “the country’s government delegation has suspended its participation in peace talks.” More, here.

Apropos of nothing, The Terminator dropped by Kuwait to visit U.S. troops while Arnold Schwarzenegger and his production team work out a documentary about climate change. Stars and Stripes has that one, here.

The futuristic aircraft that may replace the Black Hawk will fly next year. But don’t expect the Bell V-280 or Sikorsky-Boeing SB-1 to hit battlefields until after 2030 — unless their builders find other customers first. Global Business Editor Marcus Weisgerber reports, here.

U.S. blames bad gear for hospital strike. but there’s more to the story. The redacted investigation report reveals that the AC-130U crew got disoriented, ignored rules of engagement, and didn’t listen to a warning. Tech Editor Patrick Tucker has the story, here.

Leave root causes aside. Just destroy the ISIS “state,” argues the Washington Institute’s James Jeffrey. “Of course it would be daunting to solve the conflicts the Islamic State feeds on. But that isn’t, or shouldn’t be, the mission.” Read his argument, here.

The Supreme Court just expanded the FBI’s hacking powers. The new changes will go into effect in December unless Congress votes to override them, which doesn’t appear likely. From The Atlantic, here.

Welcome to the Monday edition of The D Brief, by Ben Watson and Bradley Peniston. On this day in 1964, the aircraft-carrier-turned-cargo-ship USNS Card was sunk in Saigon Harbor by Viet Cong commandos. Send your friends this link: http://get.defenseone.com/d-brief/. And let us know your news: the-d-brief@defenseone.com.

The CIA live-tweeted the UBL raid yesterday to commemorate the five-year anniversary of what it calls “one of the great intelligence successes of all time.” If nothing else, the tweetstream provides a good timeline of events, here.

Or dis the agency’s Twitter show along with these “haters” compiled by Al-Jazeera.

And while you’re at it, read up on the “efficacy” of decapitation as a U.S. counterterrorism strategy, via U.S. Army Lt. Col. Bryan Price, who directs the Combating Terrorism Center at West Point, writing in The Cipher Brief. Two dominant considerations are apt to keep the strategy atop the list of U.S. options. Read why, here.

Who these guys are: “Launched in 2004 by a team that includes PayPal founder Peter Thiel, Palantir makes data analysis software that is rumored to have helped U.S. forces track down and kill Osama bin Laden and prosecutors convict Ponzi schemer Bernie Madoff. The company’s products, named Gotham and Metropolis, comb through massive amounts of information to find connections between data points. Since much of that data is highly confidential, Palantir is notoriously tight-lipped about its work.”

A glimpse at the numbers: “Palantir employed 1,800 people last year and pulled in $1.5 billion in revenue—showing more than 100 percent revenue growth over the year before, according to PrivCo, which aggregates and analyzes private company data. Palantir declined to comment.” Read the rest, here.

U.S., India in anti-sub talks with an eye to China while New Delhi preps the “launch its first locally-built submarine armed with nuclear tipped missiles,” Reuters reports. “Both the United States and India are growing concerned at the reach and ambition of the Chinese navy, which is taking an increasingly assertive stance in the South China Sea and is challenging India’s domination in the Indian Ocean. New Delhi, shedding its decades-old reluctance to be drawn into America’s embrace, agreed last month to open up its military bases to the United States in exchange for access to weapons technology to help it narrow the gap with China.” And much of those talks are expected to focus on anti-submarine warfare since “Chinese submarines have been sighted on an average four times every three months. Some are seen near India’s Andamans and Nicobar islands that lie near the Malacca Straits, the entry to the South China Sea through which more than 80 percent of China’s fuel supplies pass.”

The two nations are planning joint exercises in the northern Philippine Sea next month, with Japan also taking part in that. More from that front, here.

For your eyes only: Read a blistering critique of Washington’s Afghanistan policy from the pen of an anonymous Green Beret whose input was declassified as part of Friday’s Kunduz bombing investigation released by the Pentagon. The U.S., he wrote, is in a “decrepit state that grows out of the expansion of moral cowardice, careerism and compromise devoid of principle, exchanged for cheap personal gain. We owe the man on the ground more than that, because for him, the decisions that he makes hopefully lands him somewhere between the judge’s gavel and the enemy’s bullet.” Much more where that came from, here.

Finally: time to update the caption on the Marines’ famous Iwo Jima flag-raising photo? The Marine Corps has launched an inquiry into an amateur historian’s claims that one of the men has long been misidentified, reports the Omaha Press-Herald. The newspaper first reported on the work of Omahanian Eric Krelle in 2014; now the Corps is apparently having doubts itself. Read on, here. 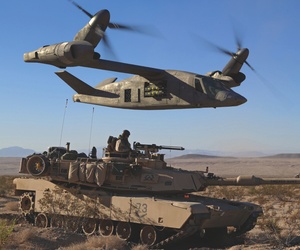 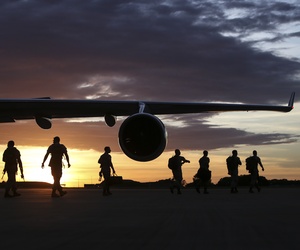 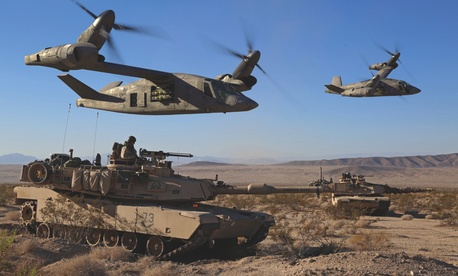 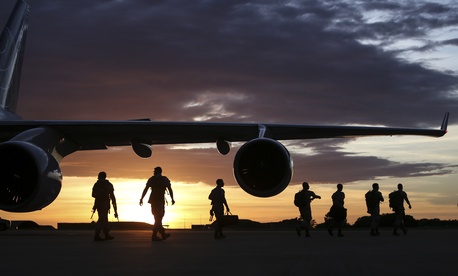