Pro-Syrian forces have taken back half of the rebel-held Damascus suburb of Eastern Ghouta, the Washington Post reports this morning from Beirut. As with most concerted offensives by the Assad regime and its allies, this one is seemingly as bloody as the march on Aleppo in December of 2016. One way it’s different: continuous claims of chemical weapons use, the Post writes. “Doctors in Eastern Ghouta published photographs Tuesday of children they said had been burned by napalm. Chlorine bombs also have allegedly been dropped, despite warnings from senior U.S. officials that the use of chemical weapons might draw a military response.”

But since this is an ongoing (and particularly intense) battle, none of the CW allegations can be proved “because Eastern Ghouta is inaccessible.”

Meantime, “Eastern Ghouta health authorities estimated Tuesday that more than 1,400 people have been killed since the Feb. 18 assault on the enclave began, with 840 of those deaths occurring since the Security Council adopted a 30-day cease-fire Feb. 24.” More here.

By the way: Russian Army Gen. Valery Gerasimov says Syrian rebels are going to use chemical weapons and let the U.S. blame Syria and Russia for it. Military Times has more from Moscow’s information war still going on in Syria and beyond, here.

CENTCOM’s Gen. Votel says Syria has won the civil war, Military.com reported Tuesday. The setting: a Senate Armed Services Committee hearing. There, Sen. Lindsey Graham, R-S.C., asked, “Is it too strong a statement that, with Russia and Iran’s help, Assad has won the civil war in Syria?”

Replied Gen. Joseph Votel: “I don’t think that is too strong of a statement. I think they have provided him the wherewithal to be ascendant at this point.”

Does that mean “Assad must go” is out as U.S. policy? “I don’t know that that’s our particular policy at this particular point,” the general replied. Votel said America’s attention will now pivot to the “increased threats to Israel and Jordan from Iran’s support of Hezbollah forces in Lebanon.” A bit more, here.

Votel also repeated his description of Moscow’s involvement in the Syrian war, using the same words delivered to the House Armed Services committee when he called Russia plays the dual roles of “arsonist and firefighter” in Syria. That in the U.S. Naval Institute News summary, here.

For the record, “the U.S.-backed Syrian Democratic Forces currently hold more than 400 detainees” in Syria, and that number has been steadily growing, Votel told lawmakers Tuesday. Figuring out how to get all those fighters back to their home countries has proven to be a herculean task since “Officials have said that only one or two detainees have been returned to their country.” That, here.

Here’s What the Services Want from Congress This Year // Caroline Houck: After lawmakers pass the budget promised by February’s bipartisan deal, the three secretaries have other priorities for legislative action.

Trump Calls for a Space Force, a Concept His Pentagon Opposes // Marcus Weisgerber and Caroline Houck: The president’s words could reanimate a legislative proposal that the defense secretary and others thought they had killed.

Putin Says Russia’s New Weapons Can’t Be Beat. With AI and Robotics, They Can. // Ghost Fleet co-author August Cole and SparkCognition’s Amir Husain: Instead of single interceptors rising to meet an enemy missile, think about swarms of sub-launched UAVs armed with explosives, sensors, and brains.

The US Navy Should Start Weaning its Reactors off Bomb-Grade Uranium // UT Austin’s Alan J. Kuperman: Most of the world’s reactors use low-enriched uranium. There are at least three good reasons the U.S. fleet should as well.

Exit, Rex Tillerson // Krishnadev Calamur: The secretary of state is out after 14 months on the job.

Welcome to this Wednesday edition of The D Brief by Ben Watson and Bradley Peniston. Email us. And if you find this useful, consider forwarding it to a friend or colleague. They can subscribe here for free. OTD1961: A B-52 crashed in Nevada with two nuclear bombs aboard.

Fitness enthusiasts: You can get back on Strava now that the company says it has “overhauled” the map that revealed sensitive military locations around the globe when user data was released in 2017.
What’s different now? Reuters reports “Roads and trails with little activity will not show up on the revised map until several different users upload workouts in that area, the company said. The map will also be refreshed monthly to remove data people have made private.”
Reminder: “Strava customers have the option of keeping their workouts private, and the map included no names. But the episode underscored how big data sets held by Silicon Valley companies can be used for unintended purposes.” More from Reuters, here.

Some things to consider about the United Arab Emirates in light of Tuesday’s “Rexit” of Secretary of State Rex Tillerson after he was fired by President Trump, according to İyad el-Baghdadi, UAE-born founder of the Islam and Liberty think tank:

The next Director of the VA could be Energy Secretary Rick Perry, the Wall Street Journal reported Tuesday following weeks of bad headlines for current Veteran Affairs Secretary David Shulkin.

China is planning a USAID-style agency for foreign aid, the Washington Post reported Tuesday. “The new agency for international development coordination will integrate responsibilities currently undertaken by the ministries of Commerce and Foreign Affairs and integrate its work with Xi’s ambitious Belt and Road project, a major effort to increase Chinese lending for infrastructure development around the world. The new agency will draft foreign aid policies, grant aid and supervise projects.”
The stated thinking behind all this: “to give full play to foreign aid as a key means of major-country diplomacy… [and] better serve the nation’s diplomatic strategy,” including the Belt and Road project, according to State Councilor Wang Yong.
By the numbers, “China provides few details of its aid program but said it sent more than half of its foreign aid of more than $14 billion between 2010 and 2012 to Africa.”
In contrast, “Analysis by AidData, a research project at the College of William & Mary in Williamsburg, Va., showed that U.S. official development assistance between 2000 and 2014 reached $366 billion, dwarfing the $81 billion coming from China. But Beijing nearly closed the gap with a much larger flow of $216 billion in commercial, non-concessional lending.” More here.

South Korea just ordered 90 “bunker-busting” missiles, Defense News reported Tuesday.
What these things are: Taurus long-range, air-launched, bunker-busting missiles from German company Taurus Systems GmbH. “The latest contract for the Taurus missile is the second of its kind since 2013, when the DAPA ordered 170 Taurus missiles to arm the fleet of F-15K fighter aircraft. Each missile costs about $1.8 million.”
A bit more: “The missile is a core asset of South Korea’s ‘Kill Chain’ pre-emptive strike systems against North Korea’s nuclear and missile programs upon imminent threat. The precision-guided missile has a range of 500 kilometers and is said to be able to destroy North Korea’s major underground facilities, including Kim’s hideouts, with pinpoint accuracy.” Continue reading, here.

Trump calls for a Space Force — after his own Pentagon leaders thought they had killed the idea. “You know, I was saying it the other day — because we’re doing a tremendous amount of work in space — I said maybe we need a new force. We’ll call it the Space Force,” the president told troops at Marine Corps Air Station Miramar outside San Diego. “And I was not really serious, but I said, ‘What a great idea.’ Maybe we’ll have to do that. That could happen.”
And that’s how the president inserted himself into a bitter policy debate between Congress and the Air Force, and squarely on the side of the lawmakers, write Marcus Weisgerber and Caroline Houck. “Air Force leaders, who oversee the bulk of the military’s satellites and launches, spent the last year fighting off proposed legislation that would have called for standing up a Space Corps as part of the Department of the Air Force, just as the U.S. Marine Corps is part of the Department of the Navy. Last July, Defense Secretary James Mattis took the unusual step of speaking out against the proposal as it made its way through Congress. Even unnamed White House officials told CNN that creating a space corps was ‘premature at this time.’” Read on, here.
The president interrupted his musing about a Space Force to taunt the reporters covering his speech. “Fake news!” he said, drawing cheers and laughter from the crowd. (Video, via the White House, here.) For an explanation about how such attacks endanger both journalists and military leaders trying to build trust with one another, we’ll reup this February 2017 piece by Defense One Executive Editor Kevin Baron: “Trump’s Dangerous ‘Dishonest’ Message to the Troops.”

Finally today, a brief detour into nuclear entertainment and education. Take a trip back to 1984 when the BBC aired a TV movie about nuclear war that was deemed so disturbing, it was only re-aired once — a year later, Vice’s Motherboard wrote in late February. The movie, called “Threads,” was recently re-released on Blu-ray, and “tells the story of the British industrial city of Sheffield and how it might fare during a sustained nuclear attack on the United Kingdom.” Motherboard spoke to the film’s director, Mick Jackson, comparing the atmosphere of today with that of the Reagan administration around the time “Threads” was produced.
What you’ll also learn in that report: “In 1965, the BBC produced a docudrama called ‘The War Game.’ The forty-minute film depicts a Soviet attack on a an English city. A droning British narrator vividly describes the horror of the attack as people scramble on the screen to survive and, much like ‘Threads,’ society breaks down. ‘The War Game’ so horrified BBC executives that they shelved it.” And yet it still came out in limited release in London, and went on to win an Oscar for best documentary feature in 1966. Read more — and see a few clips of each film — here. 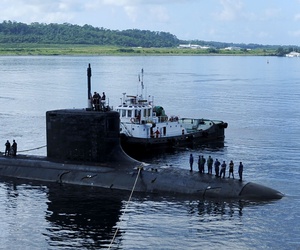 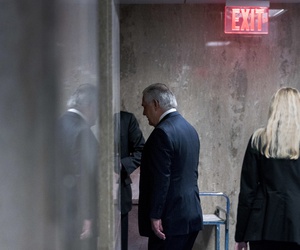 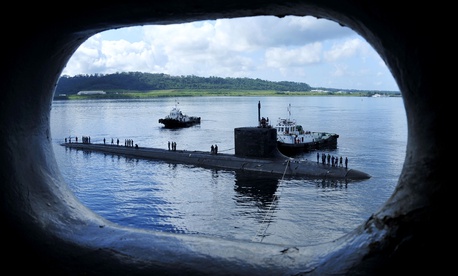 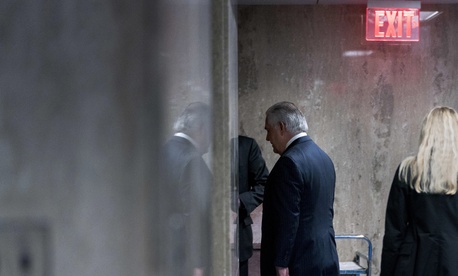