Sound and fury: After slamming NATO, Germany, and America’s other European allies, Donald Trump signed on to a rather standard joint statement reaffirming the alliance’s value against Russia and other threats. “I believe in NATO, I think NATO is very important, probably the greatest ever done,” he said at a half-hour press conference on the summit’s second and final day. “Yesterday I let them know that I was extremely unhappy with what was happening” — that’s a reference to his demand, delivered by Twitter, that NATO allies spend 4 percent of their GDPs on defense — “and they have substantially upped their commitment.”

That’s not true, said French President Emmanuel Macron. NYT: “A communiqué was issued yesterday,” Mr. Macron said. “This communiqué is clear. It reaffirms the 2 percent by 2024 commitments. That’s all.”

And in case you’re curious, Macron also said Trump “never at any moment, either in public or in private, threatened to withdraw from NATO.”

So…what now? Reporting from Brussels, Defense One’s Kevin Baron writes that the feared apocalypse didn’t happen. “Like much of the international order, they said, NATO is being challenged and questioned like never before, and perhaps healthily. If the next generation wants to preserve the alliance and the international order it supports, then the think-tank academics and bureaucrats and officers in attendance will have to do something they never thought they’d have to. They’re going to have to sell it.” Read on, here.

Here’s another optimistic take, looking back through history: “The West Will Survive Trump”.

But others say the U.S.-European break has already happened. Ivan Krastev, writing in the NYT: “In Mr. Trump’s world, there no longer is any concept of alliances. It is not that he is displeased with European military spending or with Europe’s position on Iran. Rather, it is that in a world where America is a disrupter and not a force for stability, allies are now a burden. They have expectations and claims that constrain America’s policies, whether that is a preferential trade agreement or a commitment to joint military exercises. Worse, they insist on predictability and reciprocity, which are completely out of sync with Mr. Trump’s view of the world.”

More presidential false statements: “Trump said again this morning that the U.S. has been paying ‘probably 90% of the cost of NATO,’” Daniel Dale of the Toronto Star tweeted this morning from Brussels. “The U.S. has been paying 22% of actual NATO costs, spending 72% of the total defence spending of the alliance.” As well, AP has a grab-bag of POTUS remarks over the last seven hours, including an unspecified “escalation” between Iran and the U.S., here.

One actual takeaway from this week’s meeting: NATO members agreed “to scale up training efforts in Iraq by establishing a training mission to help develop the capacity of Iraqi security forces and defence institutions.”

Apropos of nothing, here are a few words used to describe this week’s summit by various domestic and international press outlets: “chaotic,” “upended,” “uncomfortable,” “combative,” “turmoil” — and this, from the NATO secretary general: “comparable to the Suez crisis.”

Next, Trump is off to the birthplace of Churchill. He offered a preview at his press conference, limned this way by a Telegraph editor:

Helsinki preview: The summit between the presidents of U.S. and Russia on Monday in southern Finland will be “just a loose meeting,” Trump told reporters in that presser this morning.

For the record: Russia is still guilty of an “illegal and illegitimate annexation of Crimea and ongoing destabilisation of eastern Ukraine,” according to an official NATO communique released Wednesday.

So how is the Ukraine conflict going? There were a whopping “1,200 ceasefire violations recorded last week,” the monitors of the Organization for Security and Co-operation in Europe (OSCE) report this morning. There were “42 weapons in violation of agreed withdrawal lines — 26 in [non-governmental control] and 16 in [Kiev’s troop-controlled] areas.”

Said OSCE’s Alexander Hug: “We want and hope for peace but the facts tell us otherwise: weapons in place, mines in ground and no disengagement are like tinder waiting for a spark that can set off a bushfire. Already signs show recommitment is fading.”

Donald Trump Didn’t Kill NATO, But… // Kevin Baron: Trump was on relatively good behavior, but NATO leaders acted more like salesmen than statesmen, defending the very existence of the alliance that protected the West for 70 years.

China, Russia, and the US Are All Building Centers for Military AI // Patrick Tucker: But their burgeoning approaches to state-sponsored research are divergent as the countries themselves.

NATO Doesn’t Need 4% Defense Spending // Peter Beinart, The Atlantic: Trump’s new call for allies to spend 4 percent of their GDPs on defense makes no sense. Even America shouldn’t do that.

The West Will Survive Trump // Richard Fontaine and Vance Serchuk: The trans-Atlantic alliance has seen worse.

Welcome to this Thursday edition of The D Brief  by Bradley Peniston and Ben Watson. And if you find this useful, consider forwarding it to a friend or colleague. They can subscribe here for free.

The Russian military has just entered the birthplace of the Syrian civil war, Reuters reports from neighboring Jordan. Rebels in the city of Daraa have entered into talks with Russia to hand over the city to the Assad regime. And this morning, talks of raising the state flag over the city have already begun, Reuters reports separately.
Meanwhile, “Israel has no problem with Assad,” but it would like Iranians to leave Syria entirely. That comes from Haaretz, reporting this morning from Moscow where Prime Minister Benjamin Netanyahu dropped for a chat with Putin’s team.
And just before Netanyahu and Putin spoke, the IDF shot down a Syrian drone that had reportedly entered Israel’s airspace. That and more here.

North Korean officials didn’t even show up for a troop repatriation meeting with the U.S., the Washington Post reports this morning from Seoul.
The set-up: “State Department officials had said that the meeting would likely take place on July 12, though they had said that the date could shift.”
What actually happened: “On Thursday, however, Department of Defense and United Nations Command officials were left waiting in the DMZ’s Joint Security Area. The expected North Korean officials never arrived,” according to an anonymous U.S. official. “We were ready. It just didn’t happen. They didn’t show,” the official told the Post.
For the record: “According to estimates from the Pentagon, 7,700 U.S. troops are still unaccounted for from the Korean War. Of that number, 5,300 are believed to have been killed north of the 38th parallel, which marks the border between the two Koreas.”
So what next? A possible meeting on Sunday, according to South Korea’s Foreign Ministry — relaying what they say are North Korean military officials’ requests. Recall President Trump told a crowd of supporters in Duluth on June 20 that the remains “have been sent back.”

POTUS45 “wants tough new Air Force One paint job,” Axios reports this morning. He reportedly wants something “more American” and in less of that blue “Jackie Kennedy color” than it is now — a color formally known as “luminous ultramarine blue,” according to presidential historian Michael Beschloss.
For what it’s worth: “[T]he change could cause friction with the Air Force,” Axios writes, adding, “some top officers like the current look, which they point out is ‘known around the world.’”
And one more thing: “Trump may only get to enjoy his dream ride if he’s reelected: The new 747s are very unlikely to be in presidential service before Jan. 20, 2021.” Read on — if for no better reason than all the trivia Beschloss unloads that may not have known — here.

Space Force trivia: SecDef Mattis may have inadvertently foreshadowed Trump’s desire for a new branch of the military, USA Today’s Tom Vanden Brook reported Wednesday after looking over a Mattis proposal from 2005. Mattis was commander of the Marine Corps’ Deputy Commandant for Combat Development when he signed documents containing “a wish list of capabilities the Marine Corps wanted for combat anywhere on the planet on short notice.” Short notice as in two hours or less.
The idea was “to fund the Small Unit Transport and Insertion Capability, essentially rocketing a 13-man squad into action.” That plan was “tucked into the document with more mundane, immediate concerns at the time, including protecting Marines from roadside bombs in Iraq.” More to that story, here.

And finally today, ABC News brings us the viral story of John Hart, 71, who was asked to film a marriage proposal by a kind stranger who — like Hart — was visiting the Sandia Peak Tramway in Albuquerque, New Mexico, in late June. There, “Jayce Flauding of Sandia Park, New Mexico… handed his phone and gimbal to Hart.”
The problem: “[T]he device was backward so, instead, Hart ended up recording his own reaction to the moment.”
The kicker: Hart was a former photographer in the Navy, Fox News tells us. Watch the video for yourself, here. 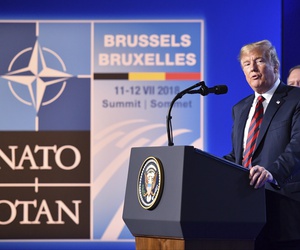 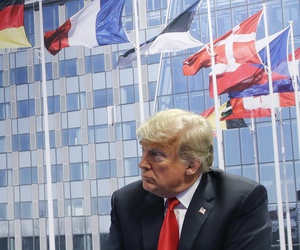 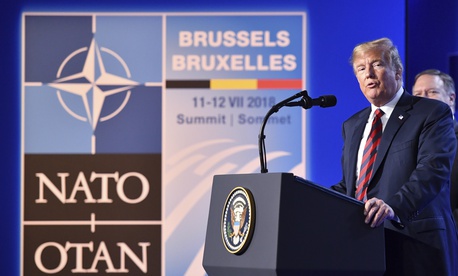 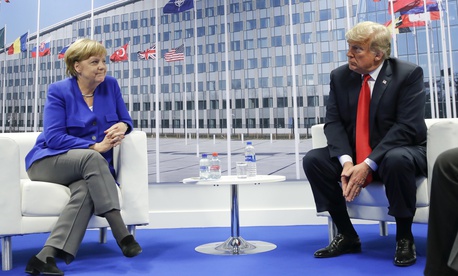