Trump’s ambassador to Saudi Arabia wants “reasonable responses short of war” for the alleged attacks this weekend at a UAE port near the Hormuz Strait, John Abizaid said today in Riyadh (Reuters). Abizaid, recall, was once upon a time the four-star general in charge of U.S. Central Command. Today, he may be the only Trump official not terribly eager to steer the U.S. toward a new Middle East conflict with Iran.

If there is a silver lining, the plans “do not call for a land invasion of Iran, which would require vastly more troops” and “reflects the influence of Mr. Bolton, one of the administration’s most virulent Iran hawks, whose push for confrontation with Tehran was ignored more than a decade ago by President George W. Bush.” What’s more, there’s no indication yet Trump would order up so many troops when he campaigned, in part, on bringing troops home from Afghanistan and the war against ISIS. Continue reading, here.

Still lacking: “any details about what exactly happened or any proof as yet about the possible Iranian involvement in the explosions.” Not that that kept the Pentagon from blaming Iran “or Iranian-backed proxies” for what’s said to have happened.

What’s the Pentagon saying about these alleged attacks? “[E]ach ship has a 5- to 10-foot hole in it, near or just below the water line,” according to a “team of U.S. military experts [that] was sent to investigate the damages at the request of the UAE,” AP writes, citing U.S. officials who didn’t want to put their name behind the charges.

See one of the allegedly sabotaged boats in this photo via Reuters. See a few more photos of the ships — none of which show more damage than that Reuters image — via AP, here.

When asked about the event Monday at the White House, President Trump said, “We’ll see what happens with Iran. If they do anything, it will be a very bad mistake.”

One Iranian official made his own unproven accusation this morning, blaming the tanker attacks on “Israeli mischief,” Reuters reported separately from Geneva. Otherwise, Iran’s foreign ministry on Monday called the developments “worrisome and dreadful.”

Here’s one of the headlines that ran Monday, also with photos, from Air Force Times: “B-52 bombers, F-15 fighters fly first deterrence sorties pointed at Iran.”

Ryan Evans of War on the Rocks asked in response to that U.S. messaging: “Deterring what exactly?” Some of the answers followers provided:

Piling on. The Saudis this morning say “oil infrastructure sites belonging to the country’s state-run oil company Aramco have been targeted and that at least one of the attacks was carried out by drone strikes,” AP reports from Dubai in a rolling-updates webpage this morning.

Allegedly targeted in this new attack: “a petroleum pumping station supplying an east-west pipeline between the Eastern Province and to the Yanbu Port on the Red Sea.” A fire “at a station along the pipeline” is said to have ignited from the incident, which “came shortly after Yemen’s Houthi rebels claimed an assault on the kingdom.” More on those Houthi-claimed attacks — which the group said involved “seven drones [that] carried out attacks on vital Saudi installations” — via al-Jazeera, here.

The vessel in question: Spain’s “Méndez Núñez frigate, with 215 sailors on board, [which now] will not cross the Strait of Hormuz into the Gulf together with the fleet headed by the USS Abraham Lincoln aircraft carrier. The [Spanish Defense] Ministry declined to elaborate on the reasons of the sudden change.” Unnamed Spanish officials said the government had no interest in the U.S. dragging it into a possible war with Iran.

The official: Dr. Yleem Poblete, and she was the assistant secretary of state for arms control, verification and compliance, WaPo writes. “Poblete was a favorite among hard-line anti-Iran groups such as the Foundation for Defense of Democracies, which hosted her for a speech in July 2018 in which Poblete praised the U.S. withdrawal from the Iran deal.”

Contrary view: “While the State Department can hardly afford to lose another senior leader, it is not clear that Assistant Secretary Poblete was contributing to the advancement of arms control in a helpful or substantive way,” said Alexandra Bell, senior policy director at the Center for Arms Control and nonproliferation and a POTUS44 official. Read on, here.

Siri, Watch That Guy’: Pentagon Seeks AI that Can Track Someone Across a City // Jack Corrigan, Nextgov: The intel community’s researchers are looking for datasets to help train their computers.

Trump’s ‘Maximum Pressure’ Won’t Make Iran Yield // Ali Vaez, The Atlantic: The one thing Tehran would find more intolerable than the crushing impact of sanctions is raising the white flag because of them.

How to Really Honor the Troops // Andrew Exum, The Atlantic: Thousands of soldiers have successfully led combat units without committing atrocities. Pardoning war crimes dishonors them.

Welcome to this Tuesday edition of The D Brief by Ben Watson. Thanks for reading! Subscribe here. On this day in 1955 and five years after the formation of NATO, the Soviet Union established the Warsaw Pact along with Albania, Poland, Czechoslovakia, Hungary, Bulgaria, Romania, and the German Democratic Republic. The pact would last for 36 years before it was disbanded when the Soviet Union collapsed in 1991.

Acting SecDef Shanahan to Fox: “We have a crisis at the border. A national emergency declared by the president. The commander in chief has given me a direct legal order to secure the border. I’m securing the border.”
Replied former Pentagon spox David Lapan on Twitter: “No. The Department of Defense cannot “secure the border.” Period. Enforcement of immigration laws is a domestic law enforcement function of DHS and DoJ. DoD can only support in limited ways.”
Shanahan on Trump: “I’ve worked for CEOs. He’s focused on outcomes and results. Will we always agree on everything? No. Are we focused? Do we have the same interests? And the same focus? Yes. My job is to get the results we need to make this country successful. To defend this country.” There’s not much else to the interview — certainly nothing you didn’t already learn in Monday’s D Brief — but you can read the rest at Fox, here.

Coming the first Saturday of June: A new Trump-derived strategy for the “Indo-Pacific” region, something POTUS45 teased as far back as November 2017. Shanahan is slated to unveil it at this year’s Shangri-La summit in Singapore on June 1. The folks at the International Institute for Strategic Studies previewed that in a short piece published Monday, here.

A word on the months ahead: “The U.S. may face a trifecta of nuclear crises in 2019 because of flawed strategies it pursued toward North Korea, Russia, and Iran in 2018,” Dartmouth’s Nicholas Miller and MIT’s Vipin Narang warned in the January issue of Foreign Affairs.
Narang updated that assessment on Monday, writing on Twitter, “We were too optimistic in this piece. Things are on track to go far worse than we thought likely, or possible. On all three fronts.”

North Korea wants that U.S.-seized ship back because it “was an illegal act that violated the spirit of a summit between the two countries’ leaders,” AP and Reuters report this morning from Seoul.
“The United States committed an unlawful and outrageous act of dispossessing our cargo ship,” state-run KCNA news agency quoted a nameless official as saying. “The latest U.S. act constitutes an extension of the American method of calculation for bringing the DPRK to its knees by means of ‘maximum pressure’ and an outright denial of the underlying spirit of the June 12 DPRK-U.S. Joint Statement,” the official reportedly said.
The huffing and puffing continued: “The U.N. Security Council resolutions the United States mentioned as one of the reasons for robbing our trade vessel equate to a violent infringement of the sovereignty of our country and we have been entirely rejecting them,” the KCNA statement said. “The United States should carefully consider what kind of consequences their daylight robbery could bring to the political situation and should send back our vessel without hesitation.”
The rhetoric from North Korea may be best understood as  “part of a[n] ongoing trend in which the regime sends increasingly alarming signals in an attempt to force a breakthrough in negotiations,” Adam Mount of the Federation of American Scientists told Reuters. A bit more, here.

And now for something quietly alarming: It appears as though “Military attorneys installed tracking malware in emails sent to REPORTERS and defense lawyers” in an effort to chase down leaks, Military Times’ Geoff Ziezulewicz tweeted after reading this AP report Monday about “a Navy SEAL charged with killing an Islamic State prisoner in Iraq.”
At the most basic level, “the intrusion may have violated constitutional protections against illegal searches, guarantees to the right to a lawyer and freedom of the press,” according to the SEAL’s defense attorneys.
That’s a position echoed by the Military Reporters & Editors Association, which on Monday demanded U.S. government officials provide “answers and accountability” in response to the AP report.
So who received the email? Navy Times editor Carl Prine. “If any other reporters were affected, their names must be publicly disclosed and those who are responsible must be held accountable,” said John M. Donnelly, president of MRE. More — though not hardly enough — here.

From censure to cyberspace. One retired Navy rear admiral who was censured in the so-called “Fat Leonard” scandal may “soon be named the executive director of the Cyberspace Solarium Commission,” Task and Purpose reported Monday.
The man in question: Mark Montgomery. “Montgomery was accused of accepting gifts from Leonard Francis, known colloquially as ‘Fat Leonard,’ the President of Singapore-based Glenn Defense Marine Asia (GDMA), while Montgomery was in command of Destroyer Squadron 15 in Japan from 2007 to 2009,” T&P writes. Story here.

Libyan strongman Khalifa Haftar’s offensive against Tripoli is a threat to international peace, EU leaders warned Monday in Brussels, AFP reported. Which means: The EU is running in parallel to U.S. policy, but in opposition to Trump and Putin and Egypt’s Sisi and Riyadh’s MBS and the Emiratis.
ICYMI: Dan DePetris argued in Defense One that Europe should take the international lead on managing the Libyan crisis.

Back stateside: There are now 22 Democratic presidential candidates for next year’s election now that Montana Gov. Steve Bullock has joined the race, the New York Times reports today. Quartz rolled up the other 21, here.

And finally today: What have explorers found on their first trip to the deepest part of the ocean, in the Mariana Trench? Seven miles beneath the surface, Victor Vescovo found “at least three new species of marine life, including a shrimp with extra long legs,” ABC News reported Monday.
But Vescovo also found a bit of garbage down there, too — what looked like a plastic bag and candy wrappers, as the BBC reports. “In total, Mr Vescovo and his team made five dives to the bottom of the trench during the expedition. Robotic landers were also deployed to explore the remote terrain,” the BBC writes. “The scientists now plan to test the creatures they collected to see if they contain microplastics — a recent study found this was a widespread problem, even for animals living in the deep.” Dive deeper…er, continue reading, here. 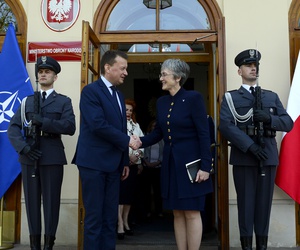 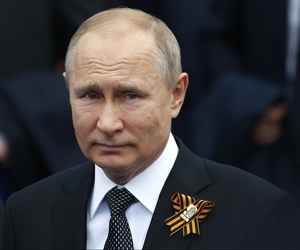 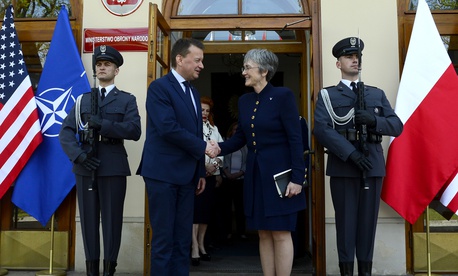 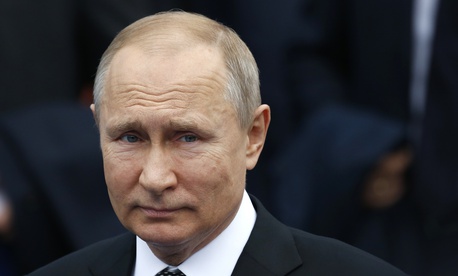