WH peace plan for Afghanistan falls apart; US-Turkey patrols in Syria; Advice to a deploying woman; Iran: we can make nuke fuel; And a bit more.

The White House’s peace plan for Afghanistan appears to have fallen apart this weekend, a development Reuters calls “a stunning reversal” and the Associated Press describes as “the latest example of a commander in chief willing to take a big risk in pursuit of a foreign policy victory only to see it dashed.”

The quick review: President Trump “unexpectedly canceled secret talks planned for Sunday with the Taliban’s major leaders at the presidential compound in Camp David, Maryland,” Reuters reports. “He broke off the talks on Saturday after the Taliban claimed responsibility for an attack in Kabul last week that killed an American soldier and 11 others.”

As if to certify the developments, U.S. Secretary of State Mike Pompeo was asked Sunday on Fox whether Afghan negotiations were dead. His reply: “For the time being they are.”

Here’s Trump’s explanation*, tweeted Saturday as the sun was going down in Washington, and after his 230th day of golf as POTUS:

FWIW, Afghan President Ashraf Ghani was the first to make headlines for cancelling that would-be meeting with the Taliban at Camp David, according to AP’s Friday report from Kabul.

By the way: At least two Republican lawmakers lashed out at Trump for suggesting the Taliban visit Camp David. Find the reax from Rep. Adam Kinzinger of Illinois here, and Rep. Liz Cheney of Wyoming, here.

The Taliban’s reax to Trump’s Saturday tweet: “This will lead to more losses to the U.S.,” spokesman Zabihullah Mujahid told Reuters. “Its credibility will be affected, its anti-peace stance will be exposed to the world, losses to lives and assets will increase.”

Oh, another thing Pompeo said on Sunday, which would seem to be rather big news: “We’ve killed over a thousand Taliban in just the last ten days. So it has not been the case that we’ve been negotiating with our hands tied behind our back.” Cue body-count critiques of U.S. military strategy, like this one from former Council on Foreign Relations scholar Micah Zenko.

Some advice on how to move forward. Chris Kolenda, who as a U.S. Army commander in 2007 and 2008 in Afghanistan, managed to direct the only unit “in the history of the war to have motivated a large insurgent group to stop fighting and join the government,” according to his CNAS bio, chimed in on Twitter with this reax: “Sadly, this is what happens when #Afghanistan talks aim for a deal rather than a process that builds confidence — no one trusts the others to deliver on commitments. This important effort needs a full reset.”

And our final bit of Afghanistan-related news today: According to Politico, the Pentagon and the White House want to nominate a man named Lou Bremer to oversee America’s special operations forces — a job officially known as the assistant secretary of defense for special operations and low-intensity conflict.

For the record, “Defense Department spokesman Jonathan Hoffman said he had no personnel moves to announce.”

‘Get a Weapon’: Advice to a Deploying Woman // Sandra Sidi, The Atlantic: That’s what a veteran told me as I prepared to join U.S. forces in Baghdad. I thought he meant I needed a way to fend off the enemy.

Coming Soon to a Battlefield: Robots That Can Kill // Zachary Fryer-Biggs, The Atlantic: Tomorrow’s wars will be faster, more high-tech, and less human than ever before. Welcome to a new era of machine-driven warfare.

How Not to Run the World // John Gans, The Atlantic: Once upon a time, the American commitment to regularity in meetings and reasoned decision making allowed the rest of the world to sleep a little easier.

Welcome to this Monday edition of The D Brief from Ben Watson with Bradley Peniston. If you’re not a D Brief subscriber, sign up here. On this day in 1942, the first and only attacks on the U.S. mainland during WWII happened when Japanese pilot Nobuo Fujita firebombed a forest near Brookings, Oregon.

The U.S. Air Force is under investigation by the House Oversight Committee for allegedly boosting Donald Trump’s Scottish resort with what would seem to be unnecessary stops and purchases of at least $11 million “at the Prestwick Airport — the closest airport to Trump Turnberry,” according to Politico’s Natasha Bertrand, reporting Friday evening. One of the perks reportedly included free rounds of golf for members of the U.S. military.
Why this is particularly notable: “The property lost $4.5 million in 2017, but revenue went up $3 million in 2018,” Bertrand writes, “rais[ing] the possibility that the military has helped keep Trump’s Turnberry resort afloat.”
Update: Make that U.S. Air Force fuel purchases totaling $17.2 million, not the $11 million Politico initially reported from Prestwick Airport, according to the New York Times.
Reax from Walter Schaub, who directed the U.S. Office of Government Ethics under POTUS44: “To believe USAF’s claim that stays at Turnberry were normal, you’d have to believe:

What SecDef Esper is cutting to fund Trump’s border barriers, continued. The $3.6 billion being diverted from Congressionally approved projects includes funds for:

The U.S. and Turkey conducted more joint patrols of northern Syria this weekend — patrols Syrian officials say are a “flagrant violation” of the country’s sovereignty and “territorial integrity,” Reuters reports today.
About the patrols: They occurred “some 15 kilometers (nine miles) east of the Turkish border town of Akcakale, near Syria’s Tel Abyad,” Reuters writes. “With two military helicopters briefly overhead, they headed south for several hours before returning to Turkey.”
And what would a U.S.-Turkey story be without a disruptive remark from President Tayyip Erdogan? He told reporters mere minutes after the patrols ended on Sunday, “We are negotiating with the U.S. for the safe zone, but we see at every step that what we want and what they have in mind is not the same thing… It seems that our ally is looking for a safe zone for the terrorist organization, not for us. We reject such understanding.” More from Reuters, here.
BTW: The U.S. Treasury Department says it’s finally mulling sanctions against Turkey over its purchase of that Russian S-400 air defense system.
Elsewhere in Syria this weekend, more mysterious airstrikes hit Iran-backed troops near the Iraqi border, AP reports. AFP has more here.
Hezbollah says it shot down an Israeli drone over south Lebanon on Monday. Israel: a “simple” drone “on a routine mission in northern Israel fell” on Sunday. AP, here.
And Iran continues to inch away from the 2015 nuclear deal, telling the world this weekend that it’s begun using “advanced centrifuges” as it “threatens higher [uranium] enrichment.” AP has that story, here.

The Saudis want to enrich uranium for nuclear power, Reuters reports off remarks from Riyadh’s energy minister, reminding the world of the Kingdom’s intentions during an energy conference today in the UAE.
“We are proceeding with it cautiously…[and are] experimenting with two nuclear reactors,” Prince Abdulaziz bin Salman told the audience in Abu Dhabi.
Things could move quickly, too, since according to Reuters, “The tender is expected in 2020, with U.S., Russian, South Korean, Chinese and French firms involved in preliminary talks about the multi-billion-dollar project.”
Worth noting (emphasis added): “In order for U.S. companies to compete for Saudi Arabia’s project, Riyadh would normally need to sign an accord on the peaceful use of nuclear technology with Washington, under the United States Atomic Energy Act.” But behaving “normally” is not a common complaint of the Trump administration, especially when it comes to the sale of nuclear technology to the Saudis. More from Reuters, here.
ICYMI: In March, Energy Secretary Rick Perry approved six secret authorizations by U.S. companies to sell nuclear power technology and assistance to Saudi Arabia.
Opinion: CFR’s Sagatom Saha argued last year that “The US Must Build Saudi Arabia’s First Nuclear Reactors.”

The more you know: early-1960s nuclear strategy edition. Did you know that during the Cuban missile crisis, the U.S. was willing to accept a Soviet nuclear attack on Turkey in response to a possible U.S. airstrike on Cuba? Or, in the words of Philip Nash in his 1997 book, The Other Missiles of October: Eisenhower, Kennedy, and the Jupiters, 1957-1963, “the U.S. seriously considered sacrificing the Turkish Jupiters to Soviet retaliation and leaving it at that — a sharply limited tit-for-tat reminiscent of the New-York-for-Moscow exchange in Eugene Burdick and Harvey Wheeler’s best-selling novel Fail Safe.” (h/t to Aaron Stein of the Foreign Policy Research Institute for spotting this bit of cold, calculating nuclear history.)

North Korea “has likely added about 10 bombs’ worth of fissile material to the roughly 30 bombs’ worth it possessed in late 2017,” wrote Siegfried Hecker, the former head of America’s nuclear laboratory, in an essay last week for 38 North.
Hecker’s quick assessment: “There is not much the US can do to force a resumption of talks [on denuclearizing] if the North is determined not to reengage, but if talks do get underway, they will need traction very soon. The longer the United States waits for what it thinks is a better deal, the more it risks that the opportunity for such action will slip away—and that future negotiators will face an even tougher predicament, with much more advanced DPRK nuclear and missile capabilities.” Read on in full, here.
By the way: U.S. Cyber Command “released samples of North Korea’s government-funded malware to researchers during the early hours of North Korea’s Day of the Foundation of the Republic — a move seemingly timed to unnerve the hermit nation during a national holiday,” Axios reported on Sunday.
One message to takeaway from this: The North Koreans “aren’t operating free from attribution, which limits the range of activities they should see as being of acceptable risk,” tweeted Andrew Thompson of Mandiant cybersecurity. “That is one of the reasons attribution matters.”

ICYMI: China and Russia (again) pledged to deepen their military cooperation on Friday, according to the Chinese Defense Ministry.
Reminder: This is almost an annual messaging product of the two countries, as this Diplomat report from 2017 indicates, and this April article in Foreign Affairs questions. There was even a New York Times report from 2015 with this message, too. (And here’s sort of a history of the relations between the two Communist-affiliated countries, penned in 2014.)

And finally today: a brief pause for some humor. The folks at the Duffel Blog delivered a bit of satire from the intersection of emerging weapons and American job-creators. Their headline:  “New Pentagon superweapon spreads jobs throughout every congressional district.” #F35 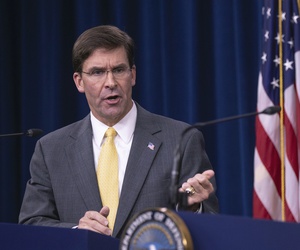 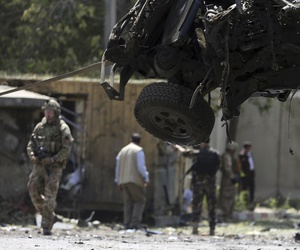 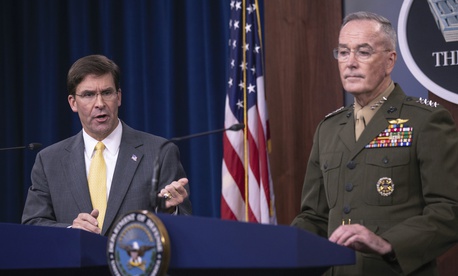 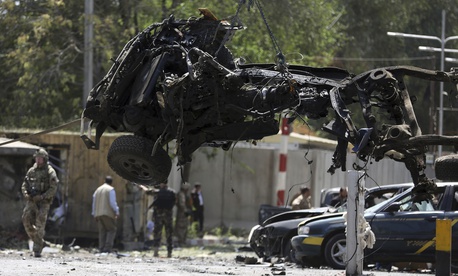