Shifting Left: How DevSecOps Strengthens Agency Security and Risk Management
Skip to Content
Get all our news and commentary in your inbox at 6 a.m. ET.
Science & Tech
The Public Will Soon Be Able to Buy Military-Grade Satellite Images

The view from space is about to get a lot clearer for the public. And that’s a good thing for the military. By Patrick Tucker

On Wednesday, the world’s premier marketer of high-resolution satellite imagery, DigitalGlobe, successfully launched their new WorldView 3 (WV3) satellite. As Defense One reported in April, the WorldView 3 will operate 380 miles above the Earth’s surface and will go from pole to pole in 98 minutes, moving at 7 miles per second.

Who will buy the imagery?

DigitalGlobe’s number one client remains the government, and the largest government client is the National GeoIntelligence Agency, NGA, which gave the company $32.3 million in the second quarter of this year. But DigitalGlobe sells their services to other bodies like NATO to help track Russian troop movements on the Ukrainian Border, and to Google for use with Google Maps. DigitalGlobe’s image archive is the best on the planet with enough pictures to show every corner of the Earth 30 times over.

The satellite uses a shortwave infrared sensor to see through haze, dust and smoke to tell you things like how moist the soil is that you’re looking at. The WV3 can identify minerals, differentiate between tree species—even help determine the health of trees. The images themselves are also pin-point accurate on a map, with each pixel assigned its own latitude and longitude number.

The new satellite’s most important feature is its 30-centimeter resolution, which would “allow you to see not only a car, but the windshield and the direction the car is going. Something as small as home plate,” according to the company. 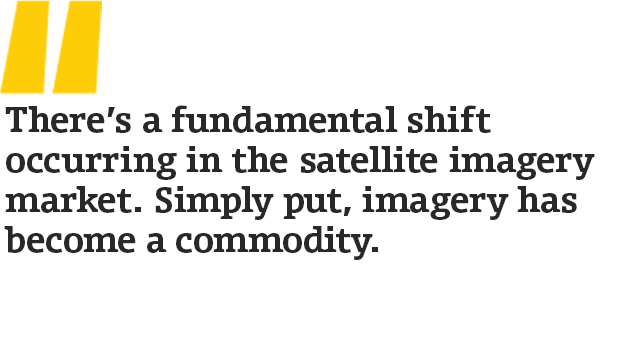 While that 30-centimeter resolution isn’t sufficient to do computerized facial recognition from space—depending on the light, the angle and the analyst, pictures at that scale could help positively identify Russian military commanders operating in Ukraine. Or it could help illumine ISIL leaders like Abu Bakr al-Baghdadi. The U.S. military has a big interest in what’s called “non-permissive data collection,” which really means the collection of data about a subject without the subject’s knowledge

Prior to this year, the government didn’t want the public to have access to pictures from space at that level of detail, forcing DigitalGlobe to degrade the images that they were selling to a resolution of half a meter. In May of last year, Digital Globe petitioned the National Oceanic and Atmospheric Administration to free them up to sell imagery as at a higher resolution at open markets.

With little notice or fanfare, they won. On June 11th, the company issued a release stating that the government would allow them to sell images at a resolution as detailed 25 centimeters starting six months from Wednesday's launch.

It’s not—on the one hand—bad news for the U.S. that non-permissive data collection from space is now much more open to the public. As Joseph Marks reports in a piece for Defense One sister site NextGov, by opening up the images for public purchase, the price drops and that means that the government will be able to buy a lot more imagery at lower cost. (As previously reported, the company charges a minimum order of 100 square kilometers at $4000.) But on the other hand, it also means that the ability to see a baseball plate, license plate, or possibly a face from 380 miles above the Earth’s surface has suddenly become much less of an exclusive, elite capability.

DigitalGlobe is prohibited from selling high-resolution satellite images if the sale presents a national security threat or foreign policy concern. When a potential client makes contact, the company has to vet the person against a list of known terrorists. The U.S. government retains the right to impose “shutter control” at any time. But they’ve never had to according to DigitalGlobe CTO Walter Scott. The company self-monitors what pictures they sell and to whom. For instance, they sold no images of sensitive areas in Iraq during operation Iraqi Freedom.

It’s an amazing new tool but that doesn’t mean the public will use it. Upstart companies selling microsatellites at much lower cost are giving DigitalGlobe some very serious competition. A company out of California called Planet Labs currently operates the largest constellation of earth-imaging satellites, 28 so-called Dove microsatellites, which the company put into orbit near the start of the year. Others, like SkyBox, KickStat and SkyCube, etc. are all finding strange niches and funding in a rapidly growing marketplace. None of these satellites can offer the sort of images that the WV3 can (many don’t take pictures at all), but they do serve as an indication of how quickly the cost of space access is dropping. 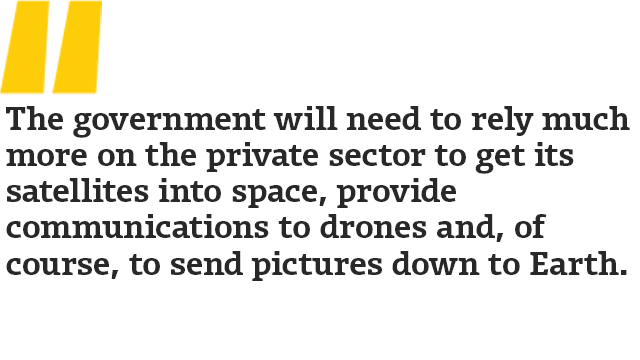 A former intelligence analyst speaking to Defense One questioned whether or not the cost of a satellite like WV justified the value that customers would get it out it, given the rising competition. “I really think the issue is the very complex, extremely expensive, big satellites going up against the Skyboxes of the world,” he said. “The upside will be if the military is heavily tasking US assets on a specific part of the world, another capable satellite could provide coverage of other areas.”

There’s a fundamental shift occurring in the satellite imagery market and that could put more pressure on DigitalGlobe, the analyst said. “The only way [DigitalGlobe] can make money is from the analytical side. Imagery has become a commodity.”

Analytics, as a product, is also growing faster in supply than in demand. Spatial analysis firms like ESRI, based in Redlands, Calif., connect mapmakers around the world through the company’s ArcGIS.com platform, enabling governments, companies, researchers and activists to share lots of geo-specific information and satellite data in realtime. That includes everything from water table maps, to geo-specific histories, to legal boundaries. Skybox, too, is marketing its own satellite analytics service, while academic groups like Harvard’s Satellite Sentinel Project use open-source sat information to predict geopolitical events with a speed and an accuracy that used to be the sole province of governments.

For consumers in the Defense Department and beyond, the competition is a good thing. The government will need to rely much more on the private sector to get its satellites into space, provide communications to drones and, of course, to send pictures down to Earth. And so will the rest of us. The view from 380 miles up just got a lot clearer.

NEXT STORY: Inside Russia's Disinformation Campaign