How to Overcome Challenges of Managing Hybrid, Multicloud Environments
Skip to Content
Get all our news and commentary in your inbox at 6 a.m. ET.
Science & Tech
UK Invites ‘Countries of Concern’ To Shop for Weapons in London

More than a dozen countries on Britain’s list of repressive regimes have descended on DSEI, one of the world’s largest arms fairs.

Some of the world’s most repressive regimes are coming to London to go shopping—for military weapons.

A number of countries with questionable human rights records have come to London for the Defence and Security Equipment International Exhibition (DSEI), one of the world’s largest arms fairs, which begins today (Sept. 15). Of the 61 countries invited, 14 are authoritarian regimes and four are on the British government’s own “ countries of concern ” list. The event is supported by the UK’s ministry of defense and export promotion agency. 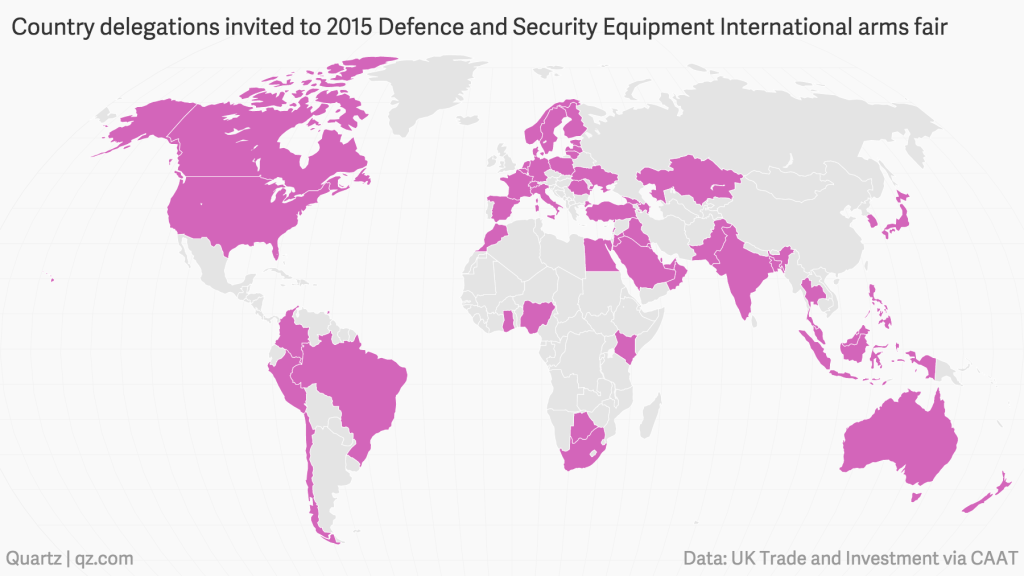 Event organizers expect more than 30,000 attendees at the four-day event, claiming that the show will bring more than £30 million ($46 million) into London’s economy. The fair is divided into different zones, which includes land, air, sea, and unmanned military equipment.

The fair, which is held every other year, is no stranger to controversy . A recent report by The Guardian suggests the British government is defying United Nations requests to reject arms sales to countries where child soldiers are used.

The Campaign Against Arms Trade activist group obtained a list (pdf) of official delegations invited to the fair, citing it as proof of the “hypocrisy at the heart of UK foreign policy.” After all, the British government has publicly raised concerns about human rights in four of the countries sending officials to London to seek arms deals:

In the British government’s latest Human Rights and Democracy report , it commends the positive steps taken by Colombia to improve human rights, but “despite these positive changes, the [Colombian] government was unable to ensure respect for human rights throughout the country due to the continuation of the armed conflict.” From 2008 to 2015, the UK government approved military exports worth £20 million to Colombia .

The British government is particularly concerned with the “situation of women, children and religious minorities” in Iraq, highlighting the “significant and systemic problems with the administration of justice across the country.” The human rights situation has “deteriorated significantly” over the course of 2014, the government says. It approved arms exports worth £55 million to Iraq since 2008.

Last year was “troubling” for human rights in Pakistan, the UK government says . “Severe and wide-ranging violations and abuses continued unabated, with little apparent prospect of improvement,” it notes in a report. Still, the government has approved military export licenses worth more than £150 million to Pakistan since 2008.

Although Saudi Arabia made “incremental improvements” on human rights last year, the British government has particular concerns on “the use of the death penalty, access to justice, women’s rights, and restrictions on freedom of expression.” From 2008 to 2015, Saudi Arabia bought military equipment worth £5.7 billion from UK suppliers.