Federal Agencies Tap Data Visualization to Track and Mitigate the Spread of COVID-19
Skip to Content
Get all our news and commentary in your inbox at 6 a.m. ET.
Science & Tech
Surveillance Cameras Will Soon Divine Your Personality from Eye Movements

Researchers have used artificial intelligence to show that very subtle eye movements, of the sort you might pick up with a camera, can divine aspects of personality much better than random guessing.

It’s another good example of how the wealth of biometric data that humans produce, once digitized and examined at large scale, can reveal hidden aspects of identity in ways that could be a boon to intelligence gathering.

The German and Australian researchers fitted 42 volunteers with eye-tracking headgear, and had them fill out the NEO Five-Factor Inventory, a personality test that measures traits such as neuroticism, extraversion, openness, agreeableness, and conscientiousness.

They then had the subjects go about a normal routine while they quietly collected eye movement data and then used machine learning to categorize the data.

While the program didn’t predict personality perfectly, it did much better than random guessing in areas such as extraversion, agreeableness, and neuroticism, etc. Only in the area of curiosity and exploration did guessing work better. See the chart below for results. 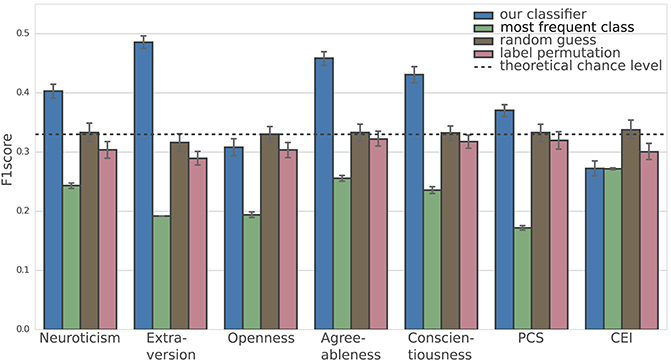 From “Eye Movements During Everyday Behavior Predict Personality Traits.” According to the researchers “Mean F1 scores of 100 instances of our classifier and three baselines per trait. The whiskers indicate the 95% confidence interval around the mean, computed by bootstrapping with 1,000 iterations on the set of 100 F1 scores for each trait. All results were obtained using a cross-validation scheme such that only predictions for unseen participants were used for evaluation. The dashed line shows the theoretical chance level for a classifier that randomly picks one personality score range for each participant, independent of gaze.”

The U.S. military has been looking for ways to use biometrics to authenticate individuals, rather than passwords that can be hacked, and to better collect intelligence on potential subjects in a way that is “non-permissive,” which really just means without the subject’s permission or attention.

But the intelligence community has become concerned about the growing amount of biometric data leakage that’s complicating efforts.