Innovation, Partnership Help Lockheed Martin Take Long-Range Missiles to the Next Level
Skip to Content
Get all our news and commentary in your inbox at 6 a.m. ET.
Ideas
The White House Must Delegate More National Security, Officials Say

To manage the many conflicts happening at once, the White House is urged to loosen its grip. By Gayle Tzemach Lemon

From the Gaza war to Ukraine, Iraq, Syria and the Afghan elections, there are so many conflicts occurring at once that the Obama administration’s tight-gripped method of handling global crises at the top is starting to show cracks.

Former senior Defense Department and State Department officials are saying the growing number of conflicts demanding the attention and leadership of the United States means it is time the White House start delegating more.

“It is hard to handle the volume of what the world is throwing at the U.S. right now if everything has to go up to the most senior levels,” said Michèle Flournoy, CEO of the Center for a New American Security and President Barack Obama’s former under secretary of defense for policy, in an interview with Defense One.

Critics frustrated at the administration’s noninterventionist responses from Syria to Russia have said that the proliferating and worsening conflicts are a sign of America’s shrinking global influence. Others, including Flournoy, take issue with the idea of downsized American leadership, but say that it is simply too much work for this or any White House to handle, and that it is time to roll more power down to the professional diplomats, interagency professionals and cabinet members closest to the front lines of any given issue.

Others who have served on the front lines of U.S. foreign policy in some of the world’s toughest spots echo this view.

“In the past the administration has controlled decision making and when you only have 24 hours in the day, the White House can’t make all the decisions,” says former U.S. Ambassador to Syria Robert Ford, who stepped down earlier this year.

The president himself appeared to address the criticism in an exchange on Friday. “Apparently people have forgotten that America, as the most powerful country on earth, still does not control everything around the world. And so, you know, our diplomatic efforts often take time,” Obama said at a news conference. “That’s the nature of world affairs. It’s not neat, and it’s not smooth.” 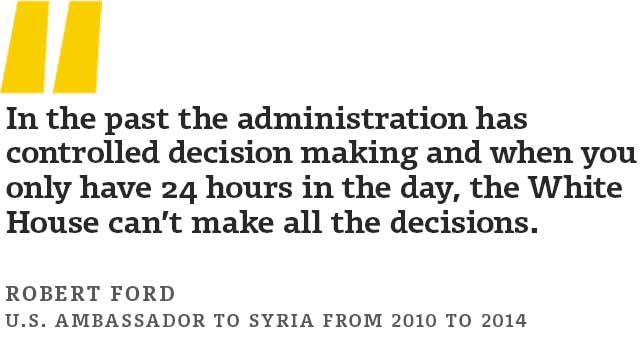 Some who served in the Obama administration, however, say that the White House’s process is slowing internal U.S. deliberations on international affairs issues. And that that in turn slows the timing of public announcements and policy implementation. Former administration officials say that Obama’s White House has taken charge of aspects of foreign policy-making that in other Administrations would have been left to the State Department. Questions that in the past may have been heard, shaped and largely decided at Foggy Bottom now get their final hearing – usually several hearings – at the White House.

On whether or not to cut off aid to Egypt, for example, one former official says, detailed discussions went on “for months” as the White House sought to find the right balance between looking tough on an anti-democratic leadership and not entirely abandoning a longtime ally critical to the region.

In his memoir former Defense Secretary Robert Gates called it “by far the most centralized and controlling in national security of any I had seen” since the Nixon White House.

Ford said the message must be that the president has “the foreign policy team’s back.”

“In the past, on the Syria policy, a very great deal of it, especially as the conflict got nastier and the humanitarian, and especially the security issue became more complicated, the tendency has been to defer more and more questions to the senior leadership, and what that necessarily does is it slows down response time because senior people’s schedules are just so busy,” Ford said. “There has to be a more visible delegation of authority and it has to be a more real delegation so that decisions do not require the top level White House sign off on every single thing.” 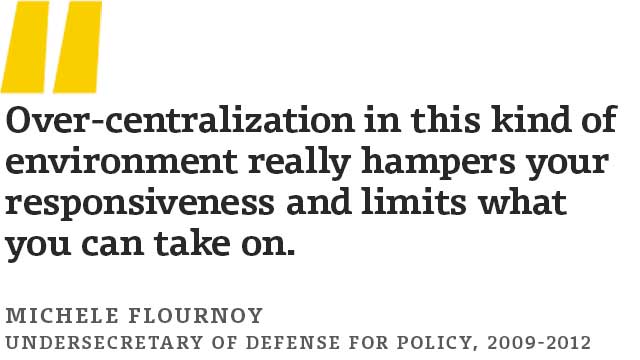 Others who served in the White House say that following a decade of war and the economic crisis, the administration has navigated the barrage of global crises the best it could, given the constraints.

“In the wake of Afghanistan, there was no intervention left – every country just has so much intervention in its intervention account and you spend that down and it takes a while to build it back up again,” said Steven Simon, former National Security Council senior director for Middle Eastern and North African affairs. “The administration has been presiding over a traumatic period in the country’s history, domestically and in foreign policy terms, and I think they are trying to do the best they can under the circumstances. I think generally they have done a good job, but when you do a good job by keeping your ambitions reined in and lashed up to your capacities, you are going to be criticized.”

And as the president alluded to in Friday’s press conference, that capacity question is at the heart of so many current foreign policy issues now demanding America’s attention. After the past decade of two wars, thousands of dead and trillions spent, America is reaching for the “pause” button on its global ambitions while the Pentagon is fighting to do a lot with a lot less and Congress struggles to pass a defense budget.

“Americans no longer have the brash overconfidence that some had going into Iraq in 2003, and that is probably a very good thing, but they also don’t have the same sense of American capacity that perhaps a Cold War generation did,” says Tamara Wittes, former deputy assistant secretary of state for Near Eastern affairs and now the director of the Center for Middle East Policy at Brookings. “When you have as your defining moments 9/11 and the Iraq and Afghanistan wars, maybe you have a different set of experiences and perspective."

NEXT STORY: The Future of VA Reform Can Be Found in Everything This Week’s Bill Left Out