Perspecta's View: Six Steps for DES to Capture Innovation
Skip to Content
Get all our news and commentary in your inbox at 6 a.m. ET.
Ideas
Here's What Has Been Done To Improve Military Relations With China

Recent progress and cooperation between U.S. and Chinese navies is encouraging. By Vice Adm. Robert Thomas 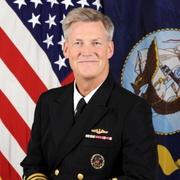 The U.S. 7th Fleet operates 60 to 80 ships and submarines, 140 aircraft and includes more than 40,000 personnel in an area stretching from the International Date Line to the India/Pakistan border. In addition to the U.S. and China, the region includes 34 other maritime nations. Working with all these nations to maintain peace and prosperity lies at the heart of our strategic rebalance to the Indo-Asia-Pacific. The rebalance presents an opportunity for the 7th Fleet and PLA(N) to build a relationship based on mutual respect that will solidify the stability and security for everyone in the region.

We have recently seen several tangible examples of improved cooperation between our two militaries. The PLA(N) participated in RIMPAC 2014; a major milestone and first ever for the world’s largest maritime exercise. The embarkation of U.S. Navy officers on PLA(N) combatants during RIMPAC is an exceptional example of advancements in our relationship.

Pacific Fleet Commander Adm. Harry Harris visited China in April, where the PLA(N) hosted the Western Pacific Naval Symposium and adopted the Code for Unplanned Encounters at Sea (CUES). CUES is another example of increased cooperation, providing a standardized set of preapproved communications that ship and aircraft commanders can use without higher headquarters approval. CUES helps avoid miscalculation during unplanned encounters by empowering and indeed expecting unit commanders to communicate without first asking permission from higher authority.

In August, I visited the headquarters of the PLA(N) North Sea Fleet in Qingdao, along with the Fleet flagship USS Blue Ridge and nearly 1,000 U.S. Sailors. While in Qingdao, North Sea Fleet Commander Rear Adm. Yuan Yubai and I had a constructive dialogue about the use of CUES and potential opportunities for future exercises. We also conducted a joint leadership discussion with 50 officers from 7th Fleet and the North Sea Fleet. At the tactical level, USS Blue Ridge and guided-missile frigate CNS Yancheng (FFG 546) teamed up for a search and rescue exercise.

The PLA(N) and PLAAF are now global brands and our desire is for them to increasingly contribute to security and stability operations. Recent contributions are exemplified by their participation in the search effort for MH370 and their involvement in maritime security with respect to Syrian chemical munitions destruction operations.

There is, however, still some work to do. Although we have recently seen an encouraging decrease in unsafe air and at-sea intercepts, we continue to see a few instances of unprofessional behavior involving PLA(N), PLAAF and Chinese Coast Guard assets. We must convince all concerned that access to international waters and airspace should be a matter of routine. All nations benefit from an adherence to international norms, standards, rules and laws.

What’s next? Our goal is clear: we want to work with the PLA(N) and PLAAF to ensure their efforts contribute to regional stability and that they act as a proponent of the rule of law in the international system. To this end, increased cooperation between the U.S. 7th Fleet and the PLA(N) will benefit all nations in the Indo-Asia-Pacific region.

NEXT STORY: What Congress Can Do To Restore the Balance of Power With China