Federal Agencies Tap Data Visualization to Track and Mitigate the Spread of COVID-19
Skip to Content
Get all our news and commentary in your inbox at 6 a.m. ET.
Ideas
Weapons of the Syrian War: Airpower (Non-Syrian)

By May 2016, the counter-ISIS coalition had dropped more than 41,500 bombs, leading the Pentagon to borrow from stockpiles in other regions.

By May 2016, the U.S.-led counter-ISIS coalition had dropped more than 41,500 bombs, leading the Pentagon to borrow from stockpiles in other regions.

U.S. aircraft that have dropped munitions on ISIS include: 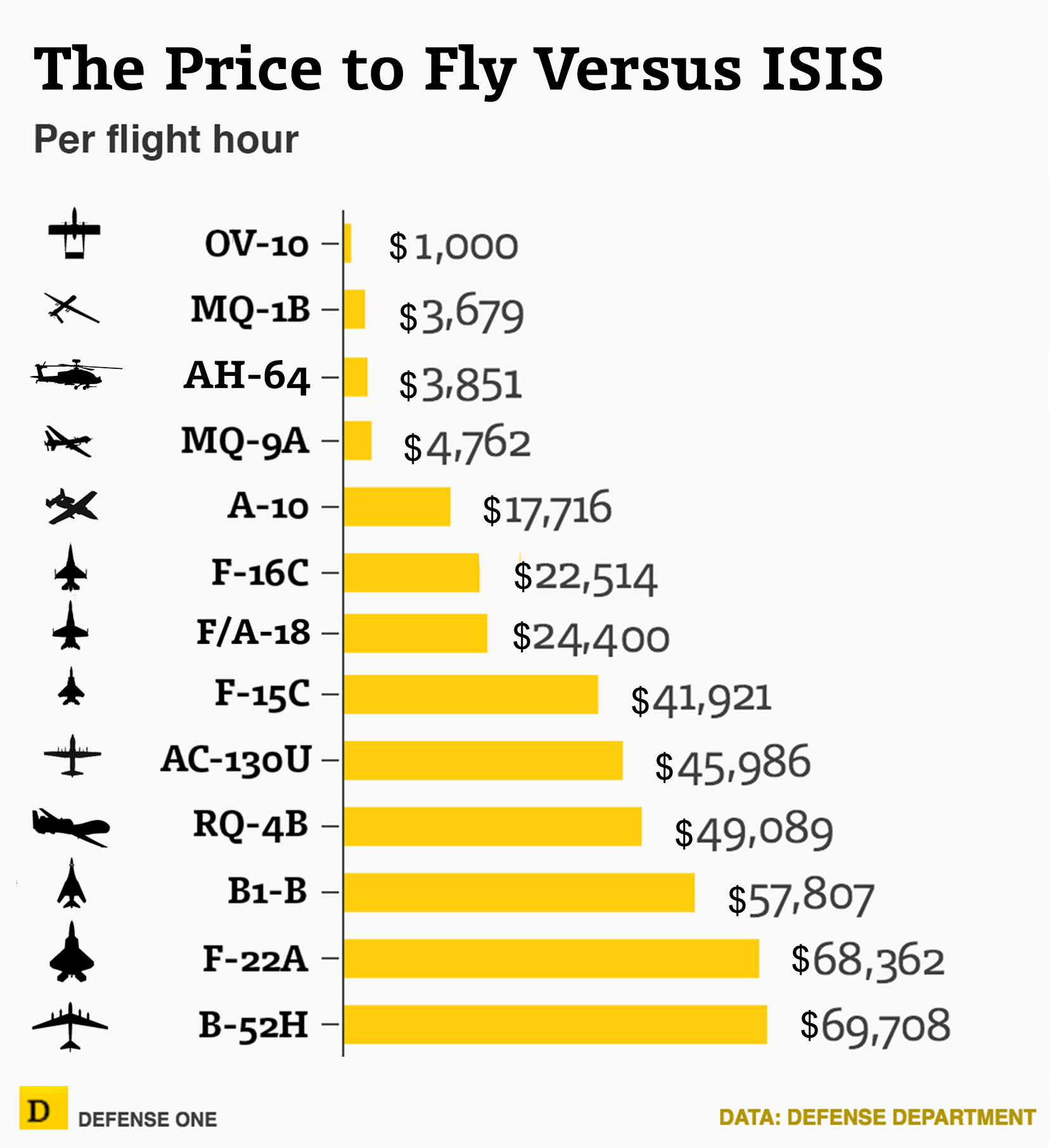 How much does an airstrike cost? "The cheapest possible strike could cost roughly $50,000," but that's just one jet, budgetary expert Todd Harrison, now of the Center for Strategic and International Studies, said in a 2014 interview with Foreign Policy .

Most strikes include a combination of aircraft. Consider, for example, a recent strike on an alleged convoy of ISIS fighters fleeing Fallujah: that series of strikes included 29 different aircraft.

And the munitions they're dropping:

The U.S. military has built up an enormous catalog of counter-ISIS airstrike imagery and videos. Other coalition nations, on the other hand, have been more reticent.

During the air campaign's first 10 months, ISIS continued to gain territory . But in the next eight months, U.S. military officials said, the group lost up to 45 percent of its land.

The U.S. says it has killed more than 26,000 ISIS fighters since its air campaign began in August 2014. (This claim has attracted a fair amount of criticism from experts, who note, for example, the Pentagon's June estimate that the Islamic State still had 19,000 to 25,000 fighters.) If ISIS has made one repeated demand since it executed U.S. journalist James Foley in August 2014, it has been to stop the airstrikes on its fighters. Also worth noting: a halt to the airstrikes has been a demand of the terrorists behind attacks in Brussels; Paris; Garland, Texas; and Orlando. 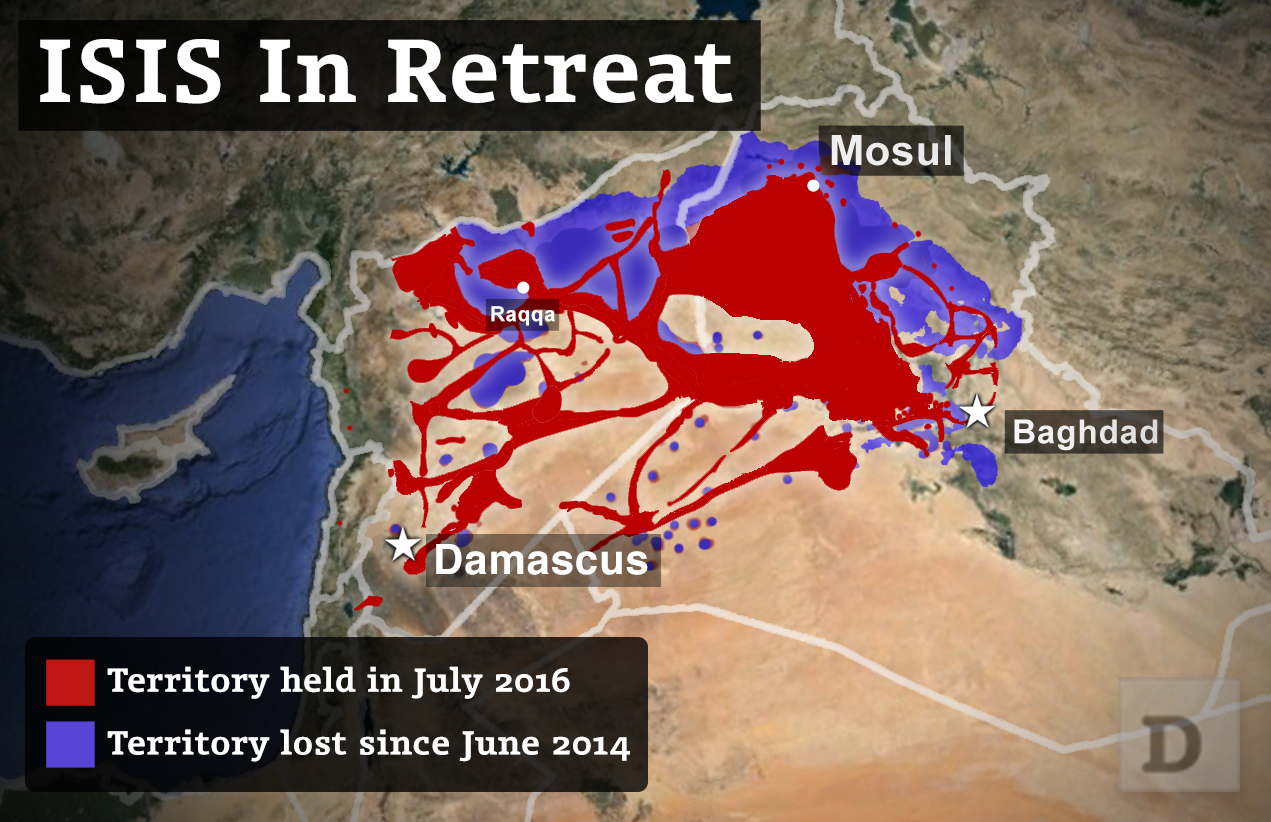 As for the Russian impact on the conflict, here's an excerpt from a scathing report by the Atlantic Council:

Russia carried out its air strikes with scant regard for the rules of war: Open-source footage shows the repeated use of banned cluster munitions, and strikes on targets including mosques, hospitals, and water treatment plants...
Russia’s military campaign allowed Assad’s forces to retake lost ground, a task they did with great brutality and immense human suffering. It barely dented the ISIS terrorist group, whose recent territorial losses have largely come at the hands of Kurdish militias backed by a US-led coalition. Far from shortening the war, it exacerbated it—and in so doing, it sent yet more waves of refugees flooding into Turkey and Europe. 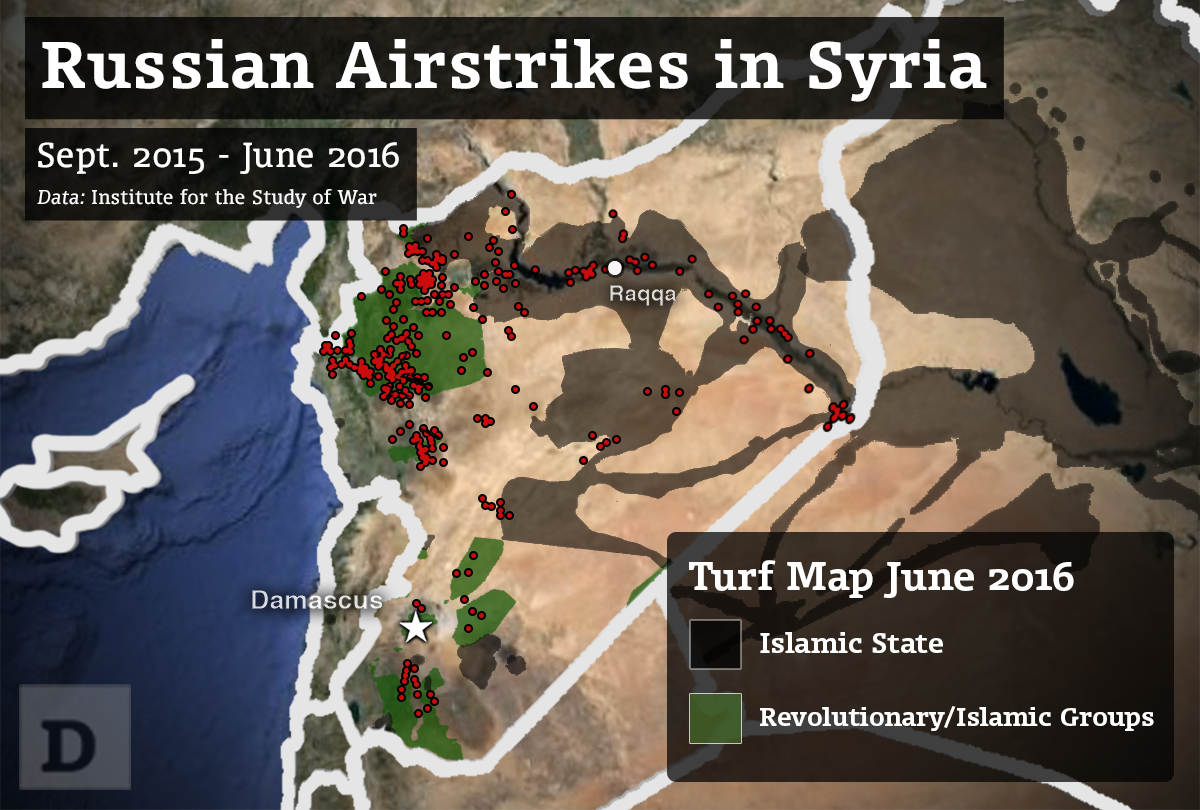 How many Syrian civilians have died in airstrikes?

Since January 2015, the U.S. military has used intelligence-driven strikes to target and kill "more than 120 high-value individuals in ISIL's attack network," coalition spokesman Col. Steve Warren said in May 2016.

Note: This list is likely missing some names; the U.S. military does not always release the names of non-"senior leaders" killed in airstrikes.

NEXT STORY: Weapons of the Syrian War: Cruise Missiles