Innovation, Partnership Help Lockheed Martin Take Long-Range Missiles to the Next Level
Skip to Content
Get all our news and commentary in your inbox at 6 a.m. ET.
Ideas
Mapped: America's Collective Defense Agreements

The United States has agreements to come to the defense of more than 50 other nations.

President Donald Trump begins his term as an outsider distrustful of globalization, wary of overseas commitments, and determined to deliver on a promise to restore America's sovereignty. His first 90 days find him in a particularly unique place for a U.S. president—having spent months suggesting some of America's defense commitments may be obsolete, while knocking allies from Asia to the Middle East and throughout NATO for not paying the U.S. enough for security.

Now two weeks in and 18 executive orders down, the Trump administration is decidedly charting a new path for the country. And it's doing so with a new and, at times, puzzling approach toward diplomacy. (Consider the recent messaging uproar from the president's phone calls with the leaders of Australia and Mexico.) Aside from occasional presidential tweets about World War III, one noteworthy draft executive order leaked to the New York Times in late January entitled “Moratorium on New Multilateral Treaties.” It could offer a window in the future of White House diplomacy. As written, the order would apply "only to multilateral treaties that are not 'directly related to national security, extradition or international trade.'" Notes the Times , "it is unclear what falls outside these restrictions." 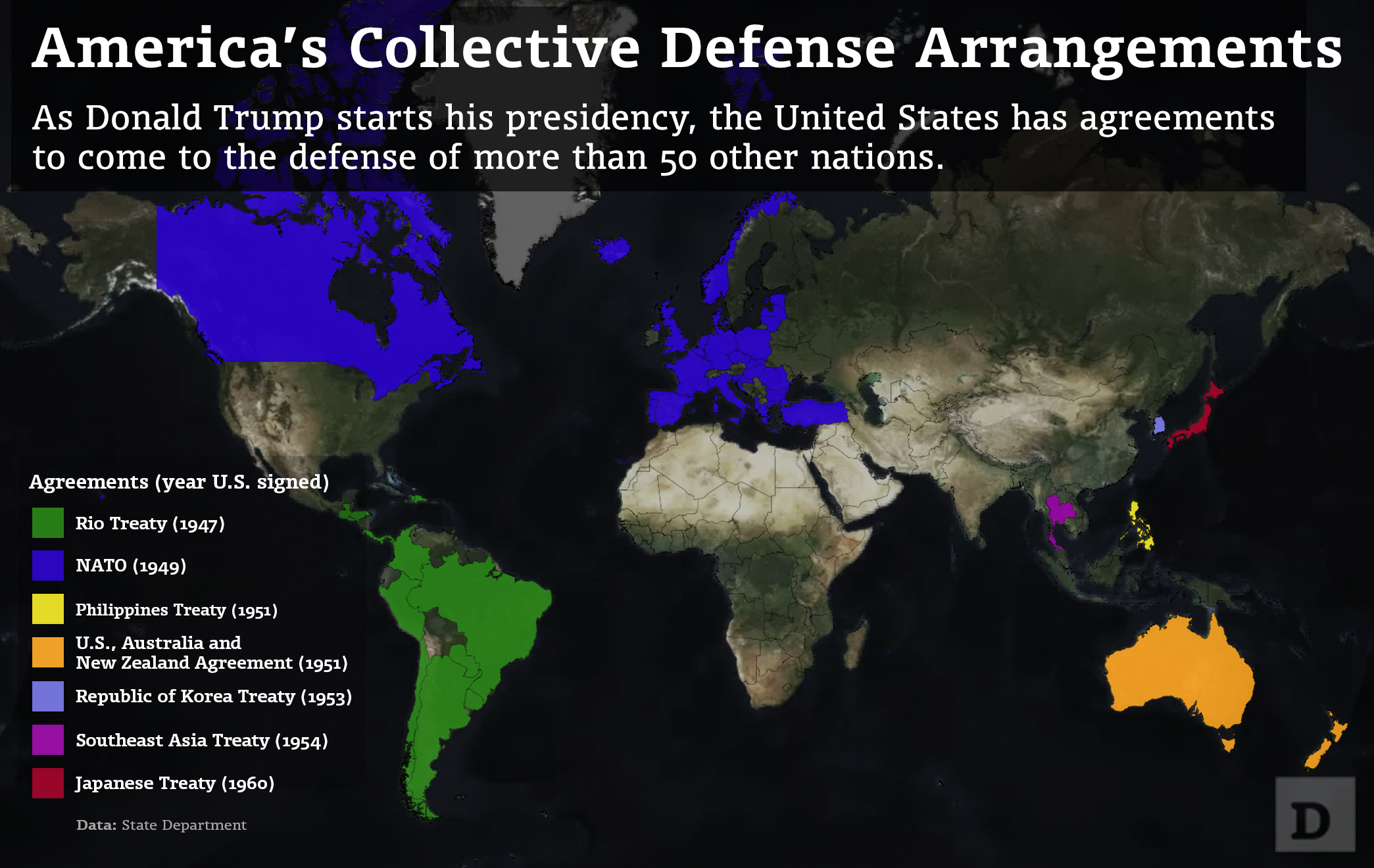 To America's allies and fellow treaty signatories from Europe to South America , Trump's approach "stands in stark contrast to the dominant strain of internationalism that has marked U.S. foreign policy since the days of Franklin Roosevelt and Harry Truman," Steven Patrick of the Council on Foreign Relations wrote in November. (Less than two months later, House lawmakers introduced a UN membership-ending bill called the " American Sovereignty Restoration Act of 2017 ," among the first submitted to the 115th Congress in early January.) Since the end of World War II, America's consistency had been something that "long reassured partners and allies," said Patrick.

Defense Secretary James Mattis wasted little time in his first days on the job, traveling for four days to visit with counterparts from Japan and South Korea, allies with a careful eye on nuclear-armed North Korea. They are among the most recent to be added to America's list of collective defense arrangements, pictured below. Not all have kept their original members—NATO expanded, Rio signatories declined—but all remain active, according to the State Department.

The nations that are allied with the U.S. have 6 million people in total military manpower and account for more than 60 percent of global defense spending (more than $1 trillion), according to a 2017 report from the conservative think tank Heritage Foundation. See the map below for troop counts of each U.S. ally listed under the State Department’s collective defense agreements.

Find those troop counts below.

Size of other significant militaries

Agreement between the U.S., Australia and New Zealand