Trump's new call for allies to spend 4 percent of their GDPs on defense makes no sense. Even America shouldn't do that.

Donald Trump makes everyone else look mature. So it’s easy to forget that, sometimes, he’s not the only one who’s wrong. His establishment critics are too.

Take NATO, whose annual summit Trump threatened to derail because he publicly upbraided America’s allies for supposedly not spending enough on their militaries. (After first berating America’s allies for not spending 2 percent of GDP on defense, Trump on Wednesday demanded they spend 4 percent.) Some Democratic politicians and liberal journalists have responded to that line of thinking with what sounds like a thoughtful, measured critique: Yes, America’s partners should increase defense spending, but it’s not worth blowing up NATO make them do it. Earlier this month, four Democratic senators wrote to Trump asking that, “In addition to urging NATO allies to meet their commitments to spend 2% of GDP on defense … you make a strong statement of support for the democratic nations that make up the alliance.” In recent days, The Washington Post has editorialized that, “Mr. Trump makes a valid point about defense spending.” The New York Times has concurred that, “Many allies can do more to reach the target level of spending 2 percent of their annual G.D.P. on defense”—even as both newspapers warn that Trump risks harming an organization that has served America well.

The Democrats, The Post and The Times are wrong: America’s NATO partners don’t need to spend 2 percent of GDP on defense, let alone 4 percent. And the fact that some of America’s most prominent progressive politicians and journalists think they should underscores just how detached liberal foreign policy has become from the values liberals supposedly prize.

For starters, the 2 percent figure is arbitrary. It doesn’t measure how much a country actually contributes to the common defense. As The Washington Post has noted, Greece meets the 2-percent threshold because it spends a lot of money on military pensions and on weapons systems aimed at deterring its fellow NATO member, Turkey—neither of which makes America and Europe safer. Rachel Rizzo, an expert on trans-Atlantic security at the Center for New American Security, told me Germany could reach the 2-percent threshold by giving everyone in its Ministry of Defense a raise. That wouldn’t do much to enhance security either.

But the larger problem with demanding that America’s NATO partners spend 2 percent—or 4 percent—on defense is that it assumes Europe’s biggest threats are military. The 2 percent figure dates from 2014, when the Obama administration pushed through a statement pledging that NATO members “aim to move towards the 2% guideline within a decade.” Back then, Russia had just annexed Crimea. And when asked why NATO countries should spend 2 percent, experts often cite the fear that Russia—having invaded Ukraine—might invade NATO countries like Estonia, Lithuania, and Latvia.

But that’s extremely unlikely. In his almost 20 years in power, Vladimir Putin has intervened militarily in Ukraine and Georgia, countries that are not NATO members, likely in part because he knew doing so would not risk war with the United States and its major allies. But since NATO members are bound to defend one another, invading Estonia, Lithuania, and Latvia—which host troops from Britain, France, Germany, and Canada on their soil—would risk exactly that. When Putin contemplates such a conflict, he’s surely aware that NATO spends more than 13 times as much as Russia on defense. Even if you didn’t count U.S. spending, the other members combined spend more than four times as much as Russia. And that’s without most of them reaching the 2 percent of GDP goal.

The threat of Russia actually invading the Baltic states is very small. And Russia poses basically zero military threat to larger NATO members like France, Germany, Italy, and Spain. The far larger threat to Europe is ideological. It’s rising authoritarianism. Poland is on track to meet the 2-percent threshold even as it eviscerates the independence of its supreme court. Russia exacerbates that ideological threat by supporting illiberal political parties, but the real driver of European authoritarian impulses is mass migration. In recent years, war, state collapse, and climate change have sent millions streaming toward Europe from North Africa, sub-Saharan Africa, and the greater Middle East. And Europe’s failure to effectively handle these flows has sparked a hyper-nationalist response that in many countries threatens liberal democracy.

NATO runs small anti-people-smuggling initiatives in the Mediterranean and Aegean Seas. But the migration crisis can’t be solved with planes and tanks. Europe can best respond to it by increasing foreign aid and intensifying diplomatic efforts so states on its periphery don’t collapse, and, when migrants do make it to Europe’s shores, by investing in programs that help them better integrate.

Many Europeans recognize that. Last August, when Chancellor Angela Merkel pushed to boost German defense spending to 2 percent of GDP, her left-leaning coalition partners, the Social Democratic Party, responded that the money would be better spent on humanitarian assistance and diplomacy. They were right. You’d think American liberals—many of whom have criticized Trump for slashing spending on the State Department—would recognize that.

What American liberals should be saying is not that Germany’s defense spending is too low but that America’s is too high. Plenty of Democratic voters, after all, desperately want the kind of welfare state that Germans already have. They want to check in to the hospital without risking bankruptcy and to attend college without going into debt. Higher defense spending means less money to achieve those goals. Perhaps it’s no surprise that Democratic leaders in Congress—who enthusiastically backedDonald Trump’s military buildup earlier this year—are now demanding a similar buildup in Europe. But, in doing so, they’re not highlighting a problem with Europe. They’re highlighting a problem with themselves. 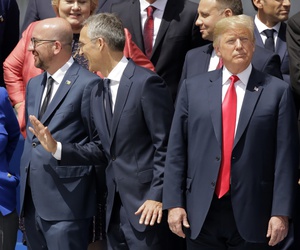 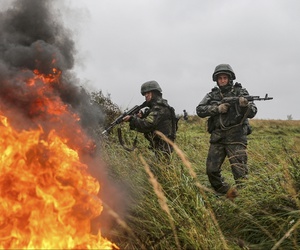 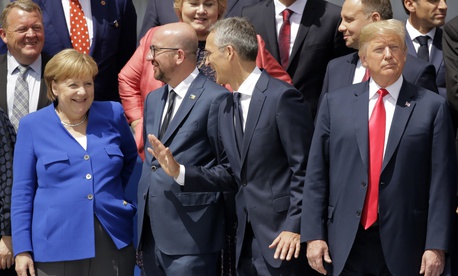