How Ethical Hacking Can Make DOD’s Weapon Systems More Secure
Skip to Content
Get all our news and commentary in your inbox at 6 a.m. ET.
Science & Tech
Upgrades Will Let the Navy’s LCS Operate in More Dangerous Waters

The Pentagon approves a plan to upgrade the Navy’s littoral combat ships with more firepower and defensive equipment, but is it enough? By Marcus Weisgerber and Patrick Tucker

By Marcus Weisgerber and Patrick Tucker

The Navy plans to beef up the firepower and defenses of its littoral combat ship fleet in the coming years, allowing the ships to operate in more dangerous waters.

Defense Secretary Chuck Hagel on Thursday signed off on the Navy’s plan to buy a total of 52 ships, 20 more than currently planned. In February, Hagel told the Navy to come up with a ship more survivable than the current LCS, a type of ship that has faced criticism for not packing enough weapons and self-defense systems. The Navy determined a modified version of the LCS, rather than a new design, is the answer.

“This ship will meet that need,” Adm. Jonathan Greenert, chief of naval operations, said. Greenert and Sean Stackley, the Navy acquisition executive, briefed reporters on the plan Thursday evening at the Pentagon.

The Navy is already buying two types of Littoral Combat Ships, the Lockheed Martin-built Freedom Class and the Austal USA-made Independence Class. The upgraded ships, in concert with onboard MH-60 helicopters, will have an “extremely lethal surface warfare configuration,” Stackley said.

The upgraded LCS – called the small surface combatant, or SSC – will get a host of new equipment allowing it to fight other ships and submarines. The new gadgets include an improved 3D air surveillance radar, upgraded self defenses, over-the-horizon missiles, improved electronic warfare, torpedo defense and countermeasures, more armor and bigger guns.

“One of the beauties of the modular design feature is that those mission packages are going to continue to evolve as the threat evolves,” Stackley said. “Now you will continue to have the ability to upgrade [and] update your capabilities to keep pace with the threat without having to bring the ship in to port … and build it back up in a major overhaul.”

The Navy hasn’t settled on contractors for the new equipment and plans to hold competitions for individual systems. Lockheed and Austal will install the equipment on their respective ships. Per Hagel’s memo, the Navy must develop an acquisition strategy in the coming months for these new ships as well as retrofitting the existing LCS fleet.

The Navy expects the new upgrades to cost between $60 million and $75 million per ship. Each ship costs about $360 million, but that price does not include millions of dollars more in government equipment installed on the vessels, according to Navy officials. The Navy will have to take weight off the each ship to accommodate some of the new systems and defenses, Stackley said. 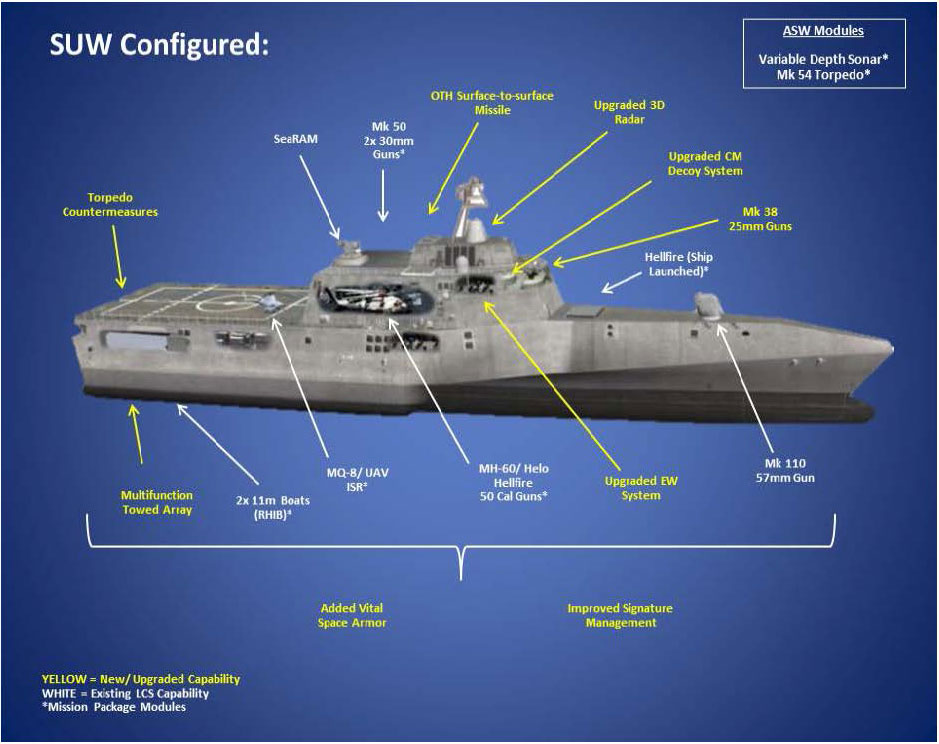 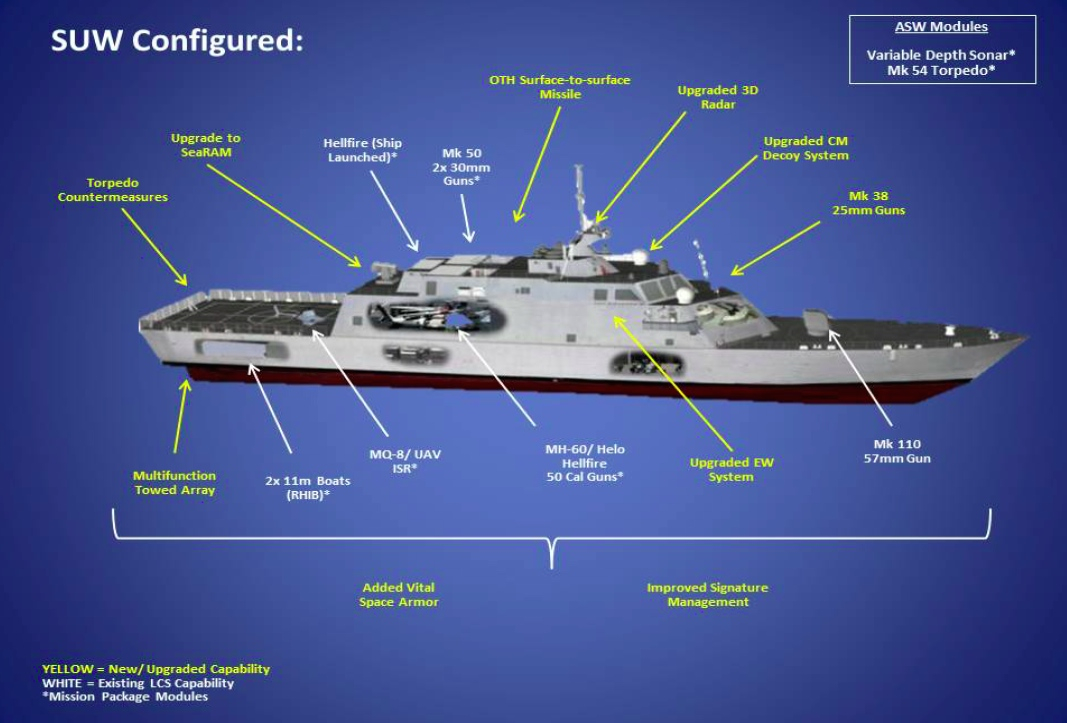 But the ship will not get as much firepower as some had hoped, such as a missile vertical launching system, which is used on guided-missile destroyers and cruisers. The Navy had to strike a delicate balance of cost and capability when determining the types of upgrades and improvements to the LCS, Navy officials said.

The Navy’s plan also did not decide on a single LCS ship for the 20 new ships that are now part of the program. The Navy plans to compete the program buying both Freedom and Independence ships, as it has thus far throughout the project.

In a November report, Bryan Clark, an analyst with the Center for Strategic and Budgetary Assessments, said the Navy should modify one of its LCS variants “to leverage the learning curve already established with those ships and enable the new ship to promptly reach the fleet.”

In November 2001, the Pentagon said that they wanted a new ship capable of a variety of missions in shallow water (littoral) environments. The specifications for that ship were borne out of analysis, war games and fleet experiments that took place over the course of the preceding decade. The result was the Littoral Combat Ship or LCS program: two hulls, the Freedom and the Independence-class, both with very specific assets and deficiencies. The primary assets were speed and flexibility of form. The two frames could be modified for a variety of missions, from submarine hunting to mine clearing to escorting larger, more valuable ships.

The ship’s deficiencies were capability and lethality, and, according to the program’s many critics, that was true across the various mission package kits that came with it. The LCS had very limited anti-air missiles in the Raytheon SeaRAM, which was much smaller than other surface to air missile systems. The ship had no long-range missile.

It was a fast but toothless ship, suited for catching small craft (or perhaps chasing down drug boats). In a faceoff with a larger enemy, its only hope for survival was the avoidance of detection, or at least the ability to dodge a direct hit.

“LCS’s survivability would focus primarily on susceptibility—that is, its ability to avoid a hit altogether,” Robert Work, then an undersecretary for the Navy, explained in his seminal paper on the subject, The Littoral Combat Ship: How We Got Here, and Why.

But the lack of missile power makes the LCS of today a poor match against an enemy like the Chinese, according to many scholars. It’s particularly vulnerable to the Chinese ASCM missile.

Clark, the naval analyst, in his report, spells out exactly why the ship’s ASCM vulnerability is a fatal one, especially in circumstances where an LCS is tasked with defending a larger ship.

“Given the LCS’s short-range missiles, a defended ship would have to operate too close to the LCS to permit effective maneuvering and the LCS would have to be positioned between the incoming missile and the escorted ship or directly in front of or behind the escorted ship. To ensure the incoming ASCM is intercepted, two RAM would likely be shot at each incoming ASCM. This would result in the LCS’s magazine of RAMs being exhausted after ten ASCM attacks. In the LCS’s envisioned littoral operating environment, more ASCM attacks would likely occur before the ship could reload its RAM magazine.”

The avoidance of detection, the LCS’s only real survival capability, will become more difficult thanks to improvements in ship locating technologies. Frank Hoffman, a former deputy director of the Navy’s Office of Program Appraisal, told Defense One that enhancements to Chinese ship detection capabilities would render the LCS a very, very targetable ship.

“If the Chinese obtain surveillance and tracking parity, which I think they can, and can launch land-based bombers, ballistic missiles and anti-ship cruise missiles in numbers, then I don’t want to be on a gray painted ship in the East China Sea, certainly not in a 100,000 ton steel target,” he said “The LCS program can be made more lethal, and I think the [Chief of Naval Operations] has got that problem in hand.”

Navy leaders at the Pentagon on Thursday proposed upgrades that could mitigate those problems. They include an upgraded SeaRAM (or an upgrade to SeaRAM for the Freedom-class) torpedo countermeasures, multifunction towed array sonar (sonar towed behind the ship), extra, strategically placed armor, upgraded 3D radar, a so-called “over the horizon” surface to surface missiles, an upgraded decoy system, 25 mm guns (to support existing cannons.) But most importantly, the new plans call for an upgraded electronic warfare system or EW system to assist with detection avoidance as well as dodging missiles.

Greenert said the Improved EW system would resemble a “light” version of the Navy’s Surface Electronic Warfare Improvement Program (SEWIP). SEWIP “performs the mission of early detection, signal analysis, threat warning and protection from anti-ship missiles,” according to the Navy. “It’s the idea of opening the [aperture frequency] and expanding the library of threats,” said Greenert.

Stackley named the multifunction towed array sonar as the most important innovation on display in the upgrade, calling it “a capability that doesn’t exist elsewhere.” It’s a capability that will be especially useful against submarines.

But how will it hold against missiles?

In response to the unveiled designs, Hoffman said the new specifications represent “an extremely balanced approach” but that, without knowing the full range of the missile system, he couldn’t give the proposal his full support. “I think lethality and survivability are inter-related and if the surface to surface attack missile does not provide sufficient standoff, then we have not adequately addressed the two major shortfalls of the current program, and the [Senate Armed Service Committee] will not support this proposal.”

NEXT STORY: These Were China's Top 10 Cyber Security Threats in 2014