Missiles streak across the Damascus skyline as the U.S. launches an attack on Syria targeting different parts of the capital, early Saturday, April 14, 2018.

The president said deterring the use of chemical weapons is "a vital national security interest” of the United States."

This breaking story has been updated. More updates will be come as new information becomes available.

President Donald Trump sent the United States military, with help from French and UK forces, to attack a trio of Syrian targets early Saturday morning, local time, in retaliation for the regime’s use of chemical weapons against its own civilians last Saturday.

“I ordered precision strikes’” on targets associated with the chemical weapons capabilities of Bashar al-Assad, Trump said in televised remarks from the White House Friday night.

“We chose these particular targets to mitigate the risks of civilian casualties,” Chairman of the Joint Chiefs Gen. Joseph Dunford said. “We chose these targets because they were specifically associated with the Syrian chemical program.”

Mattis said said the strikes were not “directed at the Syrian regime” itself, adding that “Clearly the Assad regime did not get the message last year,” and “we urge responsible nations to condemn the Assad regime.”

Dunford said Syrian forces fired surface-to-air-missiles, but U.S. officials said there were no reported losses of American or coalition aircraft that took part in the strikes.

“Right now, we have no additional attacks planned,” Mattis said. “Right now, this is a one-time shot,” he said. “I believe that it sent a very strong message to dissuade [Assad], to deter him, from doing it again.”

Dunford said that U.S. officials had used the deconfliction line to warn their Russian counterparts that missiles would soon be flying through Syrian airspace, but did not discuss specific targets.

The strike came nine days after Trump told reporters that he would soon withdraw U.S. troops from Syria, surprising several of the leaders of the American intervention, before later walking that back. The attack occurred two days after Trump, in a tweet, warned Russia that a missile attack was coming, drawing a response from Russia that it would shoot down any such missiles.

In his remarks on Friday, Trump said deterring chemical weapons is “a vital national security interest of the United States,” and sharply criticized Russia and Iran for supporting Assad’s regime.

“These are not the actions of a man; they are crimes of a monster,” he said. “To Iran and Russia, I ask, what kind of nation wants to be associated with the mass murder of innocent men, women, and children. The nations of the world will be judged by the friends they keep.”

The remarks rank among Trump’s harshest criticism of Russia since taking office.

“Russia must decide if it will continue down this dark path or join with civilized nations,” he said.

British Prime Minister Theresa May confirmed she had ordered UK forces to join the strikes. “A significant body of information including intelligence indicates the Syrian Regime is responsible for this latest attack. This persistent pattern of behaviour must be stopped,” she said, in a statement.

“This is not about intervening in a civil war. It is not about regime change. It is about a limited and targeted strike that does not further escalate tensions in the region and that does everything possible to prevent civilian casualties.

For May, the attack has added meaning: “This is the first time as prime minister that I have had to take the decision to commit our armed forces in combat – and it is not a decision I have taken lightly,” she said. “I have done so because I judge this action to be in Britain’s national interest. We cannot allow the use of chemical weapons to become normalised – within Syria, on the streets of the UK, or anywhere else in our world. We would have preferred an alternative path. But on this occasion there is none.”

Added NATO Secretary-General Jens Stoltenberg: “I support the actions taken by the US, the UK and France against the Syrian regime’s chemical weapons facilities and capabilities. This will reduce the regime’s ability to further attack the people of Syria with chemical weapons.”

In his announcement, Trump made a point to say the United States was not the solution for the Middle East — a nod, perhaps, to the American public’s wariness of long-term military interventions. “The U.S. will be a partner and a friend, but the fate of the region lies in its own people,” he said.

The multinational effort stands in contrast to the U.S.-only retaliatory strike carried out last April in response to a similar chemical attack by Syrian government forces on Khan Shaykhun in Syria’s Idlib Governorate.

Republican lawmakers largely endorsed the strikes on Friday night, with Senate Majority Whip John Cornyn tweeting “Good” in response to Trump’s statement that “We are prepared to sustain this response until the Syrian regime stops its use of prohibited chemical agents.”

Rep. Kevin McCarthy, House majority leader, whom Speaker Paul Ryan, R-Wisc., on Friday endorsed to succeed him, tweeted: “The barbarism from the Assad regime will not be tolerated. America and its allies are together to deliver the consequences from such heinous action.”

The non-profit Turkish news outlet Suriye Gündemi has a good map showing the approximate distribution of the various forces in Syria.

The strikes come 15 days after the president — apparently going off-script at an unrelated event — said that U.S. troops in Syria would be coming home “very soon.” Days later, he told reporters at the White House that he intended to pull troops out of the war — at the exact moment that several of the top U.S. officials in charge of the American intervention were saying just the opposite at at a nearby Washington think tank.

The attack that drew Friday’s retaliation took place last Saturday, April 7, when unusual objects were reported falling from the skies over the Damascus suburb of Douma. Over the next few hours, about 500 people reported symptoms consistent with a chemical attack, including burning eyes, breathing problems and white foam coming from their mouths and nostrils. Some 70 people have died so far.

It wasn’t immediately clear that the deaths and injuries were caused by a chemical attack. “The state news media in Syria denied that the government had used chemical weapons, and accused a rebel group of fabricating the videos to drum up international support. Russia and Iran, Syria’s allies, have also denied that Mr. Assad used chemical weapons. The United States and its allies believe chemical weapons were used,” the New York Times reported Wednesday. “The United Nations has not determined responsibility for the attack. Rival resolutions from the United States and Russia on how to investigate the attack were defeated on Tuesday.”

Last year’s retaliatory attack came 72 hours after the chemical attack, and consisted of a salvo of 59 cruise missiles at Shayrat Airbase, a Syrian airfield that U.S. officials said was the base used by the Syrian aircraft that dropped the chemical weapons. 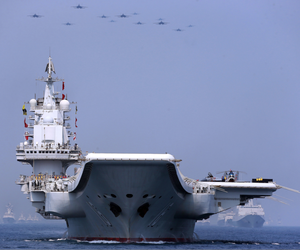 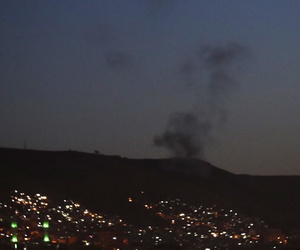 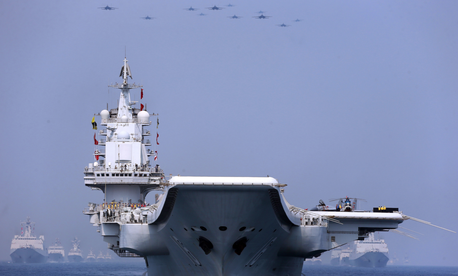 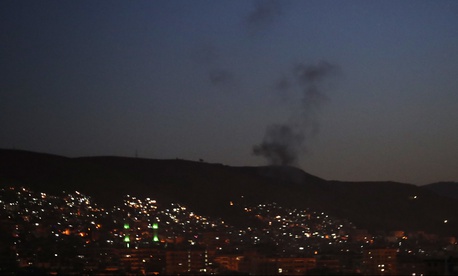