How Ethical Hacking Can Make DOD’s Weapon Systems More Secure
Skip to Content
Get all our news and commentary in your inbox at 6 a.m. ET.
Ideas
The Unraveling of Kerry’s Bid for Mideast Peace

Will the secretary of state's "strategic patience" with Israeli and Palestinian leaders pay off? By David Rohde

To both critics and supporters, it was "classic" John Kerry. A day before the formal end of Kerry's quixotic, nine-month effort to broker an Israeli-Palestinian peace agreement, the secretary of state was surreptitiously taped making a comment that provoked a political firestorm in Washington.

In a closed meeting with foreign-policy experts, Kerry said that if there is no two-state solution soon, Israel risked becoming "an apartheid state." Kerry was apparently referring to an argument made by liberal Israelis and European critics that if two states are not created and current demographic trends continue, Palestinians will outnumber Israelis.

"A unitary state winds up either being an apartheid state with second-class citizens," Kerry said last Friday, according to The Daily Beast . "Or it ends up being a state that destroys the capacity of Israel to be a Jewish state."

The comment played into longtime caricatures of the former senator. To skeptics, it was Kerry, the egotistical former presidential candidate, committing yet another gaffe. After months of pursuing an ambitious Middle East peace settlement, Kerry was blaming Israel for his own failure. Senator Barbara Boxer, a Democrat from California, called Kerry's statement "nonsensical and ridiculous." Senator Ted Cruz, a Texas Republican, called for Kerry to resign.

To Kerry's defenders, it was a high-risk, high-reward secretary of state speaking the truth about the need for a two-state solution. On Monday night, Kerry said in a statement that he never said, or suggested, that Israel was currently an apartheid state. And on Tuesday, his aides stood by the remarks, which they said was nothing more than Kerry reiterating a warning voiced by liberal Israeli politicians such as Tzipi Livni, Ehud Olmert, and Ehud Barak for years.

"He said what Livni, Olmert, and Barak all said," a senior State Department official close to Kerry said on Tuesday. And instead of admitting failure, aides said Kerry would continue his Mideast negotiations after a pause of several months. After an initial domestic political boost, the aide predicted, Israeli and Palestinian officials would be forced back to the table by the long-term need for a two-state solution. "It's a matter of time before they all come back," the aide predicted, "and want to have negotiations."

Bravado aside, the stakes for Kerry are vast. He has devoted more time and prestige to the Israeli-Palestinian peace talks than to any other foreign-policy issue during his first year as secretary of state. 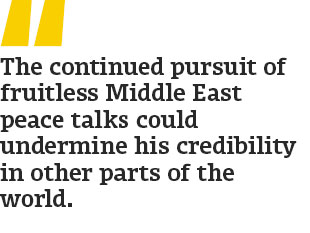 Foreign-policy experts say Kerry may be stretching himself too thin. In his first year, he has traveled more than any previous secretary of state and thrown himself at multiple complex foreign-policy issues, from Syria to Russia to South Sudan. George Perkovich, a nonproliferation expert at the Carnegie Endowment in Washington, said Kerry's work ethic was admirable but he needs to narrow his focus and rely more on others.

"You have to admire his willingness to risk his prestige and reputation in taking on the hardest challenges," Perkovich said. "At some point, you have to make strategic priorities and realize that solving big problems requires real sustained campaigns and mobilizing parts of the government. You can't just get on a plane and do it yourself."

The continued pursuit of fruitless Middle East peace talks could undermine his credibility in other parts of the world and eventually even could scuttle his tenure as secretary, experts say. Aaron David Miller, a former U.S. State Department peace negotiator now at the Wilson Center in Washington, said a separate danger was that the Israelis and Palestinians will use Kerry. He said both sides appear unwilling to make the difficult compromises needed for a final settlement. But they were happy to drag on the talks for their own reasons. They allow Israel to avoid international condemnation, Miller said. And they allow the Palestinians to retain a degree of support from the United States.

"If, in fact, there is no real traction on the substance, [Kerry] starts to become part of the political furniture for the Israelis and Palestinians," Miller said. "They start to take him for granted and they start to use his presence."

Ghaith al-Omari, executive director of the Washington-based American Task Force on Palestine, said the failure of the talks was not due to missteps by Kerry. Instead, it was the result of complex Israeli and Palestinian domestic political dynamics that make historic concessions difficult. Regional powers Saudi Arabia and Egypt are also distracted by their struggles with Iran and the Muslim Brotherhood and less likely to give political cover to the Palestinians.

"I think it was less of a failure of negotiations, more of when we came to the moment of decision," he said. "The leaders weren't ready and their political environments weren't ready." Al-Omari also played down fears of renewed violence. He said that there were several differences between the current situation and the collapse of talks in 2000.

Among the differences are Palestinian President Mahmoud Abbas's long-stated opposition to using violence as a tool to advance the Palestinian cause and that the United States, so far, has not blamed either side for the unraveling of the process.

In contrast, former U.S. President Bill Clinton made no secret of his view in 2000 that the Palestinian side had been the more intransigent one. Palestine Liberation Organization Chairman Yasser Arafat was more willing to employ, tolerate, or encourage violence. "Clinton did not create an exit ramp for anybody," al-Omari said. "He did not leave any exit ramps." Al-Omari added that he believed a return to talks was possible. "It is not dead yet and therefore I would not exclude the possibility of some revival of the negotiations," he said. "Although the old challenges would remain—the regional and the political challenges."

Kerry, for his part, left Washington on Tuesday night for a week-long trip to Africa. An aide said he was showing "strategic patience" when it comes to the Middle East and "very serene and sanguine about it all."

NEXT STORY: Better Buying Power 4 Years On: Is It Making a Difference?