How to Overcome Challenges of Managing Hybrid, Multicloud Environments
Skip to Content
Get all our news and commentary in your inbox at 6 a.m. ET.
Ideas
5 Keys to the New US National Military Strategy

From new nukes to the growing threat of interstate war, the new document is the boldest statement yet of the 'complex and rapidly-changing' global security landscape.

General Martin Dempsey, outgoing Chairman of the Joint Chiefs of Staff, has just released a new, remarkably readable National Military Strategy (NMS). This document, alongside the President’s National Security Strategy (NSS) and the Secretary of Defense’s National Defense Strategy (NDS), forms the three pillars  of top-level U.S. defense strategy. The NMS offers the Chairman’s professional assessment of the global threat environment, which he describes as “the most unpredictable I have seen in forty years of service.” While the entire document is worth a read, here are five big takeaways from the new strategy:

U.S. forces must use forward presence to counter emerging threats, both state and non-state. The document observes that the tactics of “ hybrid war ” confer many new advantages on the aggressor; the best way to counter these is through forward positioning of military forces for deterrence, and failing that, to enable rapid reaction. Additionally, for hybrid actors like the self-declared Islamic State, defeating them requires “widely distributing U.S. military forces and leveraging globally integrated command and control processes” to disrupt their transregional networks. 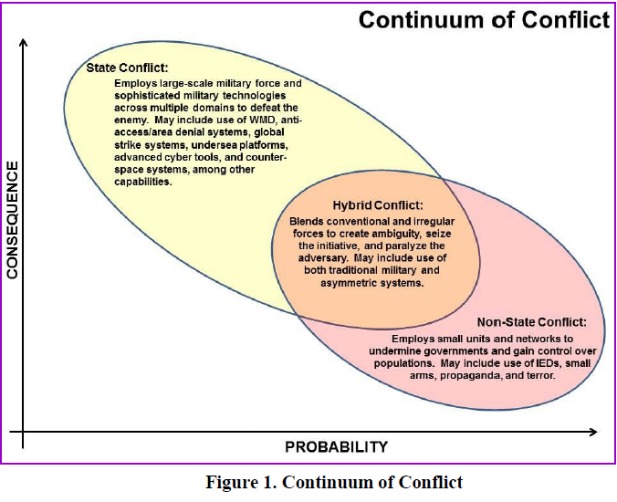 Coalition building and security cooperation are crucial, but each partnership must be tailored for the job. In today’s complex operations—with their strong emphasis on political, financial, and military sustainability—the United States must build and optimize the power of friendly coalitions. This reques two different sets of activities: promotingsecurity cooperation with mature allies and building capacity for emerging U.S. partners. In particular, with the recognition that prolonged campaigns against violent extremist organizations are here to stay, the strategy envisions the U.S.  military’s role as an enabler of local forces, leaving them to “secure their [own] homelands.”

The U.S. military cannot solely rely on its traditional technological advantages. According to the strategy, the current global environment is characterized by “complexity and rapid change.” Emerging technologies also make it far easier for adversaries to target U.S. communications and sensing systems through precision weaponry and offensive cyber capabilities. Consequently, “future conflicts between states may prove to be unpredictable, costly, and difficult to control.” This is especially true in fights against hybrid actors, whose assymetric advantages offered by information tools, IEDs, and cyber attack can circumvent many of the United States’ biggest strengths. Future warfighting is not just about building better robots, lasers, and satellites—it will continue to turn on smart planning and strong, creative, and empowered leadership.

(Read more: Dempsey’s Final Instruction to the Pentagon: Prepare for a Long War )

The threat of interstate war is “low but growing.” From Iran and Russia’s continual efforts to destabilize their regional neighbors to North Korea’s growing ability to threaten the U.S. homeland and China’s “aggressive land reclamation efforts” in the South China Sea, the NMS observes that the odds of America coming into conflict with a near-peer adversary are on the rise. But in the words of the document: “None of these nations are believed to be seeking direct military conflict with the United States or our allies.”

The U.S. nuclear arsenal needs an overhaul. In response to Russia’s nuclear saber-rattling the strategy emphasizes the need to ensure U.S. nuclear capabilities are modernized. Maintaining credible nuclear strike capability to counter proliferation by revisionist states is another stated objective. As Dempsey observes in his introduction, “Control of escalation is becoming more difficult and more important.”

In all, there are few surprises in this NMS. The main themes track closely with past speeches and testimony by Chairman Dempsey and Secretary of Defense Ash Carter, as well as themes in the President’s National Security Strategy released in February.  That said, this new document stands as the boldest statement to date of just how much the global strategic environment has transformed in the past few years. In the NMS, the U.S. military shows an appreciation for the complexity of these threats and a recognition that our own technological edge is at risk. Addressing these challenges will require as much investment in the next generation of creative leaders and concept development as new technological approaches to military operations.

Emerson Brooking and Zachary Austin contributed to this post.

NEXT STORY: Chart: The Airstrikes in Iraq and Syria vs. Previous Military Campaigns