Taking Flight: How Akima Is Helping to Shape the Airmen of the Future at the United States Air Force Academy
Skip to Content
Get all our news and commentary in your inbox at 6 a.m. ET.
Ideas
Put the X-47B Back to Work — As a Tanker

Before the US Navy spends another billion dollars on prototype UAVs, it should wring more lessons from its existing fleet. 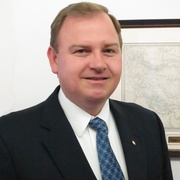 Salty Dog 501 and 502 sit silent in their hangars, their expected contributions to naval aviation unfulfilled. Before the Navy spends time and money ginning up another expensive new UAV, it should put its X-47Bs back to work.

Authorized for construction in 2007, the X-47B prototypes represent a billion-dollar investment by naval aviation to investigate how unmanned aircraft can be integrated into aircraft carrier operations. Their glory days included the first autonomous landing on an aircraft carrier and the first mid-air refueling by an unmanned aerial vehicle, and with just 20 percent of their designed flying lives expended, the two airframes were slated for yet more pioneering tests. Instead, naval aviation leaders have consigned the X-47B to museums, even as they struggle to define the next step in unmanned carrier aviation.

The Salty Dogs were built as prototypes for an unmanned attack aircraft, with a low-observable design, 4,000-pound internal payload, and range beyond 1,500 miles. But once they arrived, naval aviation leaders had a surprising change of heart. Instead of long-range strike, they said, the capability most needed on the carrier was long-range surveillance. Yet the Navy had just finished buying 68 unmanned MQ-4C Triton broad area maritime surveillance vehicles, enough to serve the fleet’s carrier strike groups, according to the program’s requirements documents. Moreover, the decision seemed to ignore the rising threat of anti-access/area denial (A2/AD) weapons, such as China’s DF-21D carrier-killing ballistic missile, which are designed to force carriers back beyond the range of its airwing, which presently has an average unrefueled range of around 500 miles. Objective analysis suggests that the airwing requires a long-range, strike asset similar to the X-47B’s design.

Related: To Save the Navy’s Next-Gen Drone, Kill It First

Related: Why The Pentagon Must Not Lose The Innovation Arms Race

It is important to note that the original test plan of the Salty Dog aircraft is far from complete. As approved by Chief of Naval Operations Adm. Gary Roughead, the plan also includes:

Not surprisingly, other voices inside the Pentagon have become involved in the conversation. In fact, they have ordered the Navy to stop planning to acquire an unmanned surveillance vehicle and to look instead at developing an unmanned aircraft that can serve as a mission tanker with an eye towards extending the range of current manned aircraft to overcome the A2/AD pushback. Such a decision makes sense if the design represents a tanker that can subsequently evolve into a strike aircraft, the ultimate capability required, but would make no sense if the design represented a basic surveillance aircraft that also serves as a tanker. Such a design would not match the normal mission profile (altitude and airspeed) of strike aircraft, nor would it be optimized to carry heavier loads and hence adequate fuel “give” to other aircraft to effectively extend their range.

So here is a suggestion: Do something crazy and complete the original X-47B/Salty Dog test plan, checking off each of the evolutions originally called for when the aircraft were purchased, but also adding an additional test. Take one of the Salty Dog aircraft and install a 4,000-pound fuel bladder into its bomb bay and then a hose-and-drogue buddy store on a hard point to allow the Salty Dog to serve as the test platform for the concept of an unmanned tanker. The X-47B’s mission profile, 40,000-plus feet in service altitude and its high subsonic airspeed, will allow it to naturally integrate with the current array of manned carrier aircraft. What’s more, it can begin testing now.

Times are fiscally tight, the enemy is moving out, and we have two airframes sitting in hangars that can help the Navy figure out its future. It is time to use them  — right here, right now.

Correction: An earlier version of this story misstated the expected remaining life of the X-47 prototypes.