Federal Agencies Tap Data Visualization to Track and Mitigate the Spread of COVID-19
Skip to Content
Get all our news and commentary in your inbox at 6 a.m. ET.
Ideas
Weapons of the Syrian War: Suicide Bombers

The tactic is often used in offensive operations, just after an artillery barrage and before the advance of hundreds of foot soldiers.

Nusra militants struck again in July 2012 , in downtown Damascus, killing President Assad's defense minister along with several senior members of the military and intelligence staffs. By the end of a bloody 2012, Nusra had taken credit for 41 of the 50 suicide attacks that killed Syrians, The Long War Journal noted .

Evidence of the Islamic State's use of suicide bombers isn't difficult to locate on the web. Here's a look at recent Islamic State propaganda in which the group claims 41 suicide attacks in Syria and 100 more in Iraq during the month of June.

A harbinger for Syria? By mid-2016, suicide bombings were on the rise in Iraqi cities where government forces had forced ISIS out, such as Ramadi and Fallujah, or where the group was on the defensive, such as Mosul . Other factions inside Syria use the tactic more often in offensive operations: first comes an artillery barrage, then suicide bombs, heavy weaponry, and hundreds of militants on foot acting as a light infantry force to swarm and overwhelm defenses. 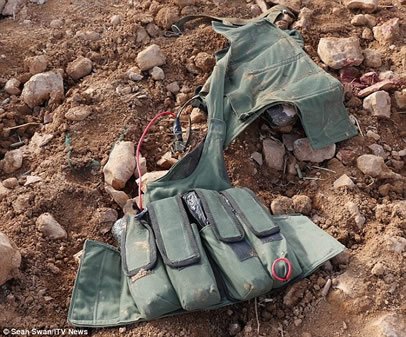 Improvised munitions: In Syria and Iraq, if fighters can tape a bomb to it, it’s probably been used in a car bomb, roadside bomb, or suicide attack. Explosively-rigged copies of the Quran were reportedly discovered in an Iraqi town ISIS left in February, according to the U.S. military.

Costs: between $25 and $265 for roadside bomb varieties like those that proliferated during the Iraq war, tactics a revived al-Qaeda brought to Syria.

Insurgency economics: U.S. forces in Iraq and Afghanistan who found an IED on the battlefield frequently summoned nearby aerial surveillance aircraft, the costs of which could soar into the many thousands of dollars per flight hour. And if you’re out of drones, your manned platforms start at nearly $18,000—for a bomb that often costs less than $300 to produce.

High-end IEDs: If planners want to use triacetone triperoxide ( TATP , aka "mother of Satan") to replicate a Brussels-like attack, they'll probably need between $10,000 and 15,000, said Jonathan Schanzer, former U.S. Treasury terrorism finance analyst and now of the Foundation for Defense of Democracies.

NEXT STORY: Weapons of the Syrian War: Advisors