Nine Reasons Congress Should Nix the Air Force’s F-15EX Purchase
Skip to Content
Get all our news and commentary in your inbox at 6 a.m. ET.
Policy
How to Defeat the Islamic State, According to Ted Cruz

The senator’s brand of national security is more steeped in dangerous, pandering rhetoric than actual military advice. By Peter Beinart

The Republican Party is divided on foreign policy. There are “interventionists” like John McCain and Lindsey Graham who want America to more aggressively wage war—either directly or via proxies—in Iraq, Syria, Iran, Afghanistan, Ukraine, and beyond. And there are “isolationists” like Rand Paul who worry that if America tries to fix the world’s problems through the barrel of a gun, we’ll become a bankrupt empire rather than a prosperous republic.

Then there’s Ted Cruz, who unites both factions by embodying the worst of each.

Take Cruz’s position on ISIS. Like McCain and Graham, Cruz believes in basing American policy on the most apocalyptic assessment of the ISIS threat. When Chairman of the Joint Chiefs of Staff Martin Dempsey testified before the Senate Armed Services Committee this week, Cruz did not ask him to analyze the risk ISIS poses to the United States. He asked Dempsey to sketch the “worst-case scenario” that ISIS could possibly present. Then Cruz took to the airwaves to chastise the White House for not recognizing the severity of the danger.

Cruz is particularly incensed by the Obama administration’s failure to recognize the threat of an ISIS attack across the Rio Grande. “First and foremost,” he wrote on CNN’s website, “Washington should resolve to make border security a top priority finally, rather than an afterthought, of this plan in light of concerns about potential ISIS activities on our southern border.” That’s right. America’s “foremost” priority when it comes to ISIS should be neither Iraq nor Syria but Mexico.

Like McCain and Graham, Cruz also wants to kill first and ask questions later. He’s suggested that America “bomb [ISIS] back to the Stone Age.” (The quote echoes General Curtis LeMay’s advice during Vietnam; that turned out well.) At this week’s hearing, Cruz demanded not merely that the U.S. “destroy ISIS—not degrade them.” He also demanded that it do so “within 90 days.” When Dempsey said that wasn’t possible, Cruz issued a press release saying the general was wrong. 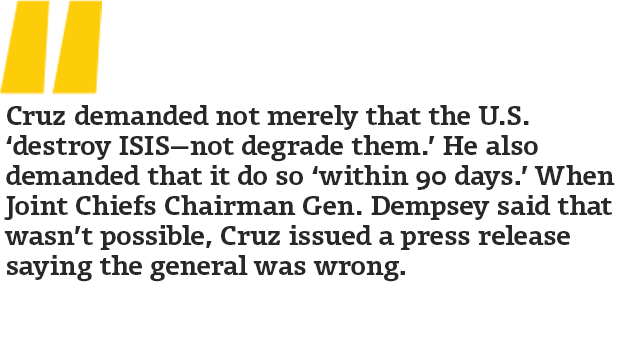 But while Cruz resembles McCain and Graham in hyping threats and dropping bombs, he morphs into Rand Paul when the subject turns to political engagement overseas. McCain and Graham want to train and arm the Free Syrian Army so that when America bombs ISIS, non-jihadist rebels seize their territory and eventually pressure Bashar al-Assad into a political settlement. Cruz doesn’t. When it comes to Syria’s “moderate” opposition, he’s doubtful that the United States “can tell the good guys from the bad guys.”

That may be true. But most commentators who share Cruz’s skepticism about arming the rebels are skeptical of a bombing campaign too, arguing that it won’t do much good on the ground. Cruz doesn’t care. He wants to pulverize Syria from the air without any effort at political change on the ground. America’s strategy against ISIS, he insists, should not be “laden with impractical contingencies, such as resolving the Syrian civil war.”

Cruz is equally indifferent to the politics of Iraq. McCain and Graham want to leverage America’s renewed military involvement there to create a government in Baghdad inclusive enough to lure Sunnis away from ISIS. Cruz thinks that’s a waste of time. In an interview with Sean Hannity, he mocked Dempsey for saying that to defeat ISIS “we need to see political reconciliation. We need to change the conditions on the ground so people are not susceptible to extremism.” Cruz was incredulous. “Look,” he told Hannity, “it’s not our job to be social workers in Iraq and put them all on expanded Medicaid.”

Like George W. Bush before them, McCain and Graham are militaristic optimists. They want America to bomb and arm its way toward a free, pro-American Middle East. Cruz is a militaristic pessimist. He mocks the Obama administration’s effort to foster reconciliation “between Sunnis and Shiites in Baghdad” because “the Sunnis and Shiites have been engaged in a sectarian civil war since 632.” Notably absent from his rhetoric is the Bush-like claim that Muslims harbor the same desire for liberty as everyone else. Instead of mentioning that most of ISIS’s victims have been fellow Muslims, Cruz frames America’s conflict in the language of religious war. “ISIS right now is the face of evil. They’re crucifying Christians, they’re persecuting Christians,” he told Hannity.

Notice the difference. When Sunnis kills Shiites, Cruz shrugs because there’s been a sectarian divide within Islam since 632. But when Muslims kills Christians—another conflict with a long history—Cruz readies the F-16s.

With his combination of military interventionism and diplomatic isolationism, Cruz probably better reflects the views of GOP voters than any of his potential 2016 rivals. According to polls, Republicans are more likely than Democrats to see ISIS as a threat to the U.S. and to back airstrikes against it, but less likely to support arming Syria’s non-jihadist rebels. As Republican strategist Ford O’Connell recently told The Hill, “Ted Cruz is probably most in line with the Republican base in the sense he doesn’t want to have a discussion of Syria versus Iraq. He wants to dismantle and destroy ISIS. Period.”

More than a decade after the invasion of Iraq, this is where the GOP has ended up. Ted Cruz wants to kill people in the Middle East who he believes might threaten the United States. And he wants to defend Christianity there. Other than that, he really couldn’t care less.