Federal Agencies Tap Data Visualization to Track and Mitigate the Spread of COVID-19
Skip to Content
Get all our news and commentary in your inbox at 6 a.m. ET.
Threats
Air Strikes in Syria Are ‘Only the Beginning’

President Obama says he’s willing to do what it takes to destroy Islamic fighters in Iraq and Syria, drawing the U.S. back into war in the Middle East. By Stephanie Gaskell

It wasn’t quite “shock and awe,” but the United States is firmly back at war in the Middle East. After conducting nearly 200 air strikes in Iraq, the U.S. military, along with a handful of other Arab nations, have begun a targeted air campaign against Islamic extremists inside Syria.

This is “only the beginning,” Pentagon spokesman Rear Adm. John Kirby said at the Pentagon on Tuesday, the morning after the a torrent of guided missiles and fighter jets struck targets in eastern Syria. Nearly two weeks ago, President Barack Obama said he was willing to take the fight to Islamic State militants inside Syria, and he made good on that promise, striking a command and control center in Raqqa, about 100 miles east of Allepo.

Kirby said the strikes were “very successful” and that the military did not warn the Assad regime of the attacks, though Obama did announce two weeks ago that he was prepared to strike in Syria. "While the United States did inform the Syrian regime through our U.N. ambassador of our intent to take action, there was no coordination and no military-to-military communication,” Kirby said. But the strikes weren’t targeted at the Islamic State alone. The Khorasan Group, an al-Qaeda-affiliate of high-level, veteran bomb makers who administration officials say were in the “final stages” of planning an “imminent attack” against the West, and possibly on U.S. soil, were also on the receiving end of Monday night’s attacks.

(Read More: Obama Now Owns the Struggle of the Syrians)

“The Khorasan Group is a group of extremists that is comprised of a number of individuals who we've been tracking for a long time. It includes some former al-Qaeda operatives, core al-Qaeda operatives from Afghanistan and Pakistan who made their way to Syria (and) remain, in our view, affiliated with al-Qaeda. And we have been monitoring over the course of many months the development of plotting against the United States or Western targets emanating from Syria,” Deputy National Security Adviser Ben Rhodes told reporters on Tuesday.

When asked why Obama didn’t mention the threat from the Khorasan Group in his televised message to the American people two weeks ago, Rhodes said the group is merely a part of the larger fight against al-Qaeda. “We see this very much as an extension of the threat posed by al-Qaeda and their associated forces,” he said. “These are individuals who have their origin, their history serving in al-Qaeda. They’re known to people who’ve been following this threat for years. They were in Afghanistan and Pakistan. So this, frankly, is a part of the ongoing effort against al-Qaeda in which you’ve seen us take strikes in Yemen; you’ve seen us take strikes in Somalia. When there’s an al Qaeda target we're going to take action against it.” 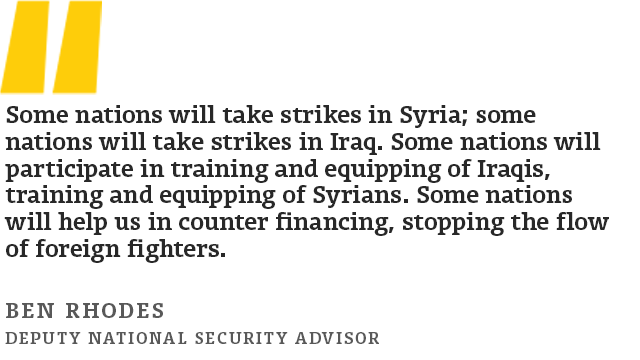 A spokesperson for British Prime Minister David Cameron said he supports the air strikes and will meet with other leaders at the United Nations General Assembly meeting in New York this week to talk about “what more the U.K. and others can do to contribute to international efforts to tackle the threat we all face from ISIL.” The U.K is supplying weapons to Kurds in Iraq and conducting surveillance operations.

Obama spoke to reporters very briefly on Tuesday morning before heading to New York to shore up support for the war and again outlined his goals to destroy ISIL (aka ISIS or IS) and reiterated that he is not acting alone in the Middle East. “The strength of this coalition makes it clear to the world that this is not America’s fight alone. Above all, the people and governments in the Middle East are rejecting ISIL and standing up for the peace and security that the people of the region and the world deserve.”

The U.S. plans to arm and train moderate, vetted Syrian rebels to fight ISIL fighters and ultimately go up against the Assad regime, but that could take years to complete. At a Pentagon briefing on Tuesday, Army Lt. Gen. William Mayville, director of operations for the Joint Chiefs of Staff, was asked if the attacks against the Islamic State and the Khorasan Group will ultimately benefit Assad. "Our immediate tasks," he said, "are to continue the degradation of ISIL in Syria and Iraq [and] to build and strengthen regional partners and to build a regional coalition."

Still, Rhodes conceded that it would be a long road. “We don’t expect to in any way have solved this challenge in one night of airstrikes.  This is clearly going to have to be a sustained campaign.”

NEXT STORY: The Khorasan Group Was Planning an ‘Imminent Attack’ on the West