Sequestration didn’t unduly affect small biz: report; Hunkering down for another CR; Where to invest, per the National Defense Strategy; and more

The recent three-day shutdown brought back a lot of memories of 2013, when the U.S. government closed for 16 days in October. It was a bad year, budget-wise; that March brought the sequestration spending cuts.

So why does this matter now? At the time, many organizations claimed sequestration and budget caps would “dramatically impact smaller firms” the most; witness this Aerospace Industries Association report from September 2012. This week, a new Center for Strategic and International Studies report on recent budget trends found that did not happen.

“There was a lot of concern before sequestration happened that small businesses would be disproportionately harmed,” said Andrew Hunter, a former Pentagon official who’s now a senior fellow at CSIS and one of the new report’s authors.

But that concern was “not necessarily supported” by the data analyzed by CSIS, according to Rhys McCormick, an associate fellow at the think tank and lead researcher on the study. Small firms mostly succeeded in holding market share, the report said. And by one measure — share of Pentagon contracts — small businesses have improved their lot, rising from 16 percent before sequestration to 18 percent today, McCormick said.

Meanwhile,  “Medium and large vendors’ shares were more volatile,” the report said. The “Big 5” — Lockheed Martin, Boeing, Raytheon, Northrop Grumman and General Dynamics — has seen its work shift away from research and development toward products and services.

Stay tuned: Last July, an executive order called for an assessment of U.S. manufacturing capacity, defense industrial base, and supply chain resiliency. That assessment, which was to be led by the defense secretary with help from a lot of other federal departments and agencies, is due by April 17.

Why the Shutdown Didn’t Much Affect Defense Firms // Marcus Weisgerber

Timing is everything. Three days — including a weekend — is not quite enough to cause production problems that really hurt.

The US Navy’s Next Frigate Should Jumpstart a Revitalization of the Defense Industrial Base // Robert C. O’Brien and Jerry Hendrix

As it searches for a good design at a good price, the Pentagon should bear in mind decades-old lessons about manufacturing’s ties to national security.

Left-of-Launch Missile Defense: ‘You Don’t Want to Have Just One Solution to the Threat’ // Caroline Houck

The 3-star commander of the US Army’s space and missile-defense efforts talks about the changing mix of ways to counter threats.

Where to Invest, Per the New National Defense Strategy

The Pentagon’s recently unveiled National Defense Strategy shifts from counterterrorism to great-power competition with Russia and China. So what does that mean for investments? The strategy mentions a growing need for nuclear forces, space and cyber, missile defense, joint lethality in contested environments, C4ISR, advanced autonomous systems, and resilient and agile logistics. Look for money and programs in those areas in the future, writes Cowen’s Roman Schweizer. But as Capital Alpha Partners’ Byron Callan asks: how is the new strategy resourced?

If you’ve ever talked to Frank Kendall, you know he loves data. He punctuated his tenure as defense undersecretary for acquisition, technology and logistics with annual data-driven reports about the Pentagon’s acquisition enterprise. It was part of a quest to identify at-risk areas within the defense industrial base; as undersecretary, Kendall met every year with senior budget officials to recommend areas that needed specific investments. “One of the things that often happened at those meetings is that the four-star people who were normally at the table would be replaced by three-star people,” Kendall said at the CSIS event on Monday. “That’s not a good indication. It’s a mistake, fundamentally, to take the industrial base for granted. It is not a given that people will be in the business of supplying things to the Defense Department.”

How is the Pentagon looking at defense-industry mergers and acquisition?.“We’re going to continue to look at things on a case-by-case basis,” says Eric Chewning, deputy assistant defense secretary for manufacturing and industrial base policy.

Now that earnings season has kicked off, we’ll get a chance to hear CEOs weigh in on, say, how they like operating under a continuing resolution for the first four months of 2018. Phebe Novakovic, chairman and CEO of General Dynamics, was first in the queue this quarter. Here are her thoughts. “Typically, we can cover a relatively short-term CR rather wholesomely and this year was a little bit different … But what we’ve done is appropriately hedged our guidance with some expectations around varying length of the CR. So we will be and I believe better shape, and we’re comfortable that we’re in better shape this year with an extended CR than we were last year.”

Back to the Future in Canada

If you believe in history repeating itself, you should watch this CBC special report from 1980 when Canada was considering buying the McDonnell Douglas F/A-18. If you close your eyes, you might think it was describing the F-35 Joint Strike Fighter. The report references “doubts about the” Hornet; the plane’s rising costs, capability limitations and even talks about how some in U.S. Navy would rather buy more F-14 Tomcats. Sound familiar yet? It’s an awful lot like the Super Hornet versus F-35 debate that’s been under way for years. Now that Canada has officials reversed course on buying new F/A-18 Super Hornets from Boeing, opting for used Australian Hornets (and essentially vowing to never do business with Boeing again), the question becomes: does the F-35 eventually become Canada’s fighter jet of the future?

Trump Speaks at Davos on Friday

Set your alarm (or just stay up late tonight) if you want to see President Trump’s address at the World Economic Forum tomorrow. He speaks at 8 a.m. local time, so 2 a.m. in Washington. The defense minister speaking at Davos: Germany’s Ursula von der Leyen. Here’s a Davos discussion about the global arms trade from earlier this week.

The announcement came tucked inside a press release ostensibly about the Ukrainian airline’s successful delivery of an Emirati communications satellite built by Orbital ATK from Virginia to France. Why it matters: It’s the latest move in a push by Ukrainian companies to deepen their relationship with the United States and the West. The airline recently opened another office in London. 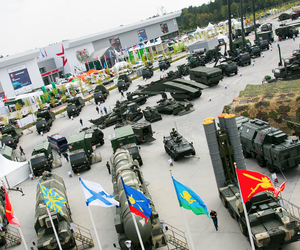 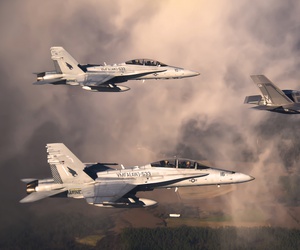 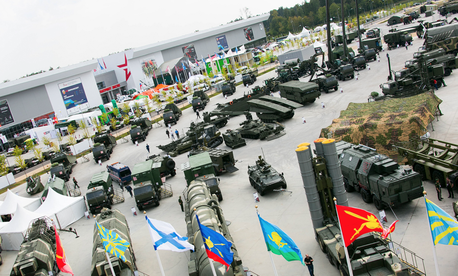 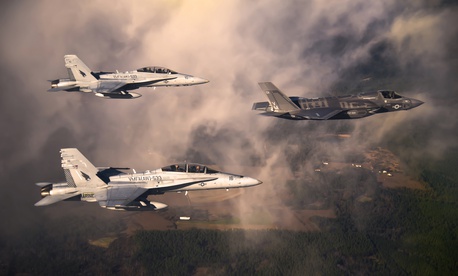