Federal Agencies Tap Data Visualization to Track and Mitigate the Spread of COVID-19
Skip to Content
Get all our news and commentary in your inbox at 6 a.m. ET.
Ideas
Actual Telepathy Is One Step Closer to the Battlefield

Can you read my mind? Researchers announce first brain-to-brain communication without a surgical implant. By Patrick Tucker

Forget battlefield smartphones; the future of soldier-to-soldier communication may be electronic telepathy. A group of researchers in Europe have developed what they are calling the first “human brain-to-brain interface,” allowing people to communicate telepathically through the Internet without a surgical implant, bringing us closer to the day when soldiers behind enemy lines exchange information via sensors reading their thoughts.

The primarily Spanish researchers, who published their findings in the journal PLOS ONE, started with four participants between the ages of 28 and 50. One subject, called the emitter, was located in Thiruvananthapuram, India, and wore an electroencephalography (EEG) cap that could pick up the electromagnetic activity in his brain. The subject was asked to concentrate on moving an object on a screen vertically and horizontally. A computer picked up the signals and turned them into code to represent ones or zeroes. The subject was able, after training, to achieve 90 percent accuracy in creating these signals. The message was sent in email form to three blindfolded subjects in Strasbourg, France, via transcranial magnetic stimulation or TMS.

This second group of subjects received a subtle jolt to the occipital lobe, a portion of the brain associated with sight, which caused them to experience phospenes, the sensation of perceiving light when none is present.

The end result was that a coded message was transferred, via a computer interface, between two brains without surgical implant – a historic first.

“In both cases, the transmitted pseudo-random sequences carried encrypted messages encoding a word—‘hola’ (‘hello’ in Catalan or Spanish) in the first transmission, ‘ciao’ (‘hello’ or ‘goodbye’ in Italian) in the second,” the researchers write in the paper. They also report that the achieved an accuracy rate of 85 percent.

The European Commission’s Future and Emerging Technology, or FET, program, funded the research, in part, out of a €2.7 million grant. FET is sometimes referred to as the European version of the Pentagon’s Defense Advanced Research Projects Agency, or DARPA. It’s a program to support moonshot research at the earliest stages with a time horizon beyond what would be practical for a venture capitalist or a private investor. The current research certainly falls within the category of ambitious beyond practical. But synthetic telepathy has, in fact, been part of the right-around-the-corner future for decades. 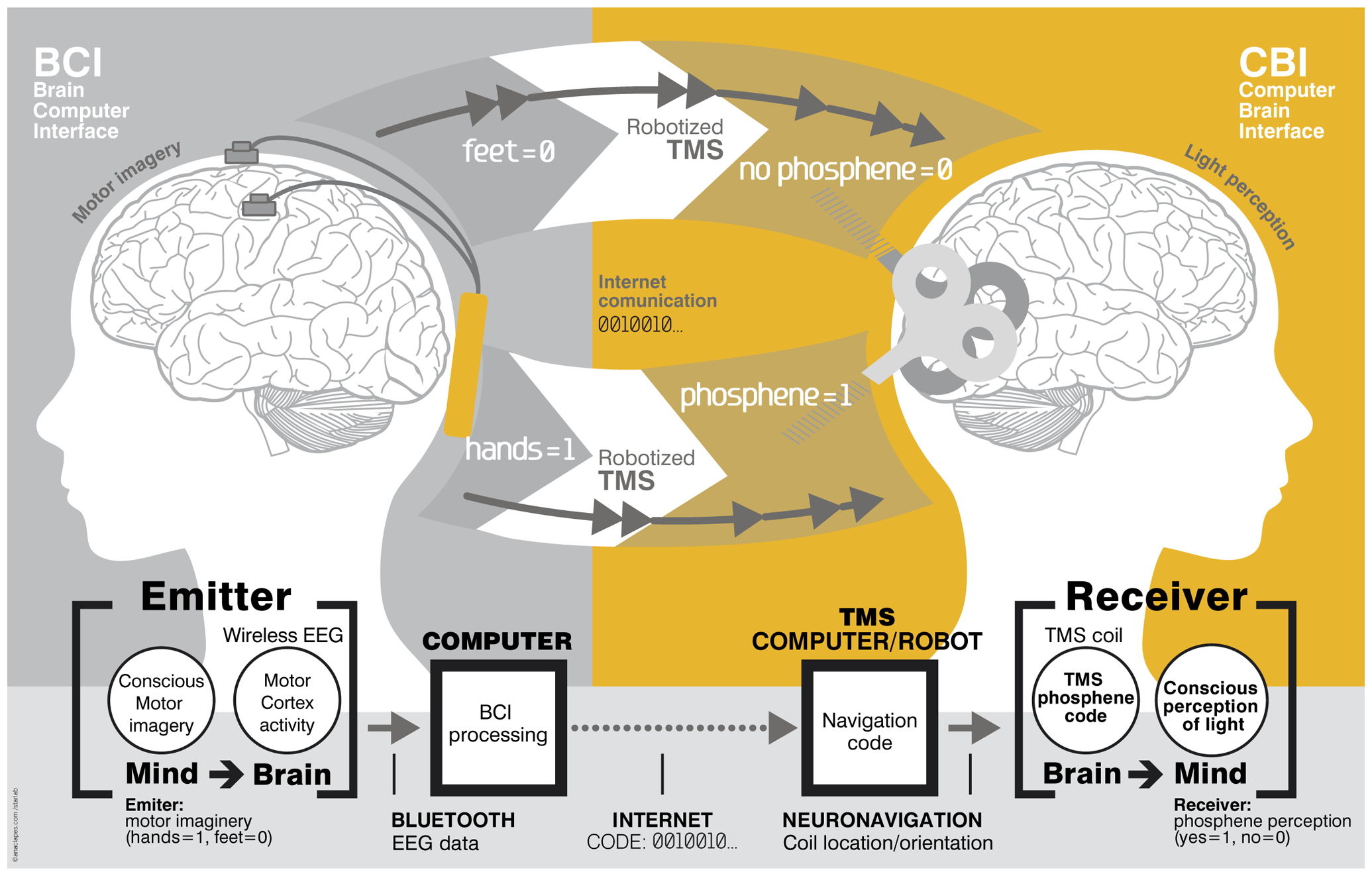 It’s also an area that the United States military has been researching for years, beginning in 1967 when Edmond M. Dewan, affiliated with the defunct Air Force Cambridge Research Laboratories, published this paper in the journal Nature showing that human subjects could train themselves to emit Alpha waves (electromagnetic brain waves between 8 and 12 hz) in Morse code.

In 2008, the U.S. Army gave researchers from UC Irvine, the University of Maryland and Carnegie Mellon University a $4 million grant to create what was then dubbed “synthetic telepathy,” or a system to translate brain signals configured as code between the helmets of soldiers.

The Spanish researchers’ breakthrough moves that concept much closer to reality but the method that the researchers describe in their paper is extremely slow. The electronic pops and cackles that your brain emits when you visualize movement aren’t really speech, after all, and don’t lend themselves easily to the exchange of words or ideas, and certainly not complex ones. It’s something that University of Wisconsin researcher Adam Wilson discovered in April of 2009 when he used EEG to post an update to Twitter. “You have to press a button four times to get the character you want… So this is kind of a slow process at first,” he remarked.

“I think that in practical terms the main obstacles for non-invasive [brain-to-brain communication] technology is we still don’t understand where the limit is, how far beyond the simple, slow transmission of sensations we can go. It is hard to give a window, but if obstacles are overcome, something practical could be achieved around in 30 years,” Giulio Ruffini, one of the PLOS ONE study’s co-authors told Defense One.

In the meantime, the military could achieve a similar effect with so-called invasive implants, or sensors that have been surgically implanted in a subject. The closer the sensor is to the source of the electromagnetic activity—the brain—the clearer the signal will be.

“Invasive solutions can in principle be much more powerful. But their nature precludes wide applications. You’d have to introduce implants in people’s brains,” said Ruffini. He puts the arrival date for synthetic telepathy via surgical means closer to twenty years away.

But recent research suggests he may be under-estimating the speed of progress. 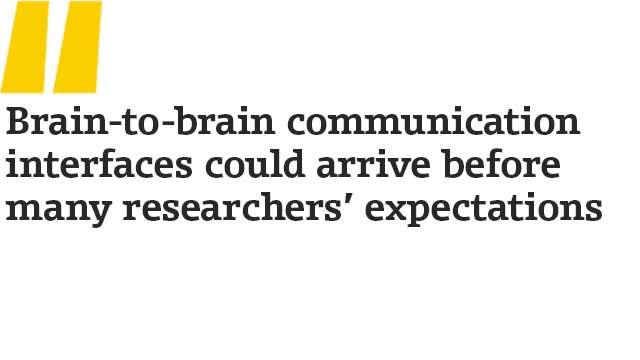 The proof of concept for surgically-embedded communication implants extends back to 2002, when artificial intelligence and cybernetics researcher Kevin Warwick spent three months with an implant connected to his peripheral nervous system via his arm. In one experiment, he hooked his implant to the Internet and then sent signals to electrodes that he had implanted in his wife’s arm. He described the experiment to ITWALES.com in 2006. “[W]hen she moved her hand three times, I felt in my brain three pulses, and my brain recognized that my wife was communicating with me. It was the world's first purely electronic communication from brain to brain, and therefore the basis for thought communication."

Ruffini says that Warwick's experiment is not brain-to-brain communication because it's mediated by the peripheral nervous systems with the hand serving as an intermediary.

Brain-to-brain communication over the Internet may never be the best solution for the battlefield, despite the millions of dollars of Pentagon research money that’s gone into exploring it. But the military may achieve interesting results with direct brain control over machinery, as several German researchers recently demonstrated via an experiment where subjects successfully steered simulated aircraft via an EEG interface. The commercial market for brain-based gaming systems, such as the NeuroSky console, while still small, has grown quickly enough to support multiple conferences and Kickstarter campaigns in just the last three years. Today, these systems are faddish at best but if their makers can overcome the frustration factor and design some fun into them, then the body of useful data about EEG signaling may take off as quickly as the Nintendo 64 in 1996.

Brain-to-brain communication interfaces could arrive before many researchers’ expectations. So keeping your thoughts to yourself just got a little harder.