Federal Agencies Tap Data Visualization to Track and Mitigate the Spread of COVID-19
Skip to Content
Get all our news and commentary in your inbox at 6 a.m. ET.
Ideas
How Many Airstrikes Did US Forces Execute in 2016?

Estimates from government releases show Iraqi and Syrian targets got hit the hardest.

By Micah Zenko and Jennifer Wilson,
Council on Foreign Relations

As President Obama enters the final weeks of his presidency, there will be ample assessments of his foreign military approach, which has focused on reducing U.S. ground combat troops (with the notable exception of the Afghanistan surge), supporting local security partners, and authorizing the expansive use of air power. Whether this strategy “works”—i.e. reduces the threat posed by extremists operating from those countries and improves overall security and governance on the ground—is highly contested. Yet, for better or worse, these are the central tenants of the Obama doctrine.

In President Obama’s last year in office, the United States dropped 26,171 bombs in seven countries. This estimate is undoubtedly low, considering reliable data is only available for airstrikes in Pakistan, Yemen, Somalia, and Libya, and a single “ strike ,” according to the Pentagon’s definition, can involve multiple bombs or munitions. In 2016, the United States dropped 3,027 more bombs—and in one more country, Libya—than in 2015 .

To determine how many U.S. bombs were dropped on each Iraq and Syria, we looked at the percentage of total U.S. OIR airstrikes conducted in each country. They were nearly evenly split, with 49.8 percent (or 2,941 airstrikes) carried out in Iraq, and 50.2 percent (or 2,963 airstrikes) in Syria. Therefore, the number of bombs dropped were also nearly the same in the two countries (12,095 in Iraq; 12,192 in Syria). Last year, the United States conducted approximately 67 percent of airstrikes in Iraq in 2016, and 96 percent of those in Syria. 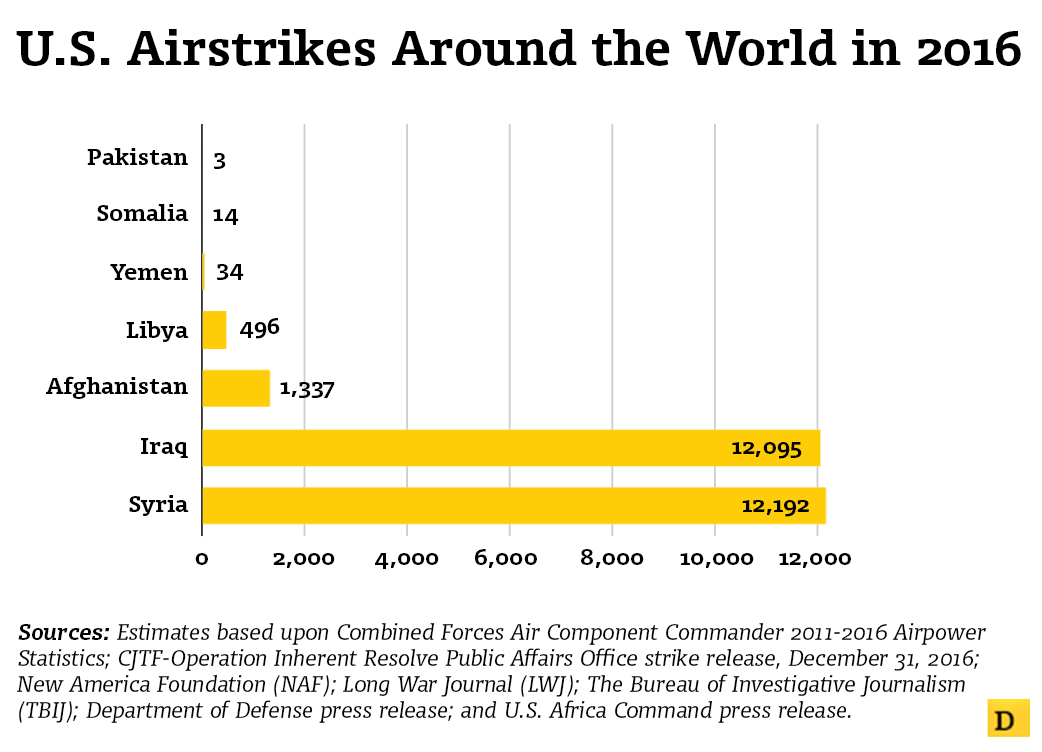 NEXT STORY: As Trump's Foreign Policy Emerges, Watch His Temperament in Washington