Building Stronger Public Health through the Pandemic and Beyond
Skip to Content
Get all our news and commentary in your inbox at 6 a.m. ET.
Policy
Pentagon Wants to Keep Controversial War Budget Beyond Afghanistan

The war in Afghanistan is winding down, but the Pentagon hopes its war budget goes on. By Stephanie Gaskell

The number of U.S. troops in Afghanistan has shrunk to about 37,000 as the war there comes to an official close by the end of the year. President Barack Obama is planning to leave a force of about 10,000 troops in Afghanistan – or none at all – depending on whether a troop deal is reached. But despite the massive drawdown, Pentagon officials want to keep a comparably oversized war chest funded well into next year, quickly raising eyebrows among members of Congress.

The fiscal year 2015 budget calls for $79 billion for Overseas Contingency Operations, or OCO, which funds the war in Afghanistan and other overseas operations. Although the U.S. footprint in Afghanistan has shrunk over the past couple of years, the war budget has stayed robust. This year Congress approved $85 billion for the account.

During Defense Secretary Chuck Hagel’s budget presentation to the Senate Armed Services Committee on Wednesday, Sen. Mike Lee, R-Utah, asked, “On one end of the spectrum, we hear high estimates suggesting there might be 10,000 troops or so remaining after the withdrawal. Others suggest that it might be closer to zero. But even at the higher end of these estimates, if it were, let's say, at the 10,000 range, this would still represent nearly a two-thirds decrease in our presence in Afghanistan next year. So can we expect, in light of that, to see a corresponding decrease in the OCO request for next year?”

Hagel said the account isn’t used just for the war in Afghanistan. “That part of the budget, the overseas contingency part of the budget, has many things in it,” he said. “There are readiness issues and so on. It isn't just Afghanistan, as you know. Yes, obviously we are waiting, you've correctly noted, to see [if] we get some better clarity on what the future post-2014 world might be.”

Pentagon Comptroller Bob Hale said although there is a small cut to next year’s OCO budget, it’s “ a decrease, but not proportional.” The fund could pay for Afghan troops and other costs of winding down the war unrelated to troop costs.

“There are items in there that won't come down in proportion to boots on the ground, reset, fixing equipment as it comes out. Afghan national security forces are possibilities, and there are others as well,” Hale said. When asked how much the OCO budget would come down after the war ends, Hale said: “I'm not prepared to give you a number. It will come down, but I wouldn't expect it to be proportional.”

(Click below to see a larger version of the chart) 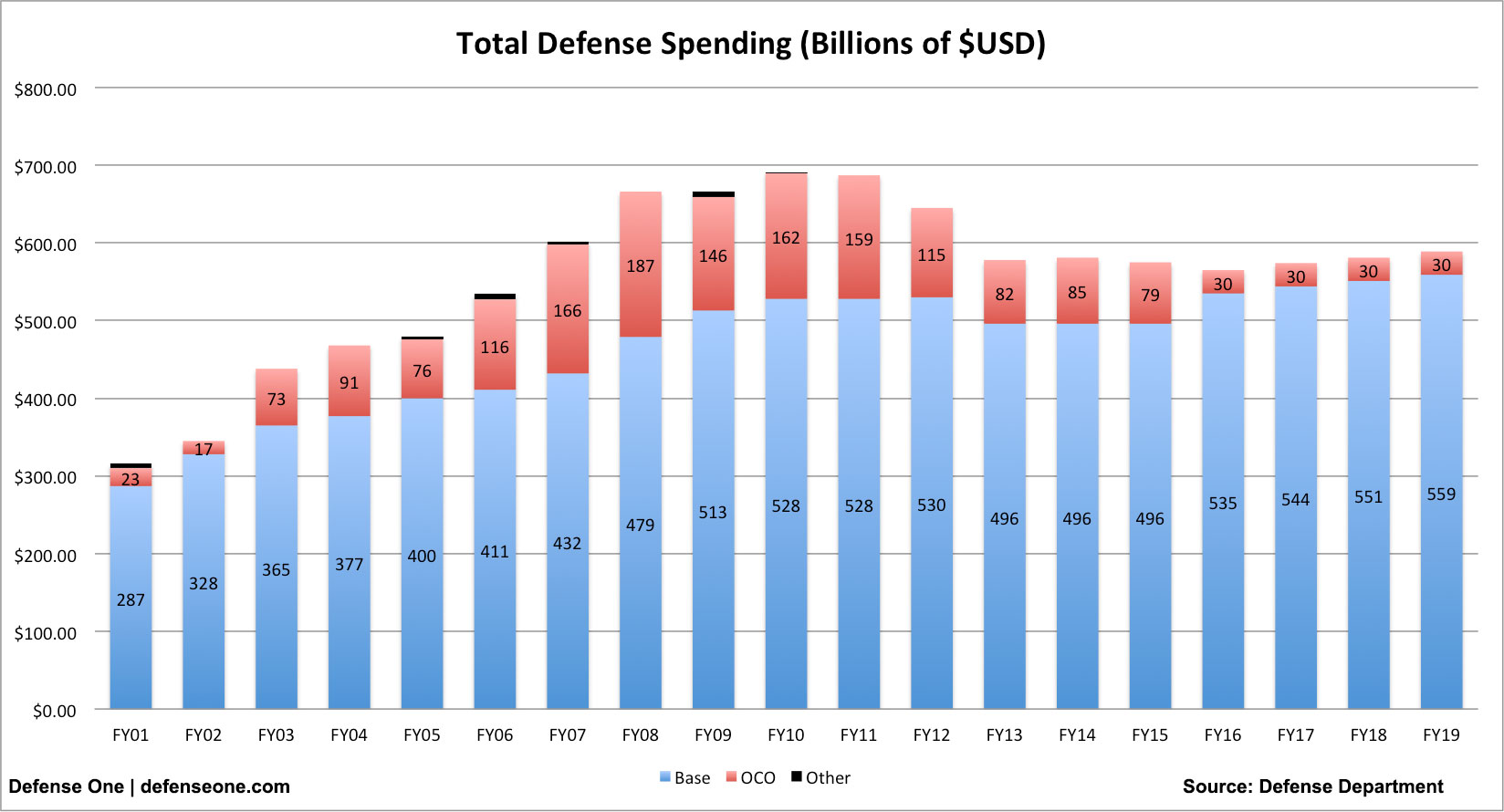 The OCO budget ballooned over the past decade, hitting $187 billion in 2008, at the height of the Iraq War. It has often been used to fund other things besides war costs, especially after sequestration became law. Todd Harrison, budget analyst with the Defense Department-funded Center for Strategic and Budgetary Assessments, told Defense News that about $20 billion in regular Army and Air Force operations and maintenance funding is being paid for by the OCO account this year. The Army and Marine Corps are using it to fund pay and benefits for 38,000 troops. “This is an uncapped funding stream that exists for DOD, and both the administration and Congress have been willing to use it to soften the impact of sequestration,” Harrison said.

Lawmakers may have some time to wait for a clearer answer on the president’s desired war budget. The Pentagon is calling the $79 billion figure a “placeholder” and not part of the White House’s formal budget request released this week. The budget also calls for $30 billion in OCO funding “placeholders” from FY 2016 through FY 2019.

Joint Chiefs Chairman Gen. Martin Dempsey said it could be months before a decision is made on whether there will be any U.S. troops in Afghanistan after this year.

“We'll be prepared to support a variety of options over the next several months as our relationship with Afghanistan moves forward. This includes, of course, the option to draw down by the end of the year if that's the decision made by our elected leaders,” Dempsey told the committee. “We're in a condition of low risk right now. You know, our retrograde is going on pace, so the risk of having retrograde be affected is low. By about the middle of this summer, it goes to moderate. By the fall, it goes top high.”

NEXT STORY: Obama Says the 'Window Is Closing' for a Mideast Peace Deal