Next Generation Interceptor: The Nation’s Next First Line of Defense Against Ballistic Missile Threats
Skip to Content
Get all our news and commentary in your inbox at 6 a.m. ET.
Science & Tech
About Those Chinese Aircraft Carrier Pics: What We Know and What We Can Guess

There’s a lot to glean from the Google Earth pictures of China’s first homegrown aircraft. Assuming that’s what this is. By Jeffrey Lin and P.W. Singer

Back in the Cold War, we had to wait for May Day parades and top-secret spy satellite photos for hints as to what new weapons the great powers were working on. Today, all we need is Google.

On August 1, 2013, pictures of a large ship under construction appeared on the Internet.  These pictures have been matched to a search of Google Earth at coordinates 31 21'12.78" N and 121 44'27.55" E , that showed a module of a large ship under construction at the Shanghai Changxingxiang Jiangnan Shipyard, which had a width of 51 meters and a starboard gap of about 12 meters long and seven to nine meters wide (This satellite imagery was taken on March 3, 2013).

These open-source finds are important as they seem to confirm what has long been assumed would eventually happen when a great power goes to sea: the emergence of an indigenous Chinese aircraft carrier program.

Most in the Chinese defense watcher community conclude that the photos are of what is known as the "001A" class. The ship appears to be a modified version of the 55,000 ton Soviet-era Admiral Kuznetsov class aircraft carrier, one of which China has refurbished into its current and only aircraft carrier, the Liaoning . This is important as it indicates that the new ship will use a conventional propulsion package, have the large, phased array radars already installed on the Liaoning 's island structure, and also have 40 to 45 J-15 fighters (Admiral Song Xue, deputy chief of staff for the People’s Liberation Army Navy, was quoted in April 2013 saying that domestic successors to the Liaoning would carrier more fighters).

An analysis of photos, along with other open source information, provides five other notable tidbits: 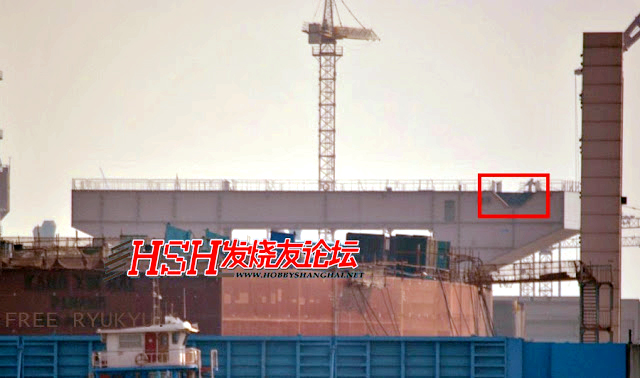 1) As seen in the first photo, the trench circled on the right side of the module in the third picture could potentially be installed with a catapult. If this "carrier" does have a catapult, it is likely that they will remove the ski jump ramp found on the Kuznetsov / Liaoning carriers to save weight. This likelihood is supported by the reports that China already has an active aircraft catapult research program and China is also conducting research on an Electromagnetic Aircraft Launch System, known as EMALS, which would be more energy efficient than traditional steam powered catapults. The significance of such a modified design is that it will provide the new class of carriers with an upgrade in capability; catapults allow the aircraft operating from the new ships to launch with greater payload and range than relying on sky jumps. 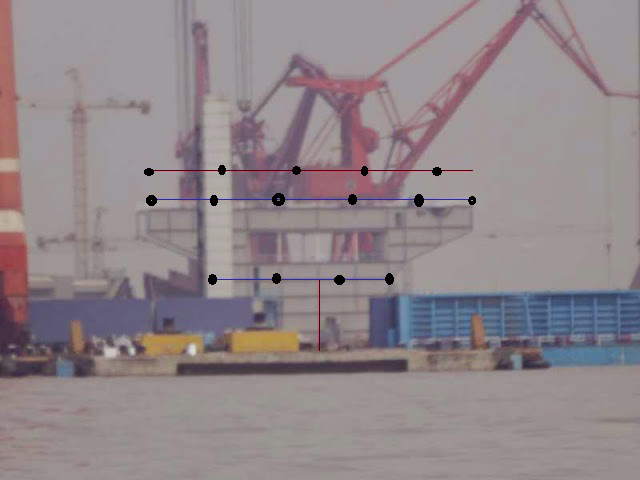 2) As seen on Google Earth, the gap on the left (facing outwards) measures around 12 meters long and seven meters to nine meters wide. It could be for an aircraft elevator (though this would be rather small, given that the Su-33 and its Chinese derivative J-15 have a folded wingspan of 7.4 meters, not to mention being nine meters too short for the 21 meter long Su-33/J-15). Alternatively, the gap could be to support the island superstructure and hold levels of the island superstructure that are located beneath the flight deck. 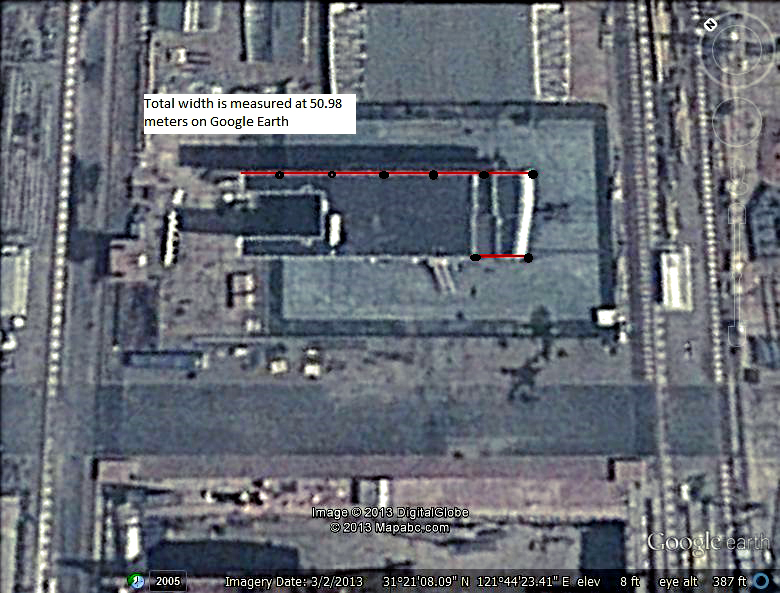 3) As seen on Google Earth’s picture of the Changxingxiang Jiangnan Shipyard, the mysterious module is about 50 meters wide. This is smaller than other CATOBAR (catapult-assisted take-off but arrested recovery) or STOBAR (Short take-off but arrested recovery) carriers. For instance, one of the world’s smallest carriers, the French Charles de Gaulle , has a beam 64 meters wide, while the USS Nimitz has a beam of 70 meters. Now, the Liaoning has a beam of 75 meters, but this module does not have flight deck mounted on yet, which could potentially extend the width of the carrier by 10 to 12 meters on each side to arrive at a 70 to 75 meter beam.

Related, the second photo suggests a waterline beam (blue line) width of about 30 to 35 meters (a ruler shows us that the waterline beam, located at the top of the fourth bulkhead row, has a ratio of about 3:5 to the whole module’s presumed 50 meter width).  That is close to the Liaoning 's waterline beam of 38 meters, especially if this module only shows the inner hull. If so, this is a good indication that the Chinese have chosen to make the 001A a double-hulled design, like the USS Theodore Roosevelt , to increase damage survivability against torpedoes. Indeed, a double-hulled design would seem attractive to China’s navy given their longstanding weaknesses in antisubmarine warfare. 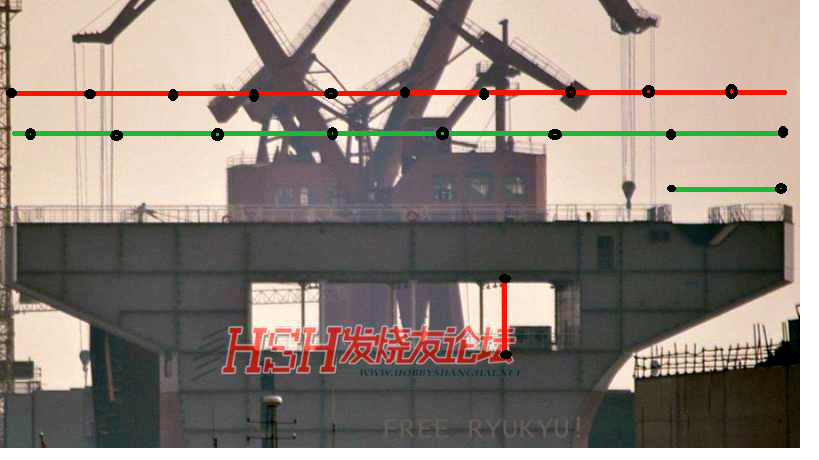 4) The opening in the middle of the module could be the carrier's hangar. It would have to be around seven to eight meters in height to accommodate the J-15/Su-33 naval fighter jet, which is 5.9 meters tall. This would also give it the capability to accommodate JZY-01 AEWC radar plane, Sharp Sword stealth UCAV and J-31 fighter (which is 4.5 meters tall) in the future. The bulkheads around it would presumably be for crew quarters, maintenance shops, flight ready rooms and storage.

5) The carrier would appear to have a draught of about 10 to 12.5 meters. This is calculated from looking at the second photo, the dark red lines show that the ratio between the keel-fourth bulkhead row and width of the whole module is 1:4.5. This is another indicator that the ship is not either civilian or an amphibious ship, but the aircraft carrier many suspect. For instance, the USS America -class LHAs have a draft of around 8 meters 4, while the 10-12.5 meters of the ship under construction is roughly equal to the Liaoning ’s draught of 10 meters.

While there is a great deal that can be learned from such photos, certainly far more than the grainy photos our forebearers had to use, they still certainly come with limitations. In particular, there are three significant caveats that need to be weighed in any analysis. 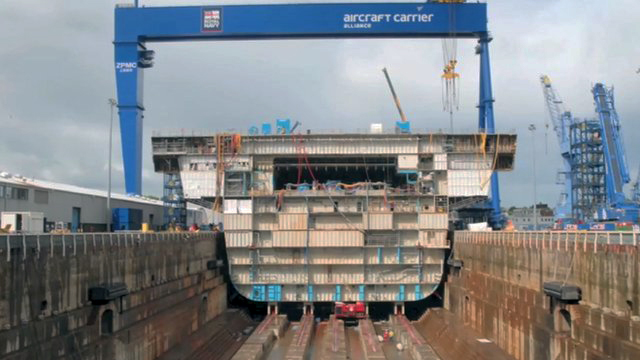 1) If the lifebuoys attached to the railing at the top in the first picture are sized to the international standard of 0.75-0.8 meters in diameter, they would indicate a ceiling of 4.0-5.0 meters in height for the purported hangar, if the photo is to scale. That would be too short for the J-15 fighter, which has a height of 5.9 meters. Of course, we don't have any definitive objects in frame to scale the dimensions of the "carrier" module at ground level view, which makes guessing the dimensions of the module to be highly problematic. JANES, for example, suggests that the hangar could become taller and wider in modular sections closer to the front of the 001A carrier, much like the British Queen Elizabeth class carrier’s design (whose hangar height varies between 6.5-7 meters to 9 meters).

Another matter is that the hangar could be 6.5 meters to seven meters. Using the Google Earth image, we can see that the ratios of the distance between the portside to the far edge of the trench (about 9 to 10 meters) and the module’s width whole are about 1:5.3 as of March (green lines).  But in the third photo, we see that the ratio has been expanded to about 1:6.3 or 1:7 (green lines), indicating that further work has extended the module’s width to 60 meters to 65 meters. Given a ratio of 2:10 for the hangar height to width ratio in the fourth photo (red lines), we can conclude a probable hangar height of 6.5 meters to 7.0 meters.

2) The deck elevator has a length of only 12 meters. That would not be big enough for the J-15 aircraft, which has a length of 21 meters. Of course, if this is a support structure for the island, then this point is moot. Alternatively, the Chinese could also modify the original Kuznetsov design to include a dedicated helicopter elevator (helicopters are smaller than fixed wing aircraft) or a dedicated drone elevator, leaving the J-15 fighters to use larger aircraft elevators. And if the module’s width is now currently 60 to 65 meters, it could add on 10 meters to make the elevator’s length to be 22 meters long; enough to accommodate the J-15 (still a rather narrow fit though).

3) The assumption of this being the 001A could be completely off. If so, there are then three other possibilities for the module: One, it could be a scaled down test mock up, to prove that Changxing Jiangnan can handle the complexities of aircraft carrier construction. However, this seems unlikely, considering the current ubiquity of CAD software for shipbuilding. Also, the module has been left in the open for at least five months. Presumably Chinese navy personnel would want to move any test module to a dedicated military facility for controlled evaluation and testing. Two, it could be for the Chinese Type 075 LHA. This also not likely, considering an overall 50 meter beam LHA would be enormous, larger than the USS America , and closer to the size of the Charles DeGaulle aircraft carrier. Since China already has the Liaoning , and replicating its basic hull should be well within China's modern shipbuilding capabilities, it is unlikely that they would go from a 55,000-65,000 ton carrier to a smaller and less capable 45,000-ton design. Or three, it could be for a civilian ship. This also seems unlikely, given the bridge island/aircraft elevator opening located on the side; most civilian freighters place the bridge superstructure towards the ship’s rear. Also, given the plethora of bulkheads in the module, if this were a civilian freighter, the bulkhead arrangement would not provide very much flexibility in transporting cargo.  And a comparison of photos show that this module has clear structural similarities to the cross section of the HMS Queen Elizabeth.

In sum, while there is a great deal can be learned from the sort of online treasure trove of open-source intelligence our forebears would be mystified by, nothing is proven. What is without debate is that, even if the module proves not to be the 001A, China’s navy is clearly making immense military investments, commensurate with its growing economic power, and thus gaining in its reach and capability. In addition to aircraft carriers, China is also adding new capabilities in amphibious warfare, stealthy manned and unmanned aviation, sophisticated guided missile destroyers capable of multiple missions including missile defense, new nuclear attack submarines. At the same time, it is shoring up longstanding weaknesses in naval helicopters and antisubmarine warfare aircraft (such as with the Y-8FQ maritime search aircraft).

This matters not just in any U.S.-China competition, but perhaps more so in China's relations with its neighbors. To put it another way, while the focus of recent U.S. military planning has been how to defeat “anti-access, area denial” capabilities, the extended reach allowed by such China’s naval power projection investments indicates that perhaps the U.S. and her allies should focus a bit more on AA/AD of their own.

Jeffrey Lin is currently a Senate Office volunteer and a former research intern at Brookings. Peter W. Singer is Director of Center for 21st Century Security and Intelligence at Brookings. The authors are much indebted to the participants at China Defense Forum and Sinodefence Forum for their insights on Chinese shipbuilding practices throughout the years.