Why the F100 Engine Is the Best Choice for the F-15EX
Skip to Content
Get all our news and commentary in your inbox at 6 a.m. ET.
Science & Tech
The Israeli Military is Buying Copter Drones With Machine Guns

A breakthrough in drone design gives a glimpse into the future of urban warfare.

The Israeli military is buying small multi-rotor drones modified to carry a machine gun, a grenade launcher and variety of other weapons to fight tomorrow’s urban warfare battles. Their maker, Florida startup Duke Robotics , is pitching the TIKAD drone to the U.S military as well.

Lt. Col. Raziel “Razi” Atuar, a 20-year veteran of the Israeli military and a reservist in the Israeli Special Forces, co-founded the company in 2014 along with a paratrooper-turned-robotic engineer and another IDF buddy. He says he was tired of watching his comrades die in chaotic street battles that also, sometimes, took the lives of civilians.

“You have small groups [of adversaries] working within crowded civilian areas using civilians as shields. But you have to go in. Even to just get a couple of guys with a mortar, you have to send in a battalion and you lose guys. People get hurt. The operational challenge, it bothered us,” Atuar said.

A former battalion commander, Atuar fought in several Israeli urban warfare operations, including 2014’s Protective Edge operation in Gaza — the kind the U.S. military believes will typify fighting in the decades ahead.

TIKAD, the company’s first product, is remotely operated. So a human would do the flying, targeting, and trigger-pulling from afar, and, thus, under less stress to shoot to protect him- or herself.

In the decade ahead, more and more tactical operations squads will send not humans but robots into standoff situations. The Marines are already training to new concepts of operations where lethal robots take the place of human door-kickers .

Local police departments, too, are increasingly choosing to send weaponized robots in the place of tactical squads, as happened last year when police in Dallas rigged a tracked ground robot to take out a shooter.

Aerial drones like quadcopters can often maneuver more easily in small spaces than the tracked ground robots of the sort that the Dallas police used. But physics does not allow the easy integration of a machine gun on a small aerial drone that also has to hover.

When a gun fires, expanding gases eject the bullet from its barrel with great force — and exert an equal and opposite force on whatever is holding the weapon. Newton describes this conservation of momentum — more commonly known as kickback or recoil — in his third law . When a person fires a pistol, the backward momentum is transferred through the shooter’s body into the ground. But a low-mass object hovering in the air, like a quadcopter, has no mount. The physical forces that pushed the bullet out of the barrel are going to act on the drone, more than likely knocking it out of position.

You might be able to rig a pistol to a quadcopter, as illustrated in this video, but the drone will move chaotically with every shot.

Through a system of flexibly connected plates, the TIKAD distributes the backward momentum in a way that keeps the vehicle stationary in the air. A ten-pound robot gimbal allows six degrees of movement freedom and the ability to rapidly re-target the weapon and camera.

“Because it’s a robot, it’s agnostic to the payload. I can mount an M4, SR25, a 40-millimeter grenade launcher, no matter what. I can carry up to 22 pounds and [the plate system] will stabilize the drone and allow me to get an accurate shot,” Atuar said. 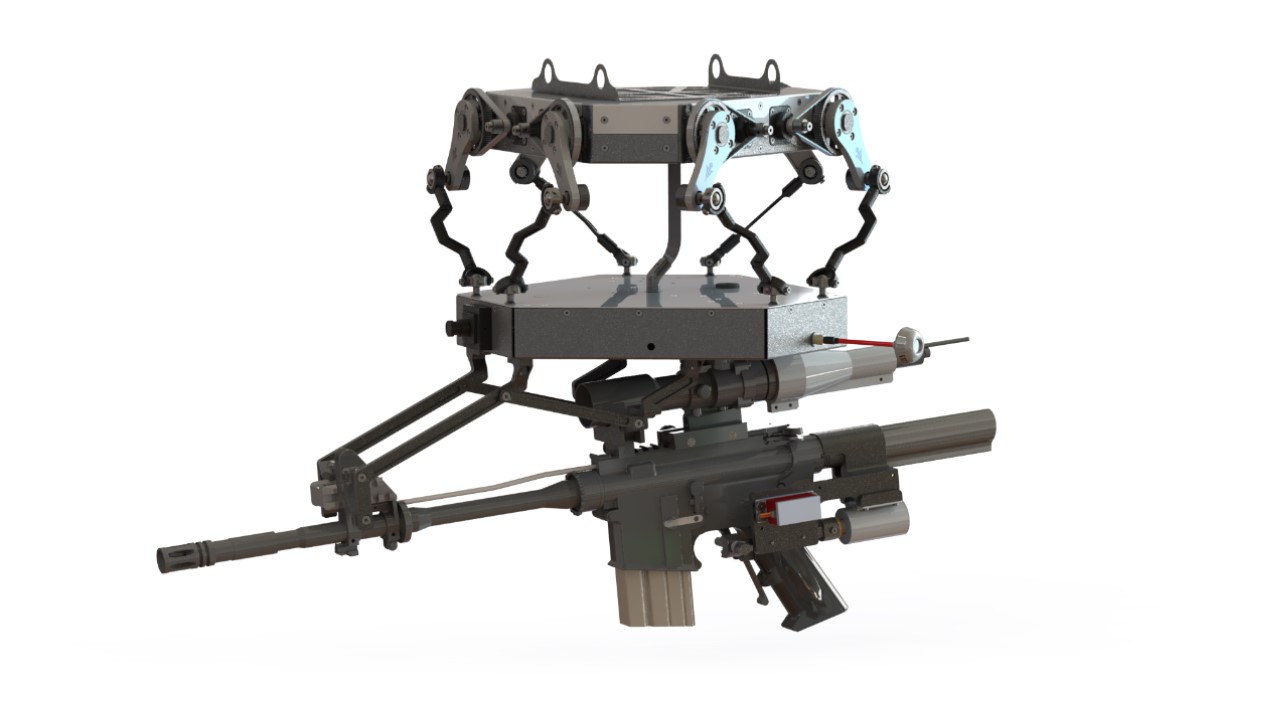 In 2015, Israeli Special Forces took out a target with a sniper rifle mounted on an off-the-shelf consumer drone supplied by Duke Robotics. The operation was a success, but Atuar and his colleagues weren’t entirely happy. Burdened with a 30-pound rifle, the drone was able to stay airborne for just five minutes. The sort of UAV you can buy on Amazon was not created to lug that kind of weight.

“From an operational point of view, I want to last much longer. You want to be able to reach the target and investigate it. I have to have time to gather information to be sure. That’s what the Israeli military has ordered from us,” Atuar said.

Defense One was able to confirm independently that the Israeli military is buying an unspecified number of the units. At press time, the Israeli Ministry of Defense had yet to respond to a request for comment.

The U.S. military has shown interest as well. Last year, the drone won accolades from the Combatting Terrorism Technical Support Office during a conference. The company is now based in Florida, not far from U.S. Special Operations Command and U.S. Central Command.