How Ethical Hacking Can Make DOD’s Weapon Systems More Secure
Skip to Content
Get all our news and commentary in your inbox at 6 a.m. ET.
Threats
The Russian Double Game Continues in Ukraine

Despite a pubic pledge to help de-escalate tensions, Vladimir Putin's unwillingness or inability to stop Russian weapons from flowing into the hands of separatists is only prolonging an already very deadly crisis. By David Rohde

As fighting intensifies in eastern Ukraine, signs are emerging that Russian President Vladimir Putin has adopted a twin strategy: pledge his willingness to support a negotiated settlement, but continue funneling arms to separatist rebels.

"Putin in the last several weeks has been playing a dual game," said Steven Pifer, a former U.S. ambassador to Ukraine and Brookings Institution senior fellow. "There have been things that suggest that Russia wants to help solve this diplomatically. ... But you’ve continued to see evidence that Russians weapons are flowing into Ukraine."

Three weeks ago, after months of bellicose rhetoric, Putin had Russia's parliament revoke his authority to use Russian military force in Ukraine. Then on Thursday, Putin issued a joint call with German Chancellor Angela Merkel and French President François Hollande for a ceasefire in Ukraine.

The cause of Putin's apparent change in tone is the focus of debate in Washington. Obama administration officials credit American and European sanctions with slowing both Russia's economy and Putin’s efforts to sow chaos in eastern Ukraine. But former U.S. diplomats contend that while two rounds of sanctions have helped, they're not the key factor in blunting Moscow’s designs. The successes of Ukraine's new government and failures of its separatists are the primary cause. "That’s first and foremost because of what the Ukrainians are doing," said Michael McFaul, who until February served as the Obama administration’s ambassador to Moscow and point man on Russia. 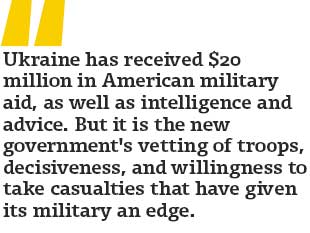 Ukrainian President Petro Poroshenko, elected in May, has done a surprisingly good job of turning Ukraine's military into a more effective fighting force. Ukraine has received $20 million in American military aid, as well as intelligence and advice. But it is the new government's vetting of troops, decisiveness, and willingness to take casualties that have given its military an edge.

On Monday, Poroshenko accused Russian military officers of fighting alongside separatists. A missile that downed a Ukrainian transport plane carrying eight people near the border was probably fired from Russia, Ukrainian officials said. And on Friday, Ukrainian officials said a Grad missile attack that killed 23 Ukrainian soldiers showed that Russian arms are flowing to rebels as well. Russian officials deny supplying or aiding the rebels.

The situation remains volatile. Poroshenko and Putin could be drawn into a dangerous tit-for-tat cycle as the fighting intensifies. Tensions rose on Sunday when Russian officials threatened Ukraine with "irreversible consequences" after a Russian citizen was killed by a shell fired across the border from Ukraine. Kiev said the accusation that its forces had fired across the border was nonsense and suggested the attack could have been the work of rebels trying to provoke Moscow to intervene on their behalf. The rebels denied they were responsible.

Poroshenko’s strong performance since taking office has been a key factor in blunting Moscow, said Eugene Rumer, who served as the national intelligence officer for Russia and Eurasia at the U.S. National Intelligence Council from 2010 to January 2014. While offering to hold peace talks, Poroshenko has mounted decisive military action against the separatists, Rumer added. At the same time, Poroshenko has taken a softer line against Putin himself. "I was pleasantly surprised when he spoke out against further sanctions against Russia," said Rumer, now a Russia expert at the Carnegie Endowment for International Peace. "He was statesmanlike. He was signaling to the Russians that he’s willing to make a deal. And that is significant." 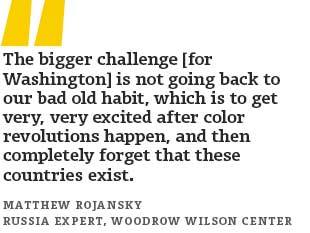 Matthew Rojansky, a Russia expert at the Woodrow Wilson Center, cautioned that time may be on Putin's side. He said Washington had a long history of focusing intently on any anti-Moscow uprising, typically known as a "color revolution," and then quickly shifting its attention elsewhere. "The bigger challenge is not going back to our bad old habit, which is to get very, very excited after color revolutions happen," Rojansky said, "and then completely forget that these countries exist." Putin knows that, he added, and is playing a long game to Washington’s short game.

Thomas Graham, who was the National Security Council’s senior director for Russia under President George W. Bush, argued that Putin has never wanted to invade and annex eastern Ukraine. Instead, his goal has been to maintain influence over Ukraine’s government. "I thought all along that the goal really was to have leverage on the government in Kiev," Graham said. "And to ensure at a minimum that it’s not hostile and it’s not moving quickly toward Europe."

Pifer, the former ambassador to Ukraine, said there is a danger Poroshenko will be too aggressive militarily. Ukrainian forces re-took Slovyansk, a city of roughly 130,000, earlier this month. But Pifer argued that regaining control of Donetsk—an industrial city of 900,000 where separatists are digging in for a last stand—would be far more difficult. Any military operation that kills large numbers of civilians—or separatists—could shift public opinion against the Ukrainian government. "It’s also important that Poroshenko not overplay his hand," Pifer said. "You don’t want a military operation that turns the population against you."

"If they get slaughtered or routed," said Weiss, "there will be a lot of pressure on the Russian government to react."

NEXT STORY: Why Hamas Chooses Rockets Over Nation Building