Building Stronger Public Health through the Pandemic and Beyond
Skip to Content
Get all our news and commentary in your inbox at 6 a.m. ET.
Threats
China Just Conducted Its Biggest-Ever Display of Naval Power

It involved 48 warships, 76 aircraft, and more than 10,000 personnel in the South China Sea, plus an onboard speech by president Xi Jinping in military fatigues.

China’s military put on something of a show in the contested South China Sea this week. In its largest-ever maritime exercise, the People’s Liberation Army sent forth 48 warships, 76 aircraft, and more than 10,000 personnel, with president Xi Jinping making an appearanceyesterday to watch the proceedings and address the troops.

Speaking aboard a destroyer and dressed in military fatigues, Xi reiterated the goal of transforming the nation’s navy into a world-class force, adding, “The mission of building a mighty people’s navy has never been more urgent than it is today.” 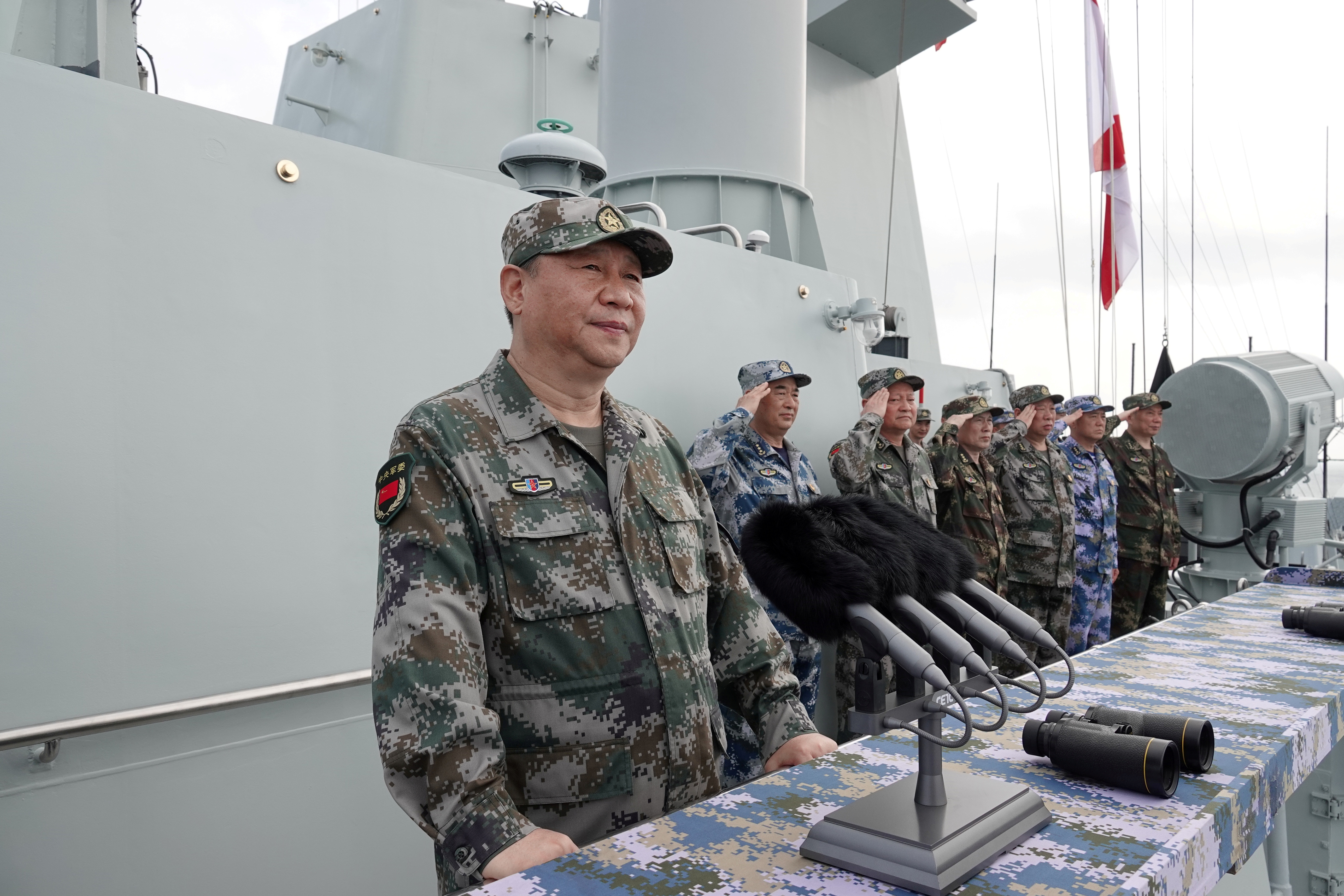 Chinese president Xi Jinping delivers a speech in the South China Sea on April 12. (Photo via Chinese Ministry of Defense)

China’s military technology has been rapidly advancing under Xi. In February admiral Harry Harris, head of the US Pacific Command, warned lawmakers that “China’s impressive military buildup could soon challenge the United States across almost every domain.”

Meanwhile China announced yesterday it will hold live-fire drills in the Taiwan Strait next week on April 18.

This week’s exercises, heavily promoted in state media, were partly about stirring patriotism in China. Xi’s appearance in fatigues in a photogenic military setting brought to mind his much-publicized review of land forces last summer in sand-swept Inner Mongolia, with clouds of dust creating a battlefield-like atmosphere. Chinese-made military movies such as last year’s blockbuster Wolf Warrior 2 have tapped into China’s swelling pride as a nation.

China also made a rare acknowledgment this week that it is indeed militarizing the sea’s Spratly islands. That followed news the country has deployed jamming equipment to its base at Mischief Reef, which started off as a “fishermen’s shelter” in the mid-1990s—or so China claimed to a nervous Southeast Asia at the time. It now features an airfield, hangars, radars, and air-defense weapons, all quite near the Philippines. 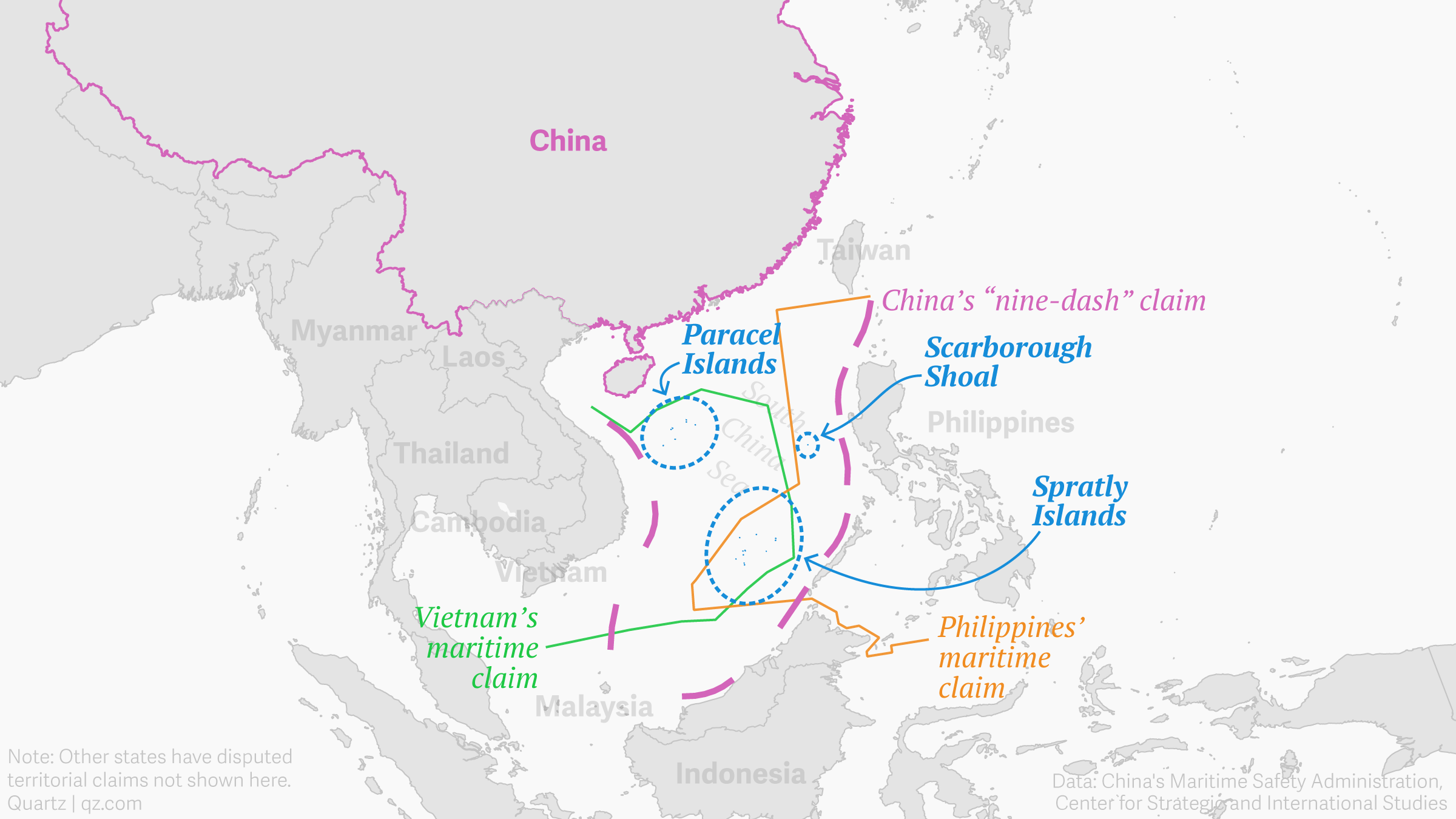 China claims nearly the entire South China Sea based on its “nine-dash line,” ignoring a 2016 ruling by an international tribunal that invalidated the claim. The line intersects with the exclusive economic zones of surrounding nations, a number of which have their own claims in the sea that conflict with China’s.

One of them is Vietnam, which released a draft law this week to give its coast guard more flexibility to open fire at sea. That coast guard is now armed with modern patrol boats from the US and Japan, both alarmed by China’s growing assertiveness. Last month saw the first visit by a US aircraft carrier to Vietnam since the war between the two nations 1970s, with Hanoi and Washington sending a message to Beijing.

This week the US made another display of might in the South China Sea, with the aircraft carrier USS Theodore Roosevelt making its way to Manila. It’s also conducted several freedom-of-navigation challenges to Beijing’s territorial claims this year, as it’s done in the past.

Other nations are also alarmed by China’s maritime moves. On April 9, Australia’s Fairfax Media reported that Beijing has approached the island nation of Vanuatu in the South Pacific about China possibly building a naval base there. Both China and Vanuatu denied the report, but many have taken it seriously.

Among them is Gerald Howarth, former UK minister for international security strategy. He told Fairfax this week that China’s assurances that it poses no threat to the world order cannot be trusted: “China’s actions speak louder than words… What matters is not intentions, but capabilities because intentions can change overnight, capabilities cannot.”