Two aircraft are on President Trump’s radar. Here’s how they’re different, and why it matters to more than just power players in Washington.

The U.S. Navy is buying the F-35C Joint Strike Fighter; the question now is how many.

Both the Navy and Marine Corps plan to use the F-35C, a version of the jet that can fly from large aircraft carriers. But Pentagon officials are considering scaling back F-35 purchases in favor of Boeing’s Advanced Super Hornet aircraft—and President Donald Trump gave that push some more momentum when he hinted at a large Super Hornet buy Friday at a Boeing factory in South Carolina.

The F-35-vs.-Advanced Super Hornet debate has been around since at least 2013, when Boeing conducted the first tests of their jet. While much of the debate has focused on whether a souped-up Super Hornet could replace the carrier version of the F-35, recent comments from top military brass reflect a desire to buy both.

The debate was given new life in late January, when Trump signed an executive memo calling for a review of the F-35 program, a long-delayed, multi-national weapons project dating back to the ’90s with an estimated cost of $379 billion. The president’s memo was the follow-through on a Dec. 22 tweet:

Based on the tremendous cost and cost overruns of the Lockheed Martin F-35, I have asked Boeing to price-out a comparable F-18 Super Hornet!

Defense Secretary James Mattis subsequently ordered up “a review that compares F-35C and F/A-18E/F operational capabilities and assesses the extent that F/A-18E/F improvements (an advanced Super Hornet) can be made in order to provide a competitive, cost effective, fighter aircraft alternative.”

We took a look at the dominant features and limitations of each to see how they stack up.

The Advanced Super Hornet — which some military officials have called a Block III Super Hornet, a reference to the designator it would be given to differentiate it from regular Super Hornets — is a carrier-capable, strike and fighter jet packed with advanced sensors to attack air and ground targets. Perhaps it’s best feature is that it is, essentially, an upgrade package for existing aircraft.

The Super Hornet can fire weapons from nearly a dozen different stations — two on the wingtips, six under its wings, and three under the fuselage. The Advanced model adds enclosed stations to reduce the chances of being spotted by newer, extended-range radars.

It can fly with a jammer to disrupt an adversary’s communications, along with an infrared tracker and electronic warfare sensing pods. Its advanced systems can share targeting data with friendly aircraft, similar to the F-35’s, though it isn’t networked with nearly as many ships and aircraft as the Joint Strike Fighter.

One reality check for the Hornet series: 62 percent of the Navy’s upgradable F/A-18s are out of service for major repairs or parts shortages attributed to a lack of funding, service officials told Defense News in early February. Another concern: F/A-18 Hornet pilots suffered a series of accidents in 2016, including nine crashes in the final six months of the year, temporarily grounding the fleet as recently as mid-December. To date, no common cause has been found.

In spite of the Advanced Super Hornet’s many upgrades, it is still limited by that aircraft’s design, which was a power-packing product of the pre-stealth era.

The F-35C’s list of selling points begin with just that. It is a stealth, carrier-capable, network-enabled, sensor-packed strike fighter jet. In other words, it was designed to carry out a high-precision strike without having to rely on long-range weapons like a Super Hornet would.

The F-35 was never meant to best the Super Hornet point-by-point — though it, too, has 11 weapons stations. The Joint Strike Fighter program was designed to produce a one-size-fits-all jet that could be customized for each service. Its electronic warfare capabilities took up much of the developers’ attention and time. Between the production floor and the flight line, integrating all the promised next-generation systems into one aircraft has been problematic, contributing to delays as various gear and software required upgrades and debugging. The entire fleet has been grounded more than a dozen times between 2007 and 2016 for problems with engine blades and other components.

By the numbers, the two aircraft differ slightly in speed: the Super Hornet can travel at Mach 1.8, whereas the F-35 tops out at Mach 1.6; and combat radius: Advanced Super Hornets are said to range more than 700 nautical miles while F-35Cs top out at 600. The F-35C variant has larger wings and stronger landing gear than the other models, giving it more options with aircraft carriers. Its wingtips also fold for tight spaces on deck.

Taken together, many observers view the F-35-vs-Super Hornet debate as an apples-to-oranges diversion. The aircraft are just too fundamentally different.

Given the F-35’s famous delays, it’s fair to wonder: Is the F-35C even ready? The Navy’s not planning on it earlier than February 2019.

Now to the money

F-35Cs run $122 million apiece, according to the most recent figures from the F-35 Joint Program Office. The U.S. Navy has purchased 30 of its planned 260 F-35Cs, while the Marines have bought 10, six of which are are being used for training, Marine Lt. Gen. Jon Davis told defense writers early February in Washington.

“I’ve probably got the most experienced F-35 pilots in the Department of the Navy on my staff right now,” Davis said.

By contrast, F/A-18E/F Super Hornets cost nearly $70 million in fiscal year 2016. What would it cost to upgrade them to Advanced Super Hornet? Maybe a few million dollars, but officials don’t seem to know yet. It’s a critical question in the debate, and some analysts think the costs could be so great that it might be more expensive than to stick with the F-35 to the end. As Bryan Clark, naval analyst Center for Strategic and Budgetary Assessments, told USNI News in January, “If you’re saving just $10 million an airplane, it might not be worth switching horses midstream.”

The Navy maintains more than 550 Super Hornets, along with nearly 700 of the older F/A-18A through -D variants (the Navy has 455; the Marines, 237), according to a November report from the Heritage Foundation. Even with the current 62-percent shortfall, that’s still a lot of Hornets that might be brought back to life. But it’s far short of the total buy of 2,443 F-35s planned through the mid-2030s.

The Pentagon’s review will “probably end up validating the imperative to have a fifth-generation aircraft out there in the battles that loom” ahead, Lt. Gen. Davis said. “We’ll let Boeing and Lockheed basically make their case for what they think they can do,” he said. “We’ll study that apples to apples…across the mission sets.”

The less dramatic option would be to stay the course with the F-35 program, and backfill gaps from delayed production with Super Hornets. After all, the two aircraft were already intended to work in tandem as squadrons. This is an approach Chief of Naval Operations Adm. John Richardson has pushed for months, asking Congress last March to buy an extra two- to three-dozen Super Hornets in the years ahead to backfill for F-35 delays. Congress ok’d just 2.

In the 11 months since, the stress on the Super Hornet fleet has only grown—and the Navy is back again this year with another request for two dozen Super Hornets. For CNO Richardson, the short-term priority is clear: “As we flow money in, the throughput of our aviation depots is going to be a key part of particularly our legacy Hornets, getting those back online,” he said at a Defense One event in January.

He noted “a prompt jump in capability” from the Advanced Super Hornet to the F-35. The Navy’s “carrier air wing will be comprised of fifth- and fourth-generation fighters sort of into the foreseeable future…We’ve always sort of had a mixed approach to that going forward. We need the F-35. That is our fifth-generation capability, which we need to be competitive, but that’ll be supplemented by a health cadre of advanced Super Hornets as well.”

The F-35 program involves more than 1,200 suppliers “responsible for more than 146,000 direct and indirect U.S. jobs” in at least 45 U.S. states, as well as Italy, Japan and Puerto Rico, according to Lockheed. (See also this LA Times graphic)

Already in 2017, President Trump has claimed to have saved the F-35 program $700 million, so it would seem he’s warming to the program. Will Secretary Mattis’s review put an end to the debate once and for all, or will it forge a middle path for Boeing, Lockheed, the Navy and the president? With more than $300 billion on the line, it promises to be the biggest deal of Trump’s life—and a defining signal of American military power in the decades to come. 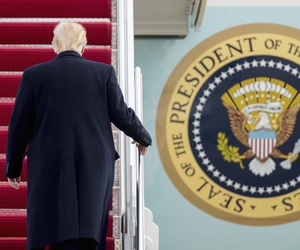 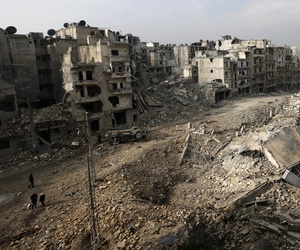 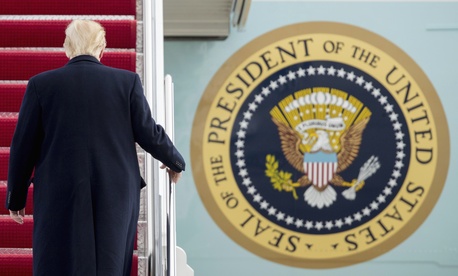 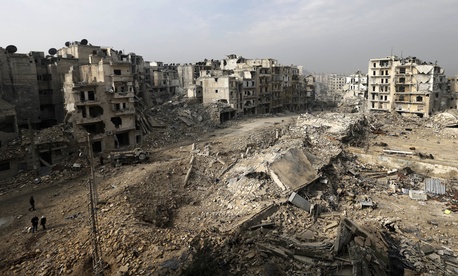