Building Stronger Public Health through the Pandemic and Beyond
Skip to Content
Get all our news and commentary in your inbox at 6 a.m. ET.
Ideas
It’s Time to Sink the Littoral Combat Ship

Things that seem too good to be true usually are, and so it is with the LCS. By Jacob Marx and William D. Hartung

It is more important than ever that the Department of Defense spend taxpayer money wisely as the United States economy struggles and the Pentagon budget comes down from its post-World War II peak. This is particularly true for the Navy, which many strategists see assuming an expanded role in protecting U.S. global economic and security interests. Though the optimal scope of the Navy’s mission is up for debate, it’s clear that U.S. leaders envision diverse objectives requiring diverse maritime capabilities. What should be equally clear is that there is no need for the littoral combat ship.

On paper, the Littoral Combat Ship, or LCS, is the high tech, multipurpose answer to the Navy’s 21st Century needs. It is supposed to be fast, maneuverable and able to operate in shallow water. And it is built to adapt to different tasks through a system of exchangeable weapons and equipment, known as “mission packages.” The Navy asserts that an LCS should be able to sail into port and head back to sea in 96 hours, refitted with a completely new payload. This would have allowed the LCS to replace a slew of small and medium warships, 56 at last count. Most importantly, at a projected price tag of $450 million for one sea frame and three mission packages, it appeared to offer three ships for the price of one.

Things that seem too good to be true usually are, and so it is with the LCS. Designing a weapons system for a dozen missions makes it good at none of them. Such inherently flawed requirements balloon costs, in this case to a staggering $780 million for one sea frame with two mission packages. This, for a ship that is too big to be a corvette (usually costing around $200 million each), too lightly armed or armored to be a destroyer (costing around $1 billion each) and too overweight to be upgraded through a full service life. And in one war game the LCS’s mission packages took several weeks to exchange due to the time it took to get all of the appropriate equipment and personnel to the dock. The full extent of the problems with the LCS remains unknown. With 11 years gone and six ships built, the Navy has still not conducted formal testing for the ability to operate in rough water, withstand an explosive shock or for total ship survivability.

How did this happen? There are three main reasons.

First, DOD issued contracts with unworkable and often conflicting requirements. There is simply no need to have a ship the size of the LCS that can do 40 knots. Traveling at that speed takes too much fuel, makes the ship no safer from missiles or torpedoes and creates weight and balance problems. And while commonality of parts could in theory make it easier to train crews and repair damage to LCS, the Navy itself undercut that rationale in 2007 when it decided to buy two different ships with different designs, yet both dubbed LCS. 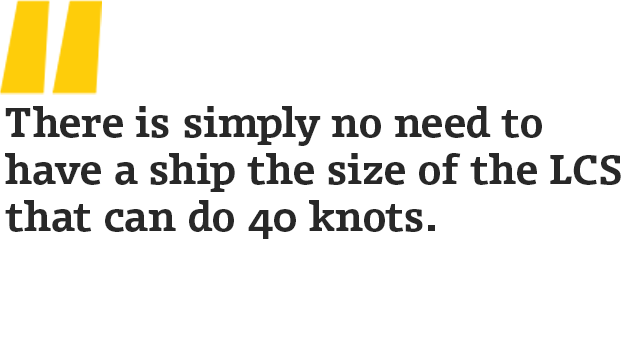 The second reason the LCS shipbuilding program has gone so far off course is inadequate oversight. Congress should include a requirement that all major capabilities of a ship are adequately tested before it goes into full-scale production, and that contractors bear a larger burden of the financial risk if the systems don’t work.

Finally, the common defense industry practice of putting in unrealistically low bids as a way to win a major government contract must end. If the Defense Department would more rigorously scrutinize those initial bids, it would be easier for Congress and the public to decide whether the weapon is worth the cost.

In February, Defense Secretary Chuck Hagel cut the planned LCS purchase from 52 to 32 ships and authorized the Navy to identify more “capable and lethal small surface combatant” alternatives. The results of that report, which Hagel intended to deliver to Congress before the August recess, remain embargoed at the Pentagon.

Real oversight of the LCS is long overdue. It’s time to acknowledge that those ships are a detriment to naval readiness and a bad deal for American taxpayers.

Jacob Marx is a research associate at the Center for International Policy and the author of a new issue brief on the LCS. William D. Hartung is the director of the center’s Arms and Security Project.

NEXT STORY: Obama Insiders Frustrated Over Reluctance to Attack Syria and Iraq