Here’s How Multi-cloud Is Driving the Future of Government Work
Skip to Content
Get all our news and commentary in your inbox at 6 a.m. ET.
Ideas
Beijing Is Setting the Stage for War in the South China Sea

China is setting itself up to be repeatedly provoked in the disputed waters—it might even be counting on it.

Consider the nation’s manmade, militarized island at Fiery Cross Reef in the Spratly archipelago. Though it didn’t even exist a few years ago, and for decades ships from other nations could routinely sail by it without disturbance, now Beijing feels provoked if anyone goes near it—and sends out warnings or makes aggressive gestures in response.

This week the USS William P. Lawrence , a guided missile destroyer from the US Navy, conducted a “freedom of navigation” operation near the island. It deliberately sailed within 12 nautical miles of Fiery Cross Reef. If the US recognized the reef as China’s territory to begin with—which it does not— that would be considered entering China’s territory. 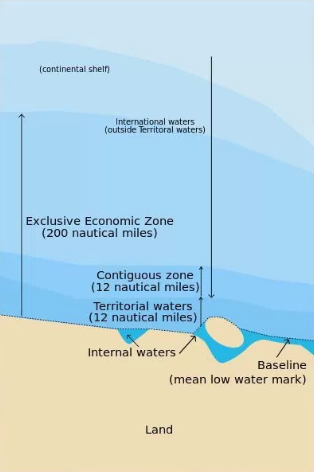 The problem is China has claimed, outrageously, that nearly the entire sea is its own territory. Considering the fact that some $5 trillion in ship-borne trade passes through the strategic waterway every year, that’s a problem not just for the US, but any number of countries participating in the global economy. The US Navy’s operation was a reminder to China that the sea is open waters, despite any impromptu islands that might have been constructed of late.

China bases its sea claim on a “nine-dash line” that it drew on a map after World War 2. Never mind that the line conflicts with international norms and overlapping claims by nearby nations, including the Philippines, Vietnam, and Malaysia, nations whose coasts are much closer to the disputed sea than China’s.

Many observers feel it’s ridiculous to base real-world claims on such a map. Internet satire has ensued.

The problem is that China is actually serious, however surreal the claim may seem.

From a military strategy point of view, at least, it’s easy to see why.

The strategic waterway is “one of the most important oil and natural gas transport choke points in the world,” geopolitical analyst Tim Daiss wrote this week in Forbes . Passing through it each year, he noted, is almost 60% of Japan’s and Taiwan’s energy supplies, and 80% of China’s crude oil imports.

Were a conflict involving these or other nations to break out, control of the sea could give Beijing a distinct advantage in securing—or blocking—the energy needed to power a war machine. The most critical resource that Japan lacked in World War 2 was oil—a key history lesson surely not lost on China’s military strategists. (The sea is full of its own vast untapped reserves of oil and natural gas, too.)

To acquire the sea’s strategic advantage, though, China first needs to establish control over the waterway. That needs to be done step by step. The process might go something like this:

China isn’t just relying on its military. The country has a massive fishing fleet, and by far the world’s largest fish industry. For years Beijing has been paying fishing boats to operate near its disputed outposts in the sea, even if they don’t catch much in the area. It certainly helps appearances.

The fishing fleet needs to expand outward because through over-fishing it has nearly depleted the fishing stock near China’s own shores. So it increasingly needs to fish in the exclusive economic zones of other nations, as it is doing . By establishing outposts and more control over the sea, China’s military can better support the fleet’s forays into distant or contested waters.

Those fishing forays often involve confrontations with foreign coastguards or navies. (Hey, more potential provocations!) With other nations responding by beefing up their maritime forces and monitoring technologies— networked nano-satellites , in the case of Indonesia—more such confrontations can be expected in the future.

Beijing has also whipped up patriotic feelings in the Chinese population about the sea being the nation’s birthright. A warship recently took a song-and-dance troupe on a tour of various disputed outposts in the sea. It started at Fiery Cross Reef, where celebrity singer Song Zuying gave a stirring rendition of a song called “Ode to the South Sea Defenders.”

State media coverage of the event included an interview with a navy officer from the audience telling CCTV after the performance, “We’ll definitely not lose at our hands an inch of the territories our ancestors left us.”

The TV coverage offered glimpses into just how impressively far along the island construction has come in a short time. The island even has runways suitable for fighter jets. This suggests China is well into Step 4 above. And indeed, it’s grown increasingly stern in its responses to “provocations.”

When a US Navy warship passed by the Spratlys last October , China simply warned it against acting irresponsibly. But this week when another warship did the same thing, it sent fighter jets scrambling and shadowed the US ship with its own warships—thanks in part to the convenient military base nearby.

Even talking about China’s activities in the sea—in diplomatic settings — now draws ire from Beijing. In April it warned G7 leaders meeting in Japan to not discuss the matter at all, and then said it was “strongly dissatisfied” after they did anyway.

Last week, one Chinese diplomat warned that criticism of China’s actions in the sea would rebound like a coiled spring . If comments are “aimed at putting pressure on China or blackening its name, then you can view it like a spring, which has an applied force and a counterforce. The more the pressure, the greater the reaction,” said Ouyang Yujing, director-general of the foreign ministry’s department of boundary and ocean affairs.

In other words, Beijing is pressing its outrageous claims in the South China, and will take any opposition as a reason to press them even harder.

One US commander is having none of it. Admiral Harry B. Harris Jr., in charge of military operations in the Asia-Pacific region, says China is “clearly militarizing ” (paywall) in the sea. “You’d have to believe in a flat earth to think otherwise,” he said in one appearance before Congress.

China knows it can’t go it alone, though, and it can muster some diplomatic chumminess when merited. It’s been attempting to enlist allies —including Gambia, of all nations—ahead of an international tribunal’s ruling on its sea claim that won’t likely go its way.

The Philippines brought a legal challenge against China’s claim in January 2013 to the Permanent Court of Arbitration, in The Hague, under the United Nations’ Convention on the Law of the Sea. The court was established in 1899 and has settled numerous maritime disputes between nations. China has refused to recognize its authority—probably because it knows it doesn’t have much of a case for its claim. The court is widely expected to rule in the Philippines’ favor.

Meanwhile, in a neat bit of logic, China’s defense ministry used this week’s US freedom of navigation operation to justify its militarization of the Spratly—or what it calls the Nansha—islands. The operation “again proves that China’s construction of defensive facilities on the relevant reefs in the Nansha islands is completely reasonable and totally necessary,” its defense ministry said .

Thanks to its own actions, China has been provoked, and is building a case to respond even more outrageously—now or in the future.

NEXT STORY: The DIUx Is Dead. Long Live The DIUx