Building Stronger Public Health through the Pandemic and Beyond
Skip to Content
Get all our news and commentary in your inbox at 6 a.m. ET.
Ideas
Why the Space Force Is Just Like Trump University

The gap between the hype and reality of the proposed new branch of the military makes the project almost entirely an exercise in misleading branding.

David A. Graham,
The Atlantic

By David A. Graham

Late Thursday morning, after playing a round of golf and firing off an angry missive about the Russia investigation, Donald Trump wrote this:

Space Force all the way!

The tweet is a perfect synecdoche for the program in question: short, punchy, and memorable, but ultimately substanceless. The Space Force and the White House’s rollout for it are the most focused exercises in Trumpian branding the nation has seen since the president took office, a project reminiscent of Trump University. Trump is selling the public one idea—a glitzy, pathbreaking new wing of government—and giving them instead a potentially kludgy reorganization of existing government functions.

Trump first announced the Space Force, which he says will be a sixth, co-equal branch of the military, in June, at the time he signed a space-policy directive. But that directive didn’t even mention the Space Force, nor was it totally clear how it would work. As my colleague Marina Koren has reported, many top commanders in the military (including Secretary of Defense James Mattis) opposed the plan, arguing that the Pentagon already had the right infrastructure in place to achieve what Trump wanted: the ability to defend American interests in space. There’s even an existing Air Force Space Command.

Of course, bureaucratic maneuvering isn’t as sexy as the first new branch of the military since 1947. The actual function of the Space Force isn’t nearly as sexy as its name implies, either. As Vice President Mike Pence outlined in a speech Thursday announcing a new Pentagon report on the project, the Space Force is not so much about sending battalions of armed astronauts into the atmosphere as about satellites and space-based defense systems. Those functions are potentially important, and American adversaries are interested in making plays for space weapons, but the Defense Department is already working on them.

When Pence complained Thursday that “while our adversaries have been busy weaponizing space, too often we have bureaucratized it,” he was protesting too much. Even though what Trump is proposing is basically a reorganization of existing systems, he has treated it as though he is launching something unprecedented. (The Space Force also can’t go forward unless Congress authorizes it.)

Later on Thursday, the Trump reelection campaign sent an email inviting supporters to vote on a logo for the Space Force. Here are the options: 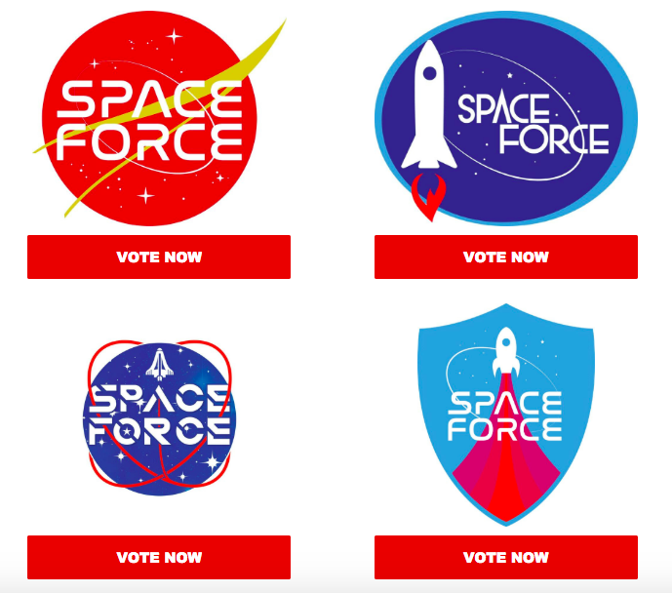 Some of these logos are pretty cool, and others are derivative. But they’re almost all misleading, especially the “Mars Awaits” one. You’d think from these designs that the Space Force is preparing for interstellar travel, rather than launching unmanned satellites into Earth’s orbit. The United States already has an agency in charge of space travel: nasa, whose classic logo many of these imitate. (My colleague James Fallows points out that the Air Force Space Command already has a perfectly good, if dated, logo.) But making a workaday defense agency into an avatar of, well, Avatar is all part of the ploy.

Once someone has voted in the poll, naturally, they are invited to donate to Trump’s reelection. That leads to a natural complaint: The Trump campaign appears to be selling the logo rights to the Space Force in exchange for campaign donations, turning the government into a tool for Trump’s own political enrichment.

The reality is much more pedestrian, and more characteristically Trump-y. What the campaign email is selling is not access and influence, but the illusion of access and influence—an even better scheme, since it demands nothing real in return. The vote will likely have no real effect on the eventual logo of the Space Force, should Congress approve it. That’s only fitting for a president who campaigned as a populist but has governed by, and to the benefit of, the wealthy and powerful.

Such salesmanship is not new for Trump. The branding of the Space Force resembles nothing so much as Trump University. In that program, Trump gussied up a series of drab, clichéd get-rich-quick real-estate seminars by giving it the name and crest of a full-fledged university and promising “handpicked” instructors. It was not a university, nor were the instructors handpicked. In depositions about the project, Trump proved far removed from any of the actual operations, repeatedly saying lieutenants had dealt with this or that matter.

Overpromising and underdelivering were staples of Trump’s business career—see all the allegedly sold-out luxury buildings that turned out to be undersubscribed or dubiously constructed. Those have become signature moves during his presidency, too. Take his summit with Kim Jong Un in Singapore, which produced tremendous fanfare but, as becomes clearer each day, little in the way of concrete agreements, despite the president’s claims. The same goes for Trump’s border wall, which is the subject of repeated announcements of new construction, even though none has started.

But the Space Force is the purest expression of the branding maneuver, given the mismatch between the hype (“Mars Awaits”) and the reality (“It is imperative that the United States adapts its policies, doctrine, and capabilities to protect our interests,” as the new report put it). Anyone tempted to get excited about the Space Force would be well advised to keep the Trump University precedent in mind. The seminars were a short-term success: Thousands of people signed up, creating a new revenue stream for Trump. But they eventually wised up that they weren’t buying real-estate secrets so much as a bill of goods, and some of them sued him, resulting in a $25 million settlement. Eventually, misleading branding schemes have a tendency to fall back down to Earth.

NEXT STORY: Ep. 15: Space Force is happening; The future of ISIS in Africa; Charlottesville, one year later; and more.