Veterans Affairs Secretary Eric Shinseki, the quiet former four-star Army general and Vietnam veteran, took his place at a Senate hearing table to answer complaints about the VA system, as he has done many times since taking office in 2009. This time, appearing more passionate than ever and facing cries for his resignation, the general faced allegations that 40 veterans had died waiting for appointments at a VA hospital in Phoenix, Ariz., and that hospital employees across the country have been keeping secret waiting lists to cover up the backlog of appointments.

“Any allegation, any adverse incident like this makes me mad as hell. I could use stronger language, Mr. Chairman, but in deference to the committee, I won't,” Shinseki, a wounded combat veteran, told a packed hearing room on Thursday. “But at the same time, it also saddens me, because I understand that out of those adverse events, a veteran and a veteran's family is dealing in the aftermath, and I always try to put myself in their shoes.”

The VA’s inspector general is investigating the accusations but says his report won’t be ready until August.

During his tenure, Shinseki has confronted complaints of late GI Bill payments, an increase in the backlog for benefits and health care, and claims that 22 veterans are committing suicide every day. The secretary also has faced criticism throughout that he’s been too “invisible,” as one veterans group put it. Before his Senate hearing, the group urged Shinseki to stand up and fight for the 6.5 million veterans in the VA healthcare system. “What we need to see is impassioned and aggressive action from the secretary,” Iraq and Afghanistan Veterans of America Chief Policy Officer Tom Tarantino said. “Yet he is almost entirely invisible, and the only time we hear from him is when somebody calls for his resignation, which is absolutely ridiculous, and it does not serve the veterans that need care at the VA.”

At the hearing, Shinseki was more candid than he has ever been in a public setting. “If there's anything that gets me angrier than just hearing allegations is to hear you tell me that we have folks that can't be truthful because they think the system doesn't allow it,” he said.

Richard Griffin, acting inspector general of the Department of Veterans Affairs, is in charge of investigating whether secret wait lists – supposedly created to make it look like the VA was chipping away it its massive backlog – contributed to the deaths of any of the 40 veterans. So far, he said, his team hasn’t found any evidence that long wait times for appointments caused any veteran to die. “We are not going to rush to judgment,” Griffin said.

His investigation has since expanded to VA hospitals in Cheyenne, Wyo., and at Fort Collins, Colo., and could reach other VA facilities. There are now claims that there were secret waiting lists, created to “cook the books” to show that waiting times for appointments were under control, at VA hospitals in St. Louis, Chicago, Austin, San Antonio, Burlington, Vt., Pittsburgh, Durham, N.C., Columbia, S.C., Atlanta, Augusta, Ga., and Jackson, Miss., according to the American Legion. 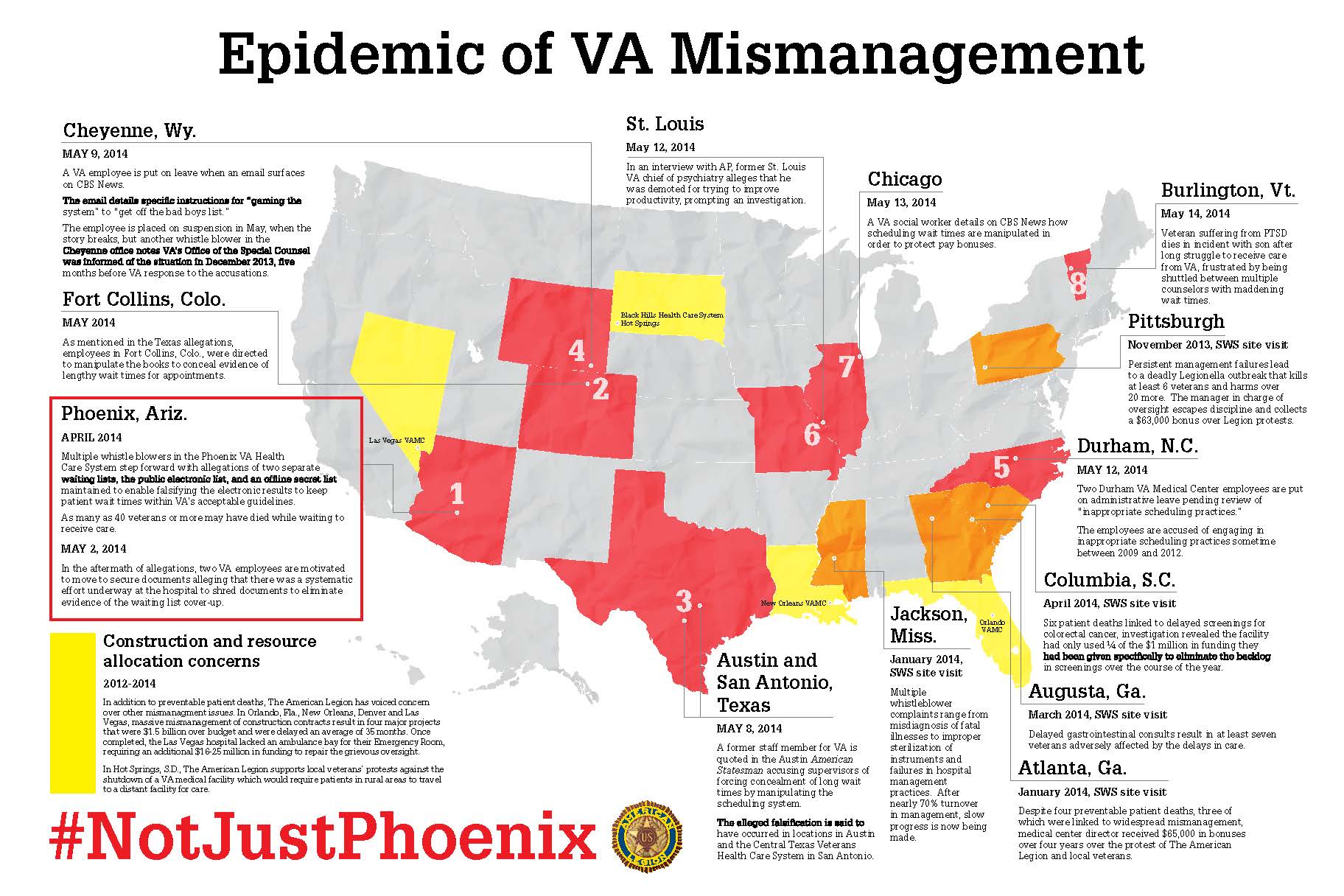 Many senators reminded Shinseki that reports of secret waiting lists were nothing new. “There is a history. The GAO has reported, your own inspector general has reported these kinds of problems in the past. So there is a need now for more than just investigation. There's a need for action to restore trust and confidence, to assure accountability and transparency,” said Sen. Richard Blumenthal, D-Conn.

Sen. Johnny Isakson, R-Ga., pointed to a 2010 IG memo that found VA employees were “gaming the system” in order to keep the backlog of appointments down. Shinseki would only say that he was “not aware other than a number of isolated cases where there is evidence of that.” But Griffin, in his testimony, said allegations of “cooking the books” is “not a new issue,” and dates back 8 or 9 years.  In 2011, 23 veterans committed suicide while waiting for mental health care appointments in Florida and Georgia.

Several members of Congress and a handful of top leaders at the nation’s major veterans organizations have called for Shinseki to resign. On Wednesday, President Barack Obama assigned White House Deputy Chief of Staff Rob Nabors to conduct a review of the VA’s scheduling process.

After the hearing, Shinseki slipped into a seat in the front row and sat for hours as a panel of vet groups and then the Inspector General testified. It was a rare move for a cabinet-level member of the government. And rarer still, after the 5-hour hearing, Shinseki faced a group of waiting reporters and cameras and answered questions.

Asked by Defense One if he felt the pressure to reduce the VA backlog has led to a culture of “cooking the books,” Shinseki said again he wants to wait for the results of the investigation. He was clear that he hasn’t given up on leading the VA as the military enters a new post-war era, and believes that he has done a lot to improve the VA since taking office in 2009.

At the Pentagon on Thursday, Joint Chiefs of Staff Gen. Martin Dempsey backed his former colleague. “He has never walked away from a fight,” he said

NEXT STORY: Why Hasn't the GOP Treated Fort Hood Like Benghazi?