Federal Agencies Tap Data Visualization to Track and Mitigate the Spread of COVID-19
Skip to Content
Get all our news and commentary in your inbox at 6 a.m. ET.
Policy
Summit Showcases Africa’s Progress and Pitfalls

The U.S.-Africa summit showed that as quickly as Africa’s economies are growing, so too is the terrorist threat. How the continent responds will secure its future. By Molly O’Toole

President Barack Obama hosted the first-ever U.S. Africa Leaders Summit in Washington, D.C., this week to highlight the continent’s potential, find ways to help it progress and strengthen partnerships – even as counterterrorism efforts in Africa have forced the U.S. to make uneasy alliances.

At the White House on Wednesday, Obama urged dozens of African heads of state to “say cheese” as they posed for a group photo, including Salva Kiir Mayardit, the president of South Sudan, Africa’s youngest country, and Nigerian President Goodluck Jonathan.

Later, during a closed session on peace and regional stability with Obama and several of the African leaders, including Mayardit, Secretary of State John Kerry sent out a statement condemning the worsening violence in South Sudan. “The people of South Sudan are paying a horrific price for the failure of their leaders to resolve this senseless conflict,” Kerry said. Ethnic violence in South Sudan has taken the lives of hundreds of thousands of civilians, driven 1.5 million people from their homes and left more than 4 million on the edge of famine, according to the State Department. And as the summit kicked off, Amnesty International accused the Nigerian army under Jonathan of committing its own atrocities in fighting terrorist group Boko Haram.

Obama tacitly acknowledged the criticisms that the event laid out the red carpet for strongmen who are to blame for many of Africa’s problems.

“Many times we will work with countries even though they’re not perfect on every issue,” Obama said. “And we find that in some cases engaging a country that generally is a good partner but is not performing optimally when it comes to all of the various categories of human rights, that we can be effective by working with them on certain areas, and criticizing them and trying to elicit improvements in other areas.” 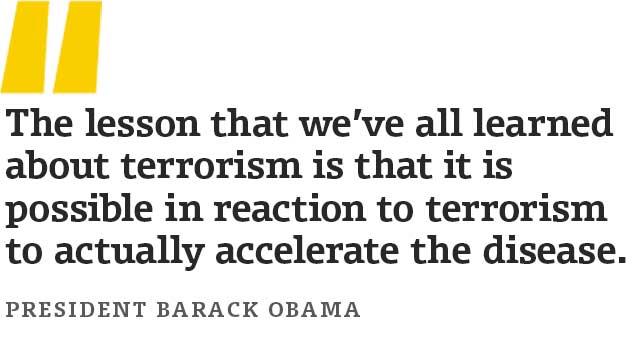 But, he added, “Part of the lesson that we’ve all learned about terrorism is that it is possible in reaction to terrorism to actually accelerate the disease if the response is one that alienates populations or particular ethnic groups or particular religions.”

Obama said that leaders at the summit recognized the most sustainable security solution is to stop terrorism before it begins, with good governance, respecting the rule of law, open institutions, strong civil societies and protecting human rights. As AFRICOM Commander Gen. David Rodriguez recently told Stars & Stripes, “The important part is to know most of the challenges [in Africa] are not purely military challenges.”

The three-day summit focused on a multi-pronged approach to success and stability in Africa, emphasizing economic development and investment, but a growing threat of terrorism on the continent has been a greater focus for the administration and the Pentagon.

Conflicts spreading across the world from Iraq to Ukraine to the South China Sea are demanding immediate U.S. military attention, but the Defense Department has increasingly been shifting its counterterrorism focus to Africa.

“I think there’s uniform concern of terrorist infiltration in many countries throughout Africa,” Obama said at the conclusion of the summit Wednesday night. “The United States doesn’t have a desire to expand and create a big footprint inside of Africa. What we do want to make sure we can do is partner with the African Union, with [Economic Community of West African States], with individual countries, to build up their capacity.”

Leaders at the summit described “an increasingly lethal and geographically expansive set of transnational security threats,” according a White House statement.

U.S. Africa Command began operations in 2007 and now has roughly 2,000 personnel in its headquarters in Stuttgart, Germany, with another 2,000 as part of the Combined Joint Task Force-Horn of Africa at Camp Lemonnier in Djibouti. AFRICOM works with the African Union, African militaries and a slew of security organizations, such as the TSCTP, the Trans-Sahara Counterterrorism Partnership, founded in 2005 to counter al-Qaeda in the Islamic Maghreb (AQIM) and now fighting Ansar al-Sharia, and its counterpart PREACT, the Partnership for Regional East Africa Counterterrorism, founded in 2009.

Today, the U.S. has troops in more than a dozen African countries and trainers and advisors in many more. In March, Adm. William McRaven, the outgoing commander of U.S. Special Operations Command, said American special ops have bulked up from 33,000 in 2001 to nearly 70,000 to counter “irreconcilable” extremists emerging from the Middle East and Africa.

Since 2007, the U.S. has contributed more than half a billion dollars in training and equipment to the African Union mission in Somalia, and the State Department alone has spent more than $170 million to recruit and train forces, the White House said in a statement Wednesday.

The Pentagon has also formed elite African counterterrorism units with U.S. special forces, including the Army’s Green Berets and Delta Force, in Mali, Niger, Mauritania and Libya, as part of a secretive “new Africa plan,” backed by millions in funding. To reverse AQIM’s expansion in Mali last year, the U.S. provided support, training, and supplies to more than 6,000 African soldiers and security personnel. On Wednesday, Obama announced a fresh investment of $110 million annually for 3 to 5 years for the African Peacekeeping Rapid Response Partnership, APRRP, or A-Prep -- formed in part to respond to what happened in Mali.

According to the White House, the State Department’s Anti-Terrorism Assistance program has trained 2,584 participants in 19 African countries. Since 2009, the U.S. has committed $892 million to strengthen Africa’s peacekeeping capacity and institutions and has trained more than a quarter-million African troops and police to serve in United Nations and AU peacekeeping missions. The U.S. is also far and away the world’s largest contributor to UN peacekeeping in Africa, providing nearly $9 billion in “assessed contributions” in the past five years, and more than $1.7 billion in fiscal year 2013 alone. And the White House’s recent inclusion of a $5 billion Counterterrorism Partnerships Fund as part of its Overseas Contingency Operations request -- which met skepticism in Congress -- would provide funding for additional training and equipment to support African partners in the “shared fight against al-Shabaab, AQIM, Boko Haram and others.”

On Wednesday, Obama announced new funding and partnerships, including a new $65 million Security Governance Initiative with six African partners, and credited the summit for mobilizing an additional $37 billion in international aid “for Africa’s progress.”

But some of these U.S. military engagements in Africa offer powerful warnings about its pitfalls.

U.S. and NATO military assistance helped overthrow Libyan leader Muammar Gaddafi in what was initially seen as a “model intervention” and is now viewed as a cautionary tale. Just over a week ago, U.S. military evacuated all State Department personnel from Libya and warned American citizens to leave immediately. Last August, a U.S. military counter-terrorism training program in Libya fell apart after local militias overran a U.S.-trained group and took its U.S.-supplied weapons -- and the program had been intended to jumpstart training that had been suspended after the deadly attacks on the U.S. mission in Benghazi in 2012.

The U.S. also deployed units to Chad at the end of May to assist in the battle against Boko Haram -- though it’s only providing advice and air surveillance to help find the hundreds of Nigerian schoolgirls the terrorist group had kidnapped weeks earlier. Boko Haram and other terrorist groups have continued to take advantage of porous borders and ineffectual -- or even complicit and corrupt -- governments. 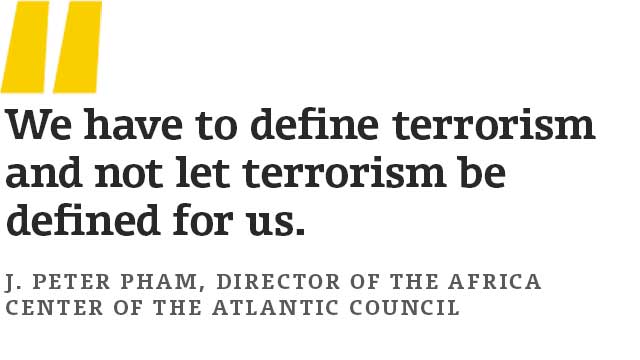 “The key thing is to ask in counterterrorism -- this may sound rather trite, but it’s true -- first, is there a real terrorist threat, of what we would define as terrorism, and second, what does the partner define as terrorism,” said J. Peter Pham, director of the Africa Center of the Atlantic Council. Pham, who formerly served as a member of the senior advisory board of AFRICOM, noted several instances in which the U.S. has trained anti-terrorism units that then have been used to repress people within the country, because some African partners view terrorism as “those who are opposed to the regime” or “people who had ethnic and other issues with the government.”

“In Nigeria,” he said, “Boko Haram is clearly a terrorist threat, but, not everyone who opposes the Goodluck Jonathan regime is an Islamist terrorist with links to al-Qaeda affiliates, either. We have to define terrorism and not let terrorism be defined for us.”

Amanda Dory, the deputy assistant secretary of defense for African affairs, said groups are increasingly affiliating themselves with al-Qaeda and others in the Middle East. And the areas where extremism has flourished in Africa are among the poorest in the world, threatened more by drought and famine. "The inability of the political institutions in many of these countries to enable social and political tensions to be worked out and resolved productively gives a foothold at times for external extremists to inflame existing local grievances in a way that's producing instability," Dory said earlier this week.

"It can take decades in some of these areas where you have such a substantial challenge," she added. "Governance, development and security all have to be addressed simultaneously."

Pham said that much of the U.S. Africa policy has been reactive. “But, in order to be sustainable in the long-term … the only way you can guarantee success is if our partners have skin in the game.”

“Because the message in the summit is that Africa -- yes, there are still problems on the humanitarian level, on the conflict and violence level, on the development level, but it’s an emerging continent with a lot of potential and a lot of resources,” he said. “Africa by and large can increasingly carry its own weight.

NEXT STORY: First Iraq Vet to Serve in the Senate Drops Out of Race