Federal Agencies Tap Data Visualization to Track and Mitigate the Spread of COVID-19
Skip to Content
Get all our news and commentary in your inbox at 6 a.m. ET.
Policy
GOP Budget Hawks Want To Use War Funds To Skirt Defense Caps

McCain, but not everyone, dismissed using OCO funds as a 'dodge' around ending sequestration and getting back to a normal budget process.

By Molly O'Toole and Marcus Weisgerber

House leaders unveiled their plan for bridging the divide between defense and fiscal hawks by using the Obama administration’s off-the-books war chest as a slush fund to circumvent sequestration budget caps.

The House Budget Committee released its non-binding fiscal 2016 budget resolution on Tuesday, proposing Congress spend $523 billion for defense, which adheres to the spending level set for this year in the 2011 Budget Control Act (though allowing increasing spending in the coming years to the tune of $387 billion over the 10-year totals). But the House resolution also sets $94 billion for Overseas Contingency Operations funding, or OCO, a catch-all war chest that is not subject to the budget caps—essentially relying on OCO to make up the shortfall and skirt the issue completely.

President Barack Obama, in his fiscal 2016 budget request, asked Congress for $561 billion in base discretionary funding for defense—intentionally busting the cap by some $38 billion in order to force Congress to deal with sequestration—and $58 billion for OCO. An agreement in late 2013 gave the Pentagon two years of relief from sequestration’s across-the-board cuts, which return this year if Congress doesn’t act.

House Budget Committee Chairman Tom Price, R-Ga., wasn’t shy about the ploy. He highlighted it, saying the Republican budget allocates base and OCO funding that, when combined, sets Pentagon spending “higher than the President’s budget request for the fiscal year.” 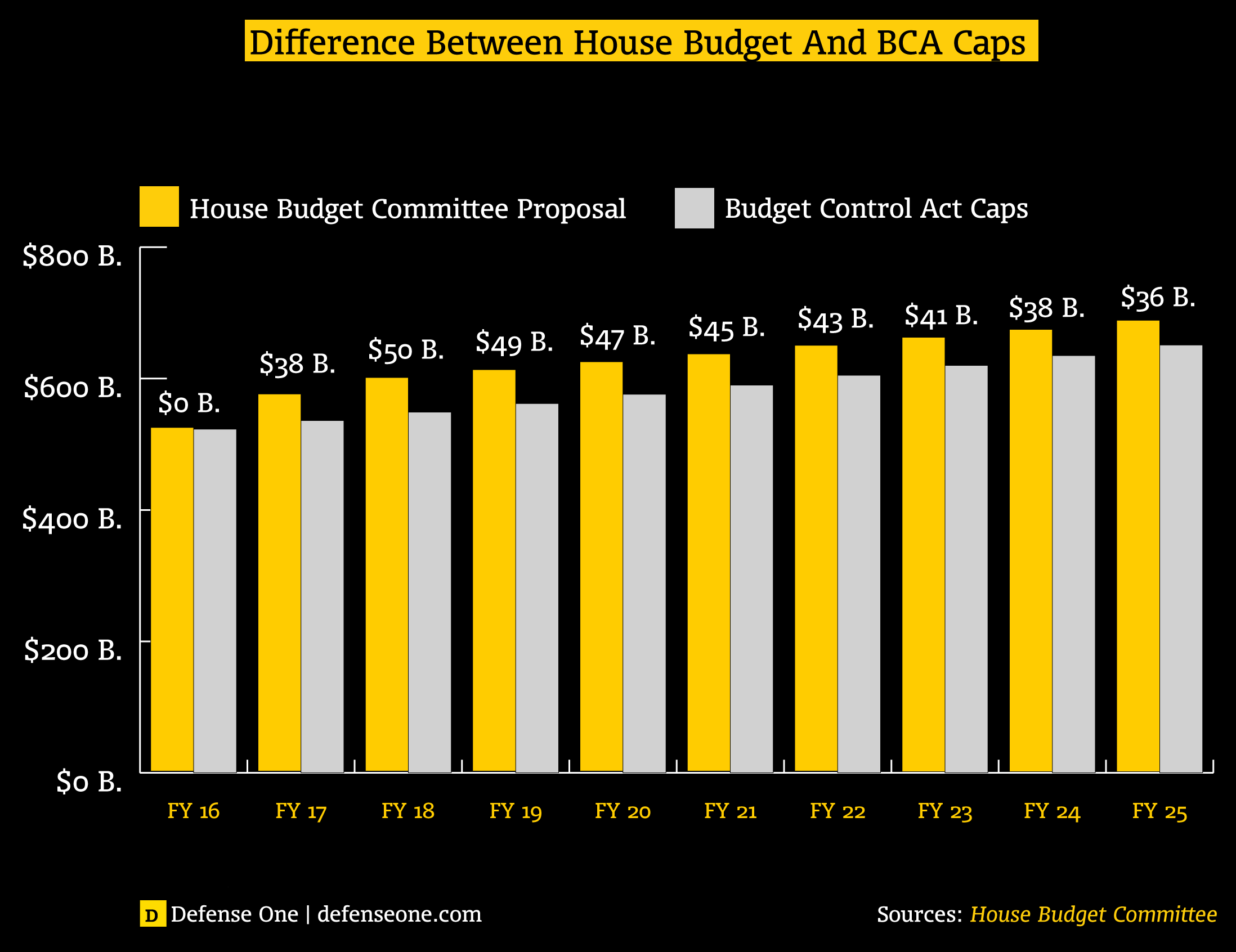 Senate Armed Services Committee Chairman John McCain, R-Ariz., has called for lifting the caps on sequestration but he rejected the House proposal on Tuesday.

“I think that using OCO in that fashion is basically not the best way to address it—OCO is overseas contingency, that’s the name of it,” he told Defense One. “I would much rather go through the normal authorization and appropriations process and I think most members would—this is kind of a dodge.”

Senate Armed Services Committee Ranking Member Jack Reed, D-R.I., also a member of the Senate Budget Committee, similarly disputed the plan, telling Defense One, “I think we’ve got to come to a solution that’s not a quick fix and more of a gimmick than a long term credible source of support.”

Reed and McCain have been working with House Armed Services Committee Chairman Mac Thornberry, R-Texas, who along with Ranking Member Adam Smith, D-Wash., and a group of 70 House Republicans have called for Congress to lift caps on defense spending and grant the Pentagon funding at least at the levels requested by the White House. Thornberry said conversations are ongoing with Price, but he noted, “Defense is now 16 percent of the federal budget and yet it has had to absorb 50 percent of the cuts under the Budget Control Act.”

“We’ve talked about a variety of options and we continue to talk about them, but I think that any of those options have to be credible, not just wish-hope-for sorts of things. So we’ll keep talking,” Thornberry told reporters Monday, adding, “Well, sure, OCO is a potential source.” 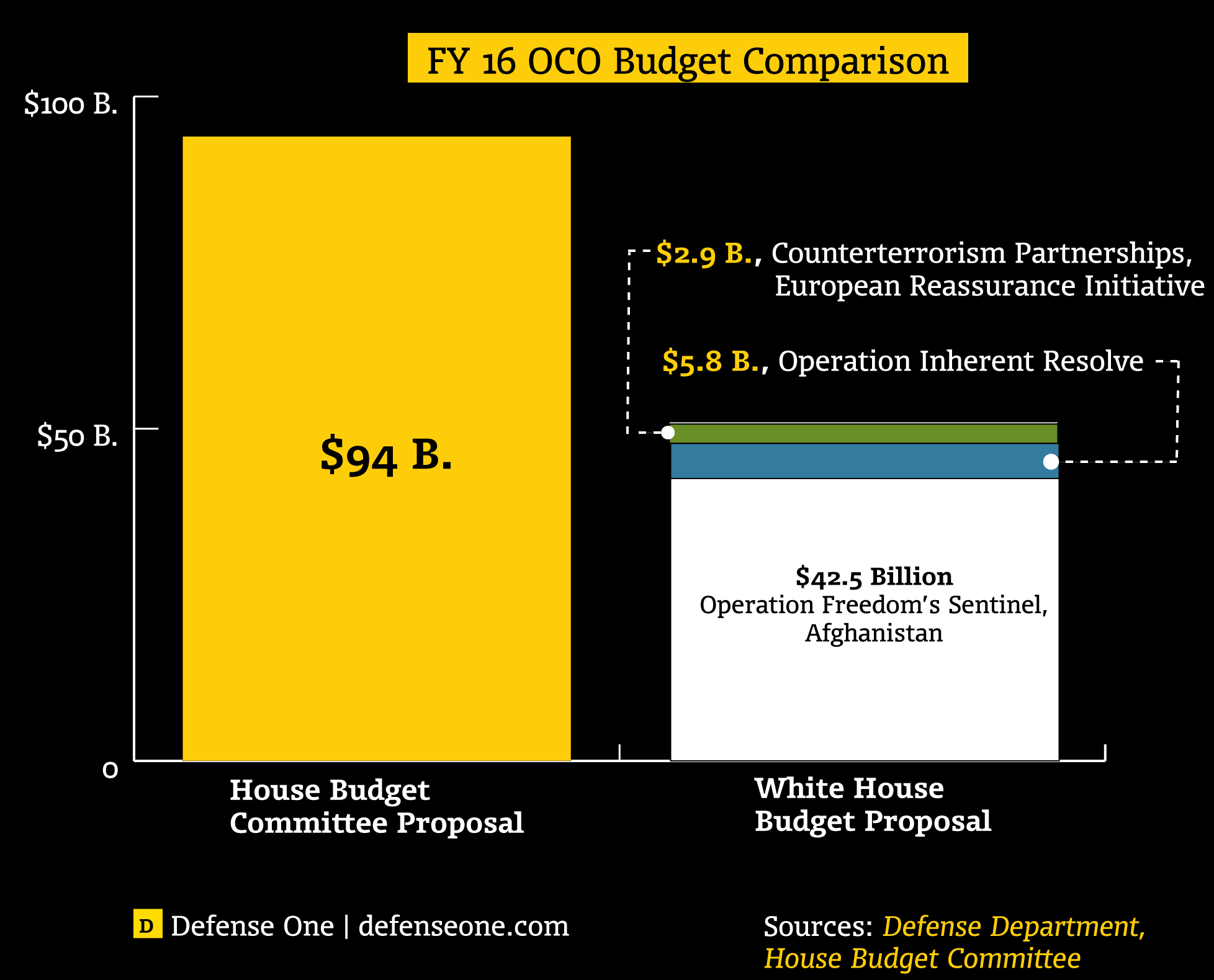 Sen. Tim Kaine, D-Va., also a member of the Senate Budget Committee, said utilizing the OCO was an option being discussed, but floated another deal like Sen. Patty Murray, D-Wash. and Rep. Paul Ryan, R-Wisc., reached in 2013 to grant two-year relief.

Sen. Jeff Sessions, R-Ala., said, “We’ve had arguments back and forth as for whether the war should be in the base budget or the OCO budget—Democrats and Republican have been all around in circles on it.”

“But I don’t dismiss out of hand what they’re doing [in the House]—we’ll be looking at the numbers and we’ll see, and I’m not sure what we in the Senate will do. We might take a different approach.”

“The BCA was passed in 2011, which is a time when the president promised us peace in our time,” Sessions told Defense One. “We withdrew all of the troops from Iraq in 2011, and we had a plan to steadily withdraw our troops from Afghanistan. Now we’ve got our Iraq ally on the ropes and ISIS cutting off heads and it’s not just a terrorist organization, it calls itself a state … so I think there’s logic to saying that the OCO would need more money.”

“I appreciate the attempt to find some way to help us, but I think that we need a better solution than that one,” McCord said Tuesday at a defense industry conference sponsored by McAleese and Associates and Credit Suisse. “The budget resolution…will not answer the question of what’s going to happen ultimately at the end of the year.”

Senate Republican leadership said the Budget Committee will begin markup this week with the full Senate turning to the budget next week.

But it’s a long road ahead, as McCord noted, saying, “I think that we’re going to have to go through a period of skirmishing for a couple of months of things that probably won’t work before we then pick ourselves up and move to real consensus.”

Kedar Pavgi created the graphics for this article.