Shifting Left: How DevSecOps Strengthens Agency Security and Risk Management
Skip to Content
Get all our news and commentary in your inbox at 6 a.m. ET.
Science & Tech
The Military Wants to Understand Why You Believe What You Believe

What makes an idea like the Islamic State spread? The Pentagon wants to know. By Patrick Tucker

At what point does an idea like the Islamic State go viral? What conditions on the ground must be present for the creation of an Islamic caliphate across the Middle East to spread?

This is the type of question the Defense Department wants to solve through the Minerva Initiative, launched in 2008 under the Office of Naval Research. The group recently released its annual broad agency announcement, offering to fund social science research to the Defense Department. They plan to award $8 million dollars to five to seven teams for projects ranging between 3-5 years in length.

Here’s how they frame one of the key areas they’re looking to explore:

“Research on belief formation and the spread of ideas may help analysts, policy makers and trainers better understand the impact of operations on seemingly disparate populations. It may also inform the development of countermeasures to reduce the likelihood of militant behaviors.”

The Minerva Initiative is careful to point out that that their work extends beyond understanding the motivations of any particular group. But program managers feel that the rise of IS, and the intelligence community’s inability to anticipate it, imbues their work with a timely importance. “Recent security issues such as the emergence of terror groups like ISIS and unanticipated conflict in Eastern Europe highlight the type of critical knowledge gaps that Minerva research aims to address,” Minerva program director Erin Fitzgerald told Defense One. 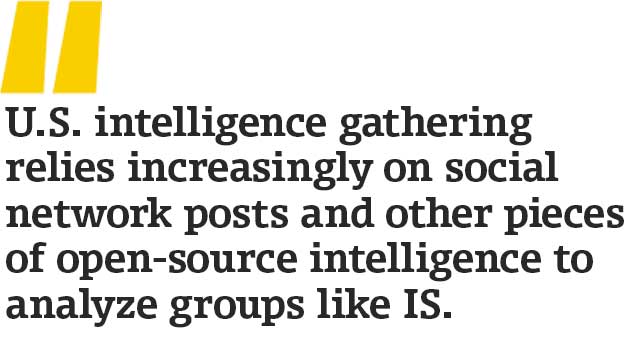 The Initiative’s research is unclassified but that hasn’t protected its efforts from public suspicion. Earlier this year, a group of Cornell University researchers received Minerva Initiative funds to analyze the “sentiment” in social networks to find “tipping points.” That research proved to be a public relations problem when it turned out that the university was connected to a Facebook experiment that analyzed the posts of 600,000 users. That experiment also manipulated the way posts showed up in the newsfeed to study “emotional contagion.”

U.S. intelligence gathering relies increasingly on social network posts and other pieces of open-source intelligence to analyze groups like IS.

But there’s a big difference between simple intelligence gathering about location, group activity, agenda, etc. and figuring out something as personal and vaporous as belief. The former is much easier than the later and that leads some anthropologists such as St. Martin’s University professor David Price to conclude that the Defense Department is relying too much on models purporting to explain how people on social media, or the Internet, interact.

“Minerva keeps funding programs that make sense to the military (and thus, they get what they want), but don’t make a lot of sense to independent social scientists,” he said. “With the rise of net-centric warfare, I have concerns that civilian leadership and military decision makers are putting too much faith in the claimed predictability and promises of social network analysis…I can completely understand why the military is attracted to these models, but understanding social networks, to understand the spread of ideas and beliefs in places like Iraq approaches absurdity.”

According to Minerva program managers, sentiment analysis and network modeling represent a small portion of the sorts of research they fund and the overall goal of the project. “In contrast to data-mining system development or intelligence analysis, Minerva-funded basic research uses rigorous methodology to investigate the ‘why’ and ‘how’ of phenomena such as influence, conflict escalation and societal resilience,” Fitzgerald said.

When Defense One asked Minerva Initiative program managers for model research illustrating what they were looking for, they cited Dr. Scott Atran, whose work has shown the relationship between a given group’s notion of what is sacred influences their belief in the “legitimacy of violent solutions.” They also cited a University of Maryland study by Patrick Roos, Michele Gelfand, Dana Nau and Ryan Carr that looked at how social mobility within a group, which refers to how easily group members can move up to a higher socio-economic strata, affects acceptance of strict policing.

The question of how and why ideas form and spread probes a lot deeper than a simple sentiment analysis of Facebook posts and tweets. Beliefs—however they present themselves—are informed by perceptions of upward social mobility, income disparity, community-based parental and family norms, justice and thousands other factors that were once impossible to model in any coherent way. That’s changing as more people around the world produce more digital information about how people interact with one another. It’s an excellent time for data-driven social science research. But is the military the best outfit to fund it at its most innovative? 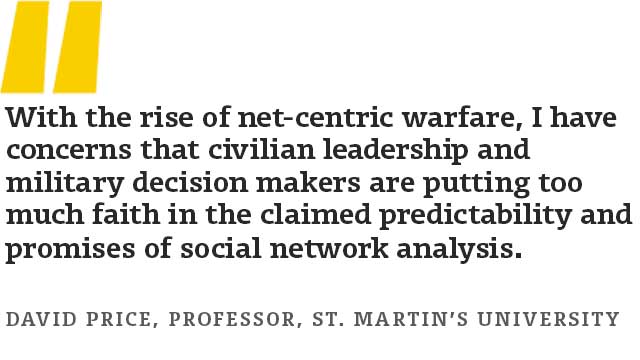 The initiative’s detractors argue, simply, no. The Guardian’s Nafeez Ahmed recently called Minerva “a prime example of the deeply narrow-minded and self-defeating nature of military ideology."

Price agrees and says military-funded sociological research efforts are doomed by their very nature. You can’t write about IS without discussing how U.S. policies in the Middle East contributed to its rise. In Price’s opinion, the Defense Department isn’t interested that sort of reflection. The more useful the insight researchers might hit upon, the more likely the brass would be to ignore it.

“I just don’t see Minerva funding a study of how American civilian, military, and intelligence activities in the Middle East contributed to the rise of the Islamic State,” he said. “Anthropologists could play important roles in national security research, but with programs like Minerva—and specifically, with this BAA--they seem to always be asking questions…that will produce the answers they want to hear.”

Perhaps, but the fact that the military has begun to pursue these questions at all—even if the approach remains naïve—represents earnest attempt to close a big gap.

Last week, CIA Director John Brennan discussed the agency’s limitations in anticipating the rise of groups like the Islamic State. Speaking at the Intelligence and National Security Summit in Washington, D.C., Brennan said, “What all [the] indicators don’t give you is intent…That is the most difficult thing to do.”

For all our technological ability to see the earth and nearly everyone from every direction at once, we’re still far away from a real understanding of human motivation from a national security perspective.

That gap in intent intelligence speaks to real a Defense Department need, according to Fitzgerald. It’s why understanding the sociological roots movements like IS are very much military business.

“As insurgencies and ethnic, religious, and class-based movements reshape the political and economic landscape in many regions vital to U.S. national security, it has become clear that decreasing terrorism and political violence requires an understanding of the underlying forces that shape motivations and (importantly) mobilize action.”

Indeed it does. And always has. Yet that understanding doesn’t always arrive on time.

NEXT STORY: The Rise of the Islamic State Could Mean More Drones