The Wisconsin truck-maker has won the coveted megacontract to replace most of the Army’s iconic Humvees.

Oshkosh won the Pentagon’s $30 billion sweepstakes to replace the U.S. Army’s Humvee with up to 55,000 new Joint Light Tactical Vehicles, or JLTVs, over the next 25 years, service officials said.

The Army awarded a $6.7 billion contract Tuesday to Oshkosh for an initial batch of 17,000 vehicles for the Army and Marine Corps. Production will begin in the first quarter of fiscal 2016, according to an Army release, with a later decision on the full scale of production to come in 2018, the year the vehicles are expected to be ready for battle.

“The…contract award moves an important capability closer to our soldiers and Marines and represents an important success for the acquisition community,” said Scott Davis, the Army program executive officer for combat support and combat service support, at the Pentagon shortly after the announcement.

The Wisconsin-based defense firm’s victory follows 14 months of trials of prototypes from Oshkosh and losing bidders AM General and Lockheed Martin. Years of difficult combat in Afghanistan and Iraq, full of harsh terrain and roadside bombs, compelled the Army to seek an armored vehicle to replace the Humvee. They sought a truck that was tougher and better-armored in critical spots, but also agile and capable of off-road maneuvering.

The JLTV is meant to recover the vehicle performance lost when the Army and Marine Corps had to up-armor Humvees to protect troops from an abundance of improvised explosive devices, or IEDs, in Iraq and Afghanistan, said Col. John Cavedo, the former project manager, during Tuesday’s Pentagon briefing.

The armor’s extra weight prevented the Army from using them in battle as planned, Cavedo said. “This is going to allow us to operate the way we had envisioned our light tactical vehicles being able to operate with greater flexibility and … gaining back an expeditionary capability that we lost” when ground forces bought large and heavy MRAPs.

The JLTV fills a hole in the Army and Marine Corps vehicle fleets. “The gap in today’s capabilities means that commanders often have to choose between payload, performance and protection,” Davis said. The truck is the first built for networked military operations. And a CH-47 Chinook or CH-53 heavy-lift helicopter will be able to carry the JLTV, unlike the heavier MRAP.

Army officials would not say why they chose Oshkosh over its competition because the losing bidder can contest the contract in the coming weeks. They did say that average price of each vehicle, fully loaded with battle equipment, would cost less than $399,000.

John Bryant, senior vice president for defense programs for Oshkosh Defense, sat down with Defense One reporters last fall to describe his company’s efforts to win the contract. “The Humvee was a magnificent vehicle in its day,” he said, “But when armor was added to the Humvee it became too heavy for the suspension system, too heavy for the drive train and lost all of its mobility. With all that armor there was no room to add the underbody protection, which was critical. So the Humvee wound up being very heavy, very well protected from the sides with almost none of the protection underneath and almost none of the off-road mobility that was the reason the U.S. purchased the Humvee in the first place,” he said.

The design that Oshkosh submitted was a smaller version of its M-ATV vehicle, but about one third smaller. Bryant was eager to highlight the fact that there were already 9,000 M-ATVs in service and many were already doing the work of the JLTV. “Our M-ATV is the only platform in theater, right now, performing the JLTV mission,” he said. “If you took our JLTV and put it side by side our M-ATV, across rough terrain, our JLTV will go 70 percent faster than the best vehicle out there, which happens to be ours.”

The only perfect strategy for not experiencing casualties when Humvees encounter IEDs is to not have humans in the Humvees. Oshkosh markets an autonomous vehicle kit called the TerraMax that relies on light detection and ranging as well as radar for autonomous robot steering (that doesn’t need satellite communications.)

The Oshkosh M-ATV has a unique suspension, called TAK-4i, giving higher ground clearance and a smoother ride on rugged terrain. Company officials have touted the suspension throughout the competition. Even though their vehicle has been on display at many trade shows, the underbelly of the truck had been blocked out by black tarp so competitors could not steal their what they consider the vehicle’s secret sauce.

Oshkosh could easily convert their JLTV design into a self-driving variant, said Bryant. “The Oshkosh TerraMax is designed to be integrated onto any tactical wheeled vehicle that the customer desires. We’ve integrated it and demonstrated it on our medium tactical vehicle replacement,” he said. “We can operate our TerraMax fully autonomously where you program it and it just goes; we can have it where one operator can loosely control multiple vehicles; we can do follow the leader.”

A team from Stanford first demonstrated autonomous driving more than ten years ago at the Defense Advanced Research Projects Agency [second] Grand Challenge event. Slowly but surely, self-driving trucks are becoming part of the Army’s future plans. Speaking at a National Defense Industry Association event in Virginia on Tuesday, Army Maj. Gen. Cedric Wins described robot steering for tactical vehicles as having “advantages that would provide additional protection to forces, or relief, or allow other soldiers to do other things. That’s a key technology as part of the [Force 2025 and Beyond] effort.”

Of course, if you want your truck to also take out enemies, or bring troops to the front lines capable of doing so, that’s a different challenge, and not one that the Army has any interest in at the moment, said Bryant. “It’s one thing to get the customer to accept a vehicle with no people in it driving around. That was a step the customer had to take. It’s another huge step to have the customer accept a huge vehicle, with no people in it, driving around shooting,” he added. “But it’s not really that hard to do. It’s harder to make the vehicle operate than make the weapons system operate on the vehicle.” 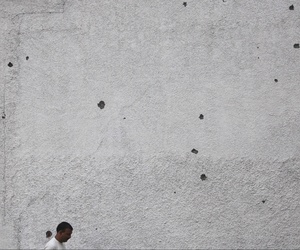 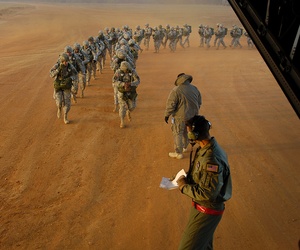 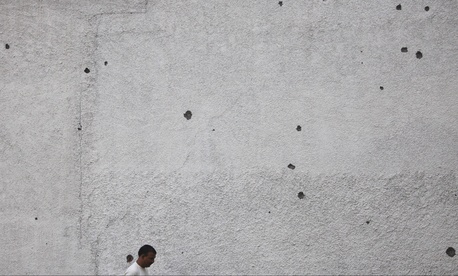 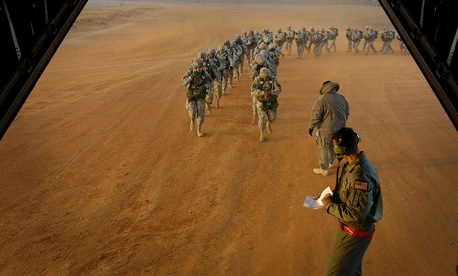