Here’s How Multi-cloud Is Driving the Future of Government Work
Skip to Content
Get all our news and commentary in your inbox at 6 a.m. ET.
Science & Tech
Here's a Look at New Exosuits for the Civilian World

After years of tinkering and military adventures, the first exoskeleton suits are finally walking out of the lab and into the market.

Hollywood set a high bar for exoskeleton suits. Technology imagined in Iron Man, Aliens, and Edge of Tomorrow all endow humans with superhuman abilities. After years of tinkering and military adventures, the first exoskeleton suits are finally walking out of the lab and into the market. Rather than battle extraterrestrials, however, they’re poised to change life for millions of construction workers, warehouse employees, and paraplegics (the battlefield may come later ).

If there is a mantra in the industry right now, “it’s endurance first, then power,” says Russ Angold, the the president and co-founder of Ekso Bionics , which designs wearable mobile suits that use motors, braces, or levers to increase the users’ strength and endurance. “Powered is the future, but non-powered is the way to start.”

Although the industry began in earnest in the 1980s with US military-funded prototypes, most powered suits were too clunky, impossibly expensive, and years ahead of any viable market. By 2012, however, the technology had caught up with engineers’ imaginations (and budgets). Mobile computing, processing speeds, batteries, sensors made powered suits smaller and cheaper, but applications for a $200,000 walking skeleton were still limited, primarily for medical rehabilitation.

Yet entrepreneurs realized the real market opportunity was not building Sigourney Weaver’s powered suit in Aliens, but simpler devices that help everyday workers with mundane, repetitive tasks such as lifting screwdrivers or moving pallets. Instead of batteries and motors, these devices strap on to workers bodies and transfer much of the weight to an exoskeleton through a system of wires and counterweights, similar to image-stabilizing arms for steadicams. Objects feel almost weightless allowing workers to manipulate heavy objects using a fraction of the typical energy.

Today, many of the 36 or so exoskeleton companies such as Ekso Bionics and SuitX are beginning to offer lightweight passive designs using metal and carbon-fiber frames that attach to the body or exterior scaffolding for construction and logistics workers.

The point of these exoskeletons is to augment humans where they are weak. “It’s not about making workers superman,” says Homayoon Kazerooni , a University of California robotics professor who has worked with a number of exoskeleton companies. “We want to eliminate the pain of the physical labor of these guys.”

SuitX is releasing its own modular system, a passive exoskeleton for the legs, backs and shoulders, each of which is listed for sale for under $5,000, as well as a more expensive full-body version for workers in industrial settings who need support for a wider range of movements. Its Phoenix X, an experimental powered version, allows paraplegics to walk unassisted for four hours up to 1.1 miles per hour.

The market is finally growing as well after years relying on military and medical insurance companies. “The big trend now is moving into the commercial space,” says Dan Kara of ABI Research. ABI expects to see that the market for exoskeletons exceed a billion dollars within the decade, up from about $100 million last year. Although just a sliver of the market today, ABI expects the construction, manufacturing, demolition and logistics industries to represent almost half the industry revenue within eight years. 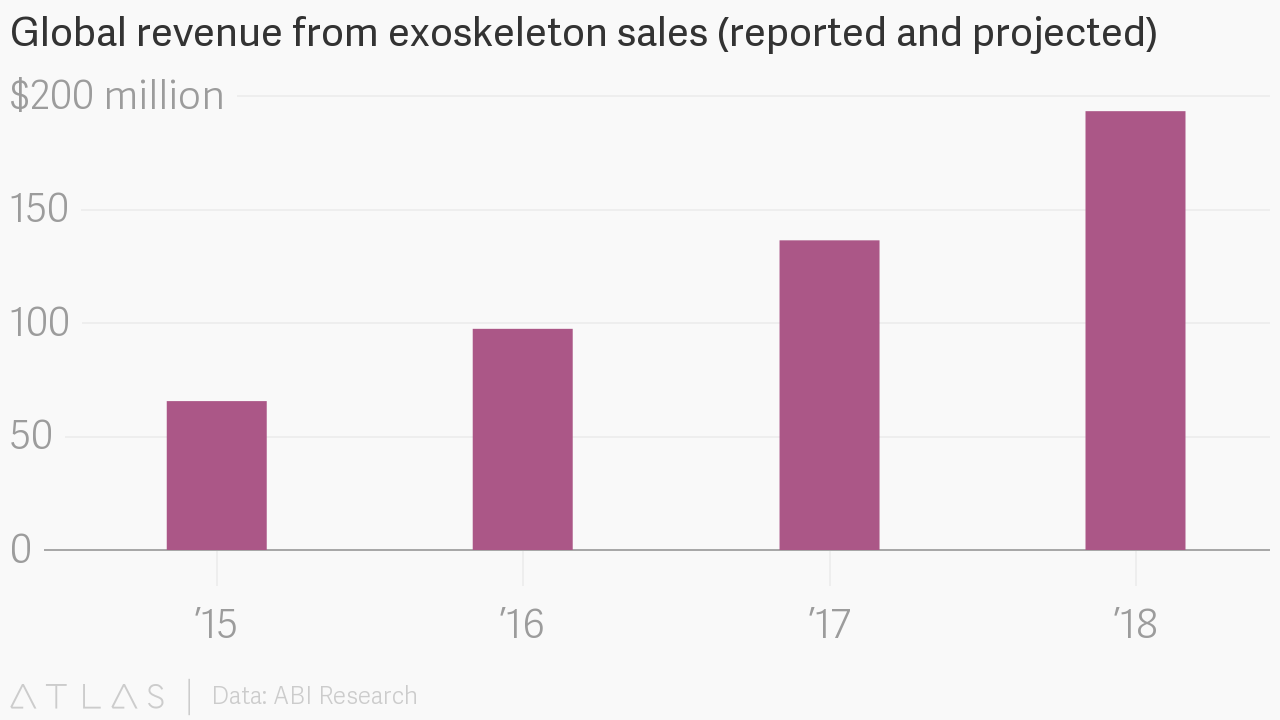 NEXT STORY: Marines: 'The First One Through the Door Should Be a Lethal Robot'