Innovation, Partnership Take the Army’s Long-Range Missiles to the Next Level with PrSM
Skip to Content
Get all our news and commentary in your inbox at 6 a.m. ET.
Science & Tech
Russian Arms Production Slowed by Coronavirus, Analysts Find

Many Russian arms factories are slowing their production amid the COVID-19 pandemic, according to a report from geospatial analytics company Orbital Insight, obtained exclusively by Defense One. The revelations further undermine Moscow’s attempts to project an image of a government in control of the coronavirus outbreak in its country.

Among the affected firms:

Not every Russian firm has been visibly affected. The Orbital Insight report saw no evidence of a productivity dropoff at the Kazan Aircraft Plant, which makes parts for strategic bomber aircraft. 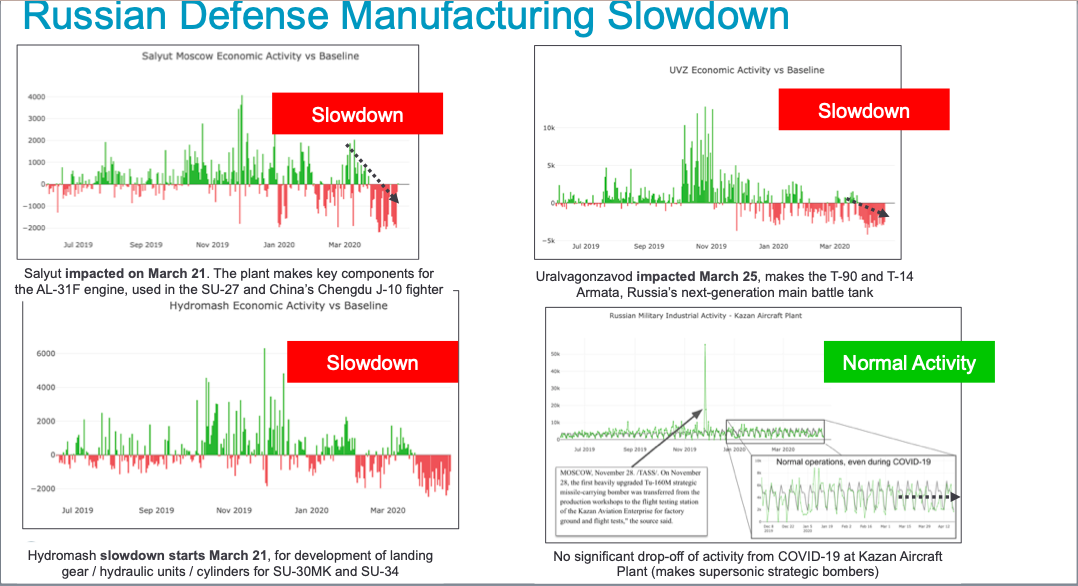 The analysts applied machine learning and data science to anonymous phone data obtained from a variety of partners. Such data can allow researchers to track large-scale human movement trends in close to real-time, which can “inform policymakers as to the effect of a particular restriction — or the impact/consequence of a breach of the same,” said Robert Cardillo, an Orbital Insight advisor who once ran the National Geospatial-Intelligence Agency.

Researchers use the data to establish a baseline of activity, then to look for aberrations and disruptions, Cardillo told Defense One in an email.

“In the intelligence profession, job one is to understand normal so one can have any chance of detecting abnormal. [Orbital Insight] senses global activity — or lack thereof — in a way that enables an understanding of the baseline pattern of life. That foundational understanding enables not just the fact of a change in that pattern but to — more importantly — infer meaning,” he wrote.

The report offers detail about slowdowns beyond what Russian media has already revealed, said Michael Kofman, a senior research scientist at CNA, a nonprofit research and analysis organization in Arlington, Virginia. Kofman said he was surprised at the company’s ability to obtain Russian cell phone data, which is required by law to be stored on servers in Russia.

“The fact that this company is able to aggregate anonymous cell use data is a real boon for those interested in the level of productivity and output in Russia's military-industrial complex,” he said.

Overall, Kofman said, he expects “a significant drop off in production for at least two months in the Russia defense industry as a result of COVID-19 measures, but it will be highly uneven depending on the region and assembly plant/shipyard.”

The Russian government has tried to project an image of a country little affected by the coronavirus. In March and the beginning of April, the government flew protective equipment and medical supplies to Italy and to the United States in what many call a propaganda ploy. But government officials now acknowledge that they are experiencing a shortage of protective equipment, The country has confirmed that it has more than 100,000 confirmed cases.

Babel Street, a data analytics company that specializes in natural language and sentiment data, says the government’s initial steps were popular with Russians. But analysis of Russian-language social media posts on platforms like VK and local blogs suggest that Russian President Vladimir Putin’s image has been slipping.

“There was a ton of positive sentiment early on. People were buying the government line that Russia was here to help the world. I think that things really began to sour when they saw friends and neighbors coming down with this disease,” said McDaniel Wicker, Babel Street’s vice president of business development.

Russians are growing increasingly anxious with lockdown conditions, Wicker said. An April 20 street protest in Vladikavkaz could be a sign of civil unrest to come. “We are able to get a lot of insights from some of our data sources showing social unrest popping up in some of those areas…before it began to pop up in the English language press,” he said.

“There’s a narrative in Western media that Putin is all-powerful,” he said. “This shows that to be a misconception. The state does not have infinite means, information, or even control over its population. Given the right circumstances, there could be significant change in Russia.”

NEXT STORY: US Intel Community Says Coronavirus Was Not Made In a Lab