Inside the Disaster Zone
Skip to Content
Get all our news and commentary in your inbox at 6 a.m. ET.
Science & Tech
US Military Starts Vaccinating Troops, Behind Russia and China

The Pentagon expects to distribute 44,000 doses of covid-19 vaccine among military personnel and retirees against COVID as early as next week at 16 sites in what officials called a “controlled pilot.”

The doses will cover only a small fraction of what's needed to vaccinate everyone in DoD care, including the one million active duty personnel and more than nine million benefits-receiving veterans. 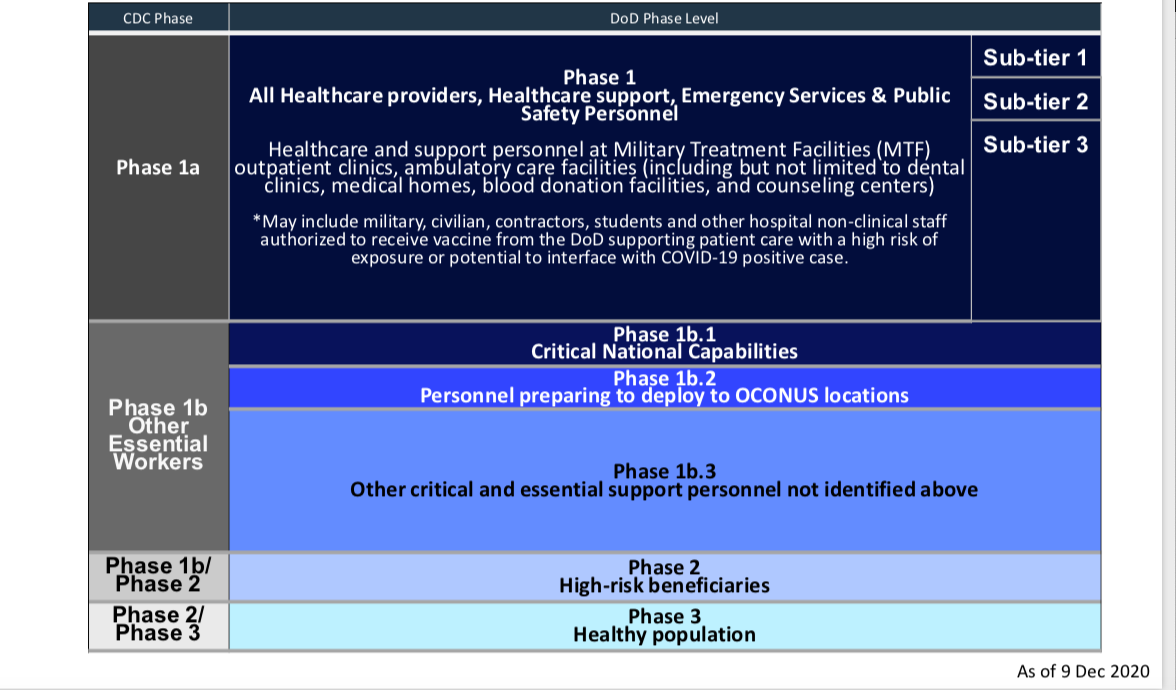 A slide distributed by the Defense Department on Wednesday showing the initial phases for vaccine distribution among the DoD.

Meanwhile, Russia and China have begun to vaccinate their entire active duty force with their own versions of a vaccine — ones that did not go through rigorous FDA evaluations.

Officials could not say when they expect to have vaccinated the entire force. A chart distributed to media shows that critical national capabilities and personnel expected to deploy outside of the United States are also part of “Phase 1” but not the initial 44,000 doses.

“It’s going to be contingent on how much vaccine, what different types of vaccine we get over a period of time that we would be able to tell you, based upon our schema, we expect to be able to do X hundreds of thousands by the end of January versus February. So it's hard to give you a timeline now with so many questions to be determined in terms of which vaccine and how much we get and when we get it,” said Thomas McCaffery, the Assistant Secretary of Defense for Health Affairs.

“For us, the important thing is we’ve developed a planned program for dissemination. As we validate it in these initial 16 sites, we are confident we will be able to use our plan to very quickly [disseminate vaccine]” said McCaffery. Some 13 of the initial 16 sites will be located in the United States, per the illustration below. 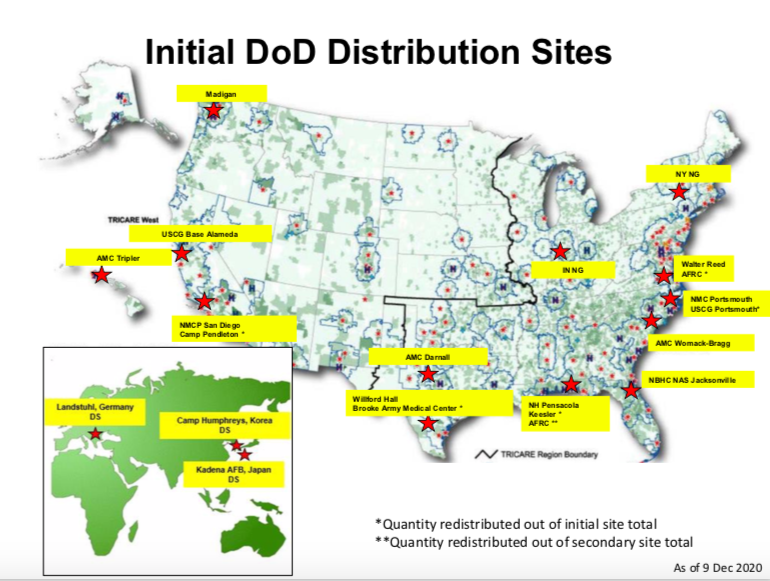 A slide distributed by the Defense Department on Wednesday showing the initial locations for vaccine distribution.

One researcher said that full vaccination might not occur until next spring, based on expected availability to the general U.S. population. “March, April is where the general population,” will be able to access the vaccine Tinglong Dai, an associate professor of operations management and business analytics at Johns Hopkins told Defense One. “That’s probably the point where we start distributing the vaccine to wider society including the military.”

In contrast, Russian media reported this month that the country has already vaccinated some 400,000 military personnel. China approved the use of an experimental vaccine for use in the military in June.

Neither of these vaccines went through an evaluation process as rigorous as the FDA’s so there are some questions about the efficacy and safety of each.

Chief Pentagon spokesman Jonathan Hoffman downplayed how the small vaccination numbers among the U.S. military would affect readiness. “We’ve been relatively fortunate. A large number of our forces are in age criteria, health status, where we’ve fared better than others,” he said. “We’re confident, a month, two months, three months, four months, we’re going to be able to move forward with all the DoD missions we’ve been entrusted with, the way we have over the last year in the face of Covid.”

NEXT STORY: The Future Of Flight Training Is A Gamer Headset That Watches You Play