Taking Flight: How Akima Is Helping to Shape the Airmen of the Future at the United States Air Force Academy
Skip to Content
Get all our news and commentary in your inbox at 6 a.m. ET.
Threats
Obama Orders Air Campaign Against ISIS in Libya, Escalating ‘No-Boots War’

There’s no projected end to the strikes, which U.S. officials say have been requested by the new Libyan government.

The U.S. military has launched an air campaign against the Islamic State in Libya, bombing positions in its coastal stronghold of Sirte and opening up a third major front against the group.

There’s “no end point at this point in time” to the “precision airstrikes,” which began on Monday “at the request of the Libyan Government of National Accord,” or the GNA, Pentagon Press Secretary Peter Cook told reporters.

“After careful consideration, we’re prepared to carry out more strikes in careful preparation with the GNA,” Cook said. “I don’t want to predict the pace.”

Cook said the strikes were carried out by authority of the 2001 Authorization for the Use of Military Force against al-Qaeda, the same authorization used for the conflicts in Iraq, Afghanistan, Somalia, Yemen and Syria.

He said no American troops were on the ground aiding in these targeted strikes, but said they have been “in and out” of Libya, declining further detail.

The U.S. military has been dropping bombs on suspected ISIS fighters in Libya for months, including one series of strikes in February that killed nearly three dozen, and another strike in November that the Pentagon believed killed the head of the affiliate, Abu Nabil.

The difference between those strikes and what occurred Monday? The Libyan government asked for Monday’s strike in Sirte. “They have not up until now requested this kind of assistance,” said Cook.

ISIS’ Libyan affiliate is believed to have “under 1,000—possibly several hundred” fighters in Sirte, Cook said. But the group could have anywhere from 2,000 to 7,000 fighters across the country, drawn from Libya, Tunisia, Algeria, Egypt, Mali, Morocco and Mauritania, according to a UN Security Council report Secretary General Ban Ki-moon referenced in mid-July.

U.S. intelligence estimates put the total between 4,000 and 6,000 as of April, about double last year’s estimate, according to the commander U.S. military forces in Africa, Gen. David Rodriguez.

Cook said Monday’s strikes hit a tank and two ISIS vehicles. He gave few additional details and offered no estimates on the number of fighters that may have been killed.

He said the GNA government had requested the strikes “in recent days.”

“These strikes were authorized by the president following a recommendation from [Defense Secretary Ash Carter] and Chairman [of the Joint Chiefs of Staff, Gen. Joseph] Dunford,” Cook said. “They are consistent with our approach to combating ISIL by working with capable and motivated local partners.”

Read more: What A War With ISIS in Libya Would Look Like
See also: Here’s How US Special Operations Command Views Libya
And: What the West Can Do about The Biggest Obstacle to Libyan Stability

News of the strikes follows weeks of stalled fighting after advancing government-backed forces were stopped by snipers, suicide bombers and roadside bombs in an offensive begun more than two months ago. It also comes just two weeks after the UN said the group is facing the “distinct possibility” of defeat in Sirte, and could scatter across North Africa as a result.

“GNA-aligned forces have had success in recapturing territory from ISIL thus far around Sirte, and additional U.S. strikes will continue to target ISIL in Sirte in order to enable the GNA to make a decisive, strategic advance,” Cook added in an open-ended preview of what’s to come. 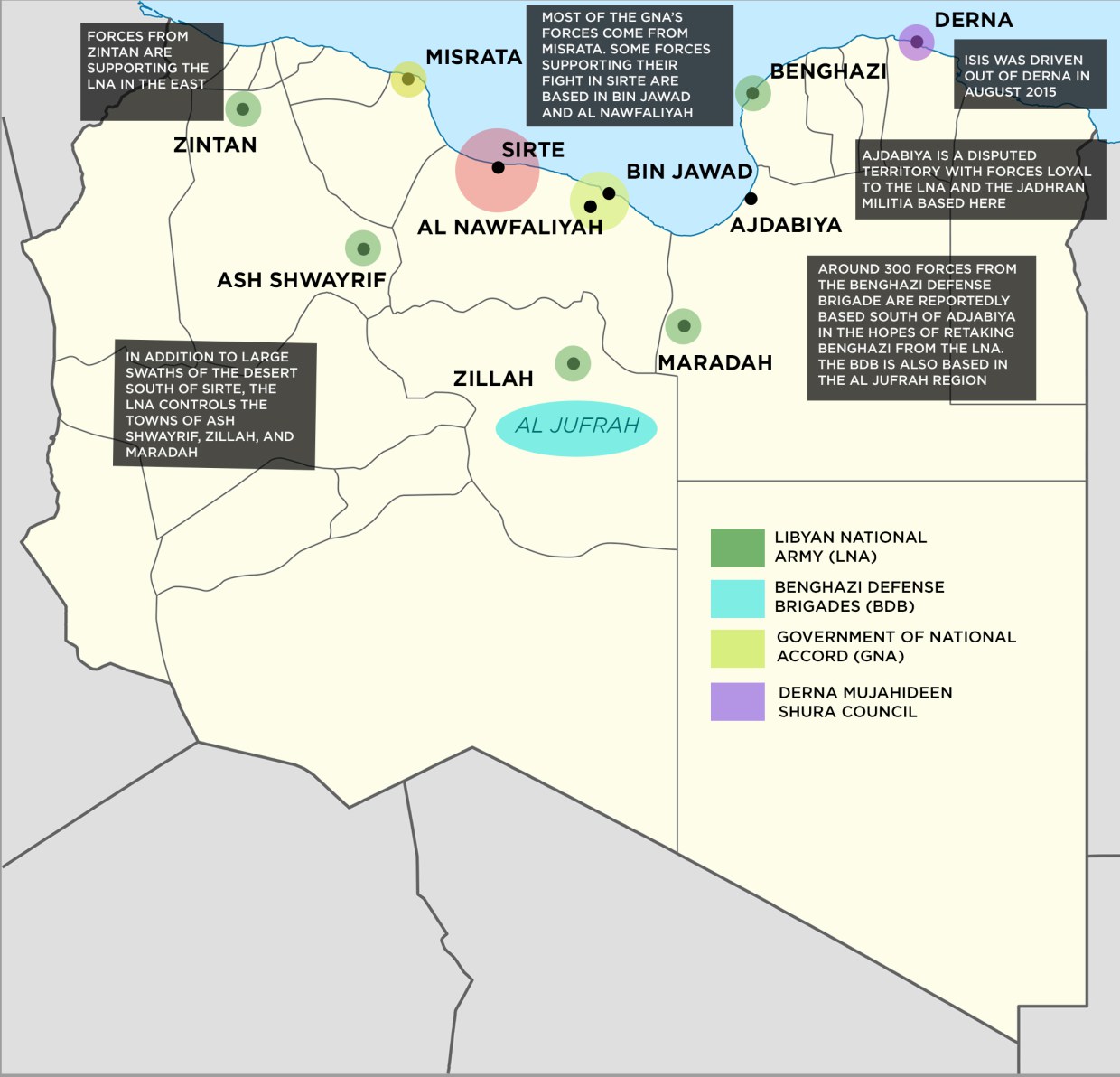 Key points in Libya’s fight against ISIS, via the Atlantic Council, July 11, 2016. Also see this ISIS regional control map, including Libya, from the Institute for the Study of War back in May.

Indeed, at least some ISIS fighters in Sirte have seen this coming. The Telegraph reported in June that many militants had begun shaving off their beards to blend in with civilians ahead of the government-backed offensive.

Reported sightings of British special forces have emerged from Libya in recent weeks. That follows France’s mid-June confirmation of the involvement of its special operators in the country, and December’s operational security headache for U.S. special forces, photographs of whom made their way to the Libyan Air Force’s Facebook page, and thence promptly to multiple social media platforms.

NEXT STORY: Russian helo shot down; Kerry’s dilemma in US-Russia talks; Moving on Manbij; Pentagon asks for bids on controversial nuke programs; and a bit more.