Inside the Disaster Zone
Skip to Content
What you need to know about the defense industry - in your inbox.
Business
The Military's Cybersecurity Budget in 4 Charts

The White House is pitching $5.5 billion in cyber spending for FY 16. Here's what that money looks like.

This story was updated March 19.

U.S. Cyber Command spending will take a 7 percent hit this year, even as it tries to get mission troops up and rolling in 2016, according to Defense Department budget figures.

Last year, the force was funded at $546 million, while 2015 estimates project a $509 million purse. Pentagon spokeswoman Lt. Col. Valerie Henderson on Wednesday night said the 2014 number included money for one-time purchases "to fit-out and lease facilities" for the cyber troops.

Money for the command -- tasked with orchestrating network defense maneuvers and offensive cyberattacks -- will stabilize over the next five years, totaling out at $2 billion.

About $500 million in 2016 would go toward compensating computer security whizzes departmentwide, according to budget materials provided to Nextgov. Earlier this month, Defense received the green light to fast-track the hiring of 3,000 civilian cyber pros, in part, to staff the half-full Cyber Command. 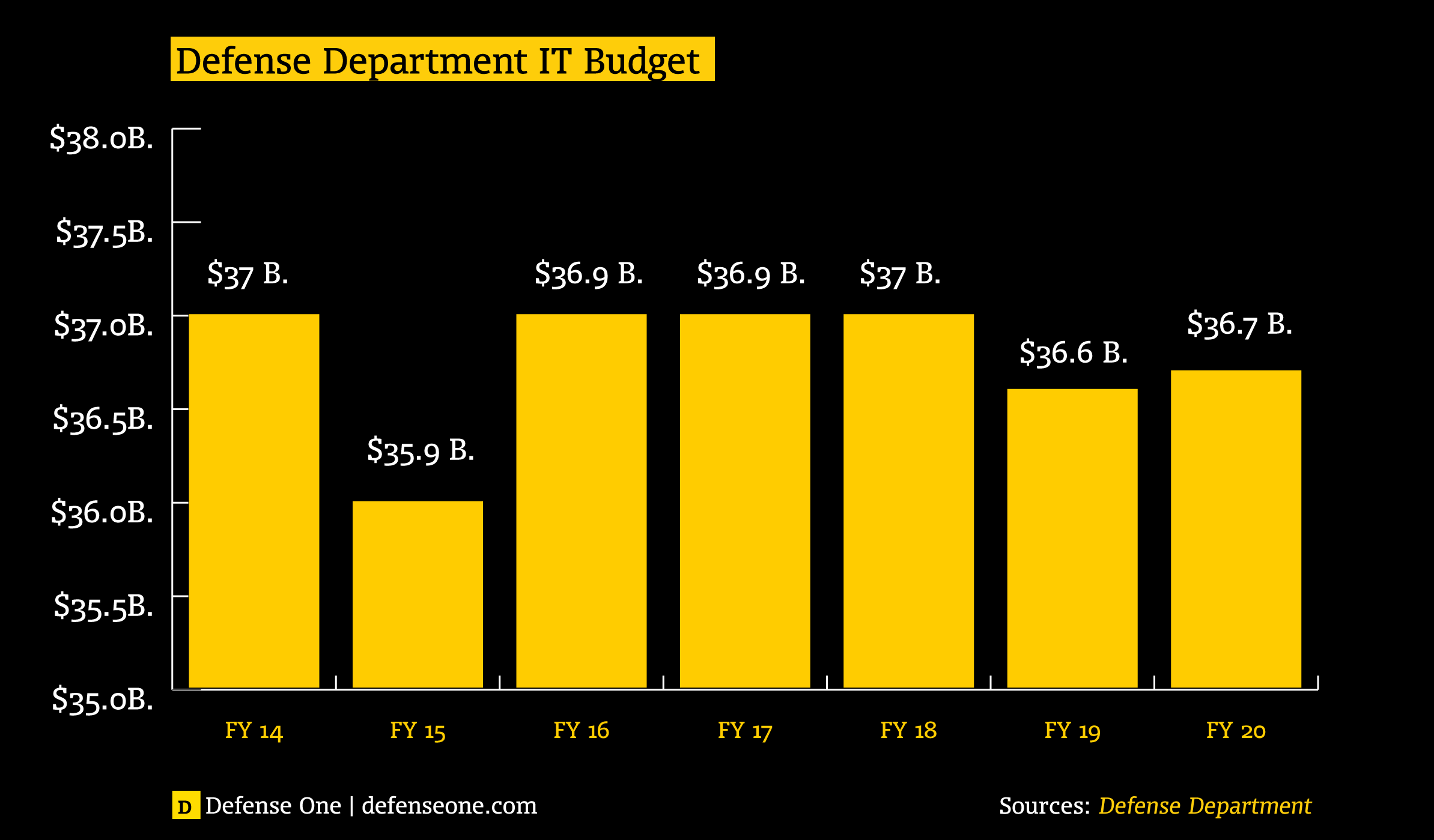 The criticality of the command’s troops was underscored Friday, when Defense Secretary Ash Carter chose them as his first stateside military audience.

“That should tell you something about how vital the mission is that you all have taken on, how important it is for the security of our country and, for that matter, the security of our economy and our people in their individual lives, because cyber touches all aspects of their lives,” Carter said at command headquarters in Fort Meade, Maryland.

Defensewide, cyber funding would reach $5.5 billion under the White House’s 2016 budget, with more than half of that sum going toward operations and maintenance.

But a significant amount would also be devoted to innovation. The "research, development, test and evaluation" request totals $1 billion. That’s more than double the amount slotted for procuring new tools.

The Air Force’s $1.4 billion piece of the 2016 cyber pie is significantly higher than the Army’s $1 billion portion. Air Force officials in recent weeks have voiced concerns that across the board spending cuts could hurt the branch’s technical supremacy, according to CNN. 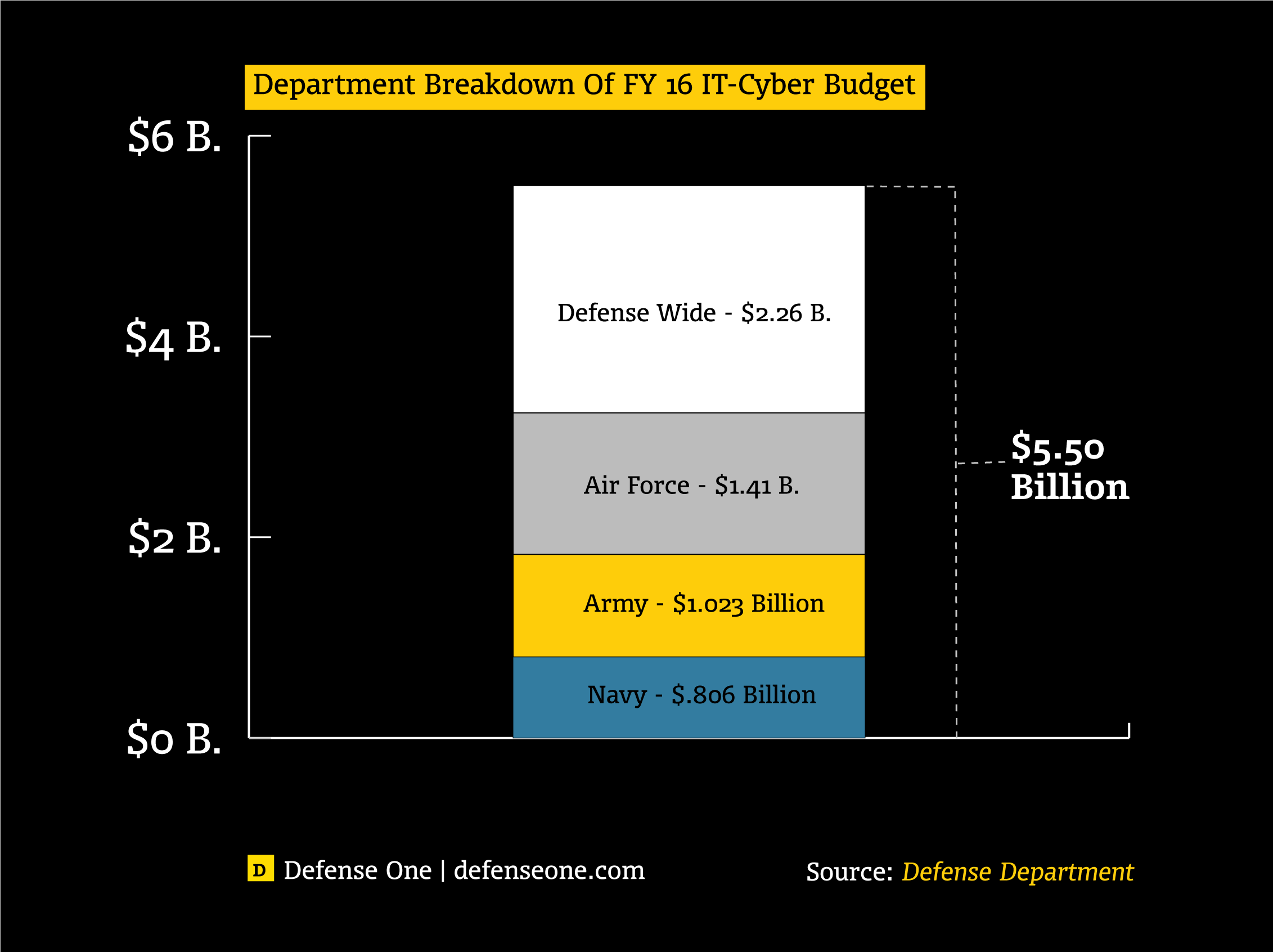 “The option of not modernizing isn’t an option at all,” Gen. Mark Welsh, the Air Force's chief of staff, told Senate lawmakers last month. “Air forces that fall behind the technology curve fail . . . And joint forces without the full breadth of air space and cyber capabilities that modern air power brings will lose.”

There has been some discussion of transitioning Cyber Command to its own military branch. But it won't be in the immediate future.

Defense does not want “to take too many jumps, organizationally, at once,” Carter said last week.  “We have given some thought to that. And for right now, we're walking before we run,” but “that's one of the futures that cyber might have.”

Currently, the goal is to prop up 133 mission forces teams, “with the majority achieving at least initial operational capability by the end of fiscal 2016,” Cyber Command chief Adm. Mike Rogers told House lawmakers earlier this month.  “I have been working with the services to accelerate the work we are doing to keep on schedule, but I can promise you that will not be easy," he said.

Any potential Cyber Command branch would be dwarfed by even the smallest of the armed services, like, for example, the $24 billion Marine Corps.

Correction: Defense budget documents initially provided to Nextgov reported U.S. Cyber Command funding was set to increase from $190 million to $364 million -- a 92 percent increase. However total Cyber Command funding is also provided through additional funding line items, according to U.S. Army spokeswoman Valerie Henderson. When all program elements are added up, total Cyber Command spending between 2014 and 2015 is actually set to decline from $546 million to $509 million -- a 7 percent decrease.

NEXT STORY: Navy To Increase the Number of Deployed Ships to the Middle East, Asia